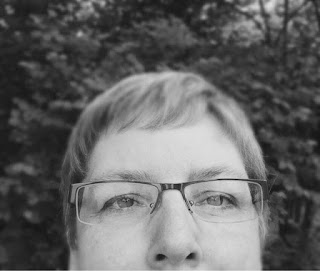 Lelainia Lloyd is a self-taught mixed media artist, writer and designer, as well as a wife and mum to a grown son. She was born and raised in Manitoba and moved to British Columbia in her late teens. While she will always consider herself a dyed-in-the-wool prairie girl, there’s no place else she'd rather live than on the beautiful west coast of Canada.

Most days Lelainia can be found in her studio, working on a stack of current projects, with the music cranked up so she can get into her creative groove. When she comes up for air, she’s usually outdoors with her husband and their beloved 10 year old black Lab, Indiana Jones (Indy) hiking the wilds, beach combing for small treasures and photographing the beauty of her world.

-Serving on a crisis line for 8 years.
-Riding a zipline across the streets of Vancouver.
-Rubbing elbows with world class athletes as an Athletes' Marshall for the Opening & Closing Ceremonies of the 2010 Winter Olympics.
-Being chosen as torchbearer #147 for the 2010 Paralympic Torch Relay.
-Presenting as a guest speaker at the 2010 Celebration of Ability.
-Competing in City Chase Vancouver with her son in 2011.
-Being selected as a Difference Maker medal bearer for the Rick Hansen 25th Anniversary Relay, 2012.
-Being awarded the Queen Elizabeth II Diamond Jubilee Medal in January 2013.
-Serving as a Community Representative for British Columbia for the MS Society of Canada in 2015 & 2016.
-Attending the MS Society of Canada's 2016 EndMS Conference in Toronto as a Community Member.

Lelainia's artwork and articles have appeared in numerous books, magazines, e-books and independent zine publications, including her own mixed media art zine, Manual Dexterity. She blogs for the Rick Hansen Foundation, the Canadian MS Society's Someone Like Me website and NMO Diaries. Lelainia has designed for Paper Artsy (UK), Paper Valise (Canada) and Hannah Grey (USA) and has appeared as a guest artist on both Breakfast Television and The Shaw Express.

Home
Subscribe to: Posts (Atom)
All content of this blog is copyright of Lelainia N. Lloyd/Tattered Edge 2004-2018 and may not be used in any way without permission. Please keep your karma good by respecting this. Thanks!