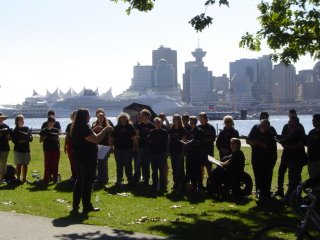 So as I mentioned the other day, I did managed to find time to go into Vancouver today with my guys and enjoy Stanley Park. It just happened to be the AIDS walk today along the seawall and several of my friends were singing in the park. I managed to get there for the last two songs, which was such a treat as they were in fine voice, as always! This is a rather bad photo of the choir, but there was nothing I could do about it-the sun was just in the wrong place. Nice backdrop of the city though, isn't it? 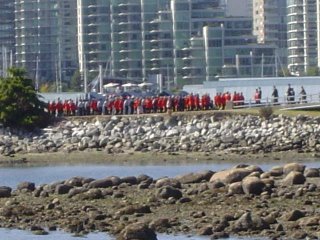 And what is this you may ask? It's hundreds of Royal Canadian Mounted Police, queuing up for a ceremonial march through part of the park. Today was the day on which this march is held nation wide to honour officers who have been lost in the line of duty. There were about 1000 law enforcement officers from all over BC along with a small American contingent. There were even police on horseback, in the air (helicopters) and on the water. (Harbour patrol.) It was amazing. 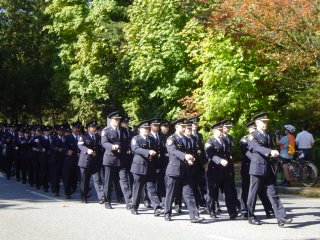 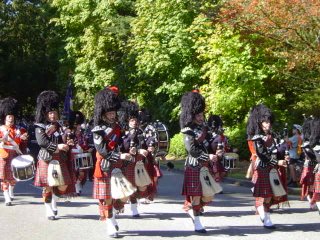 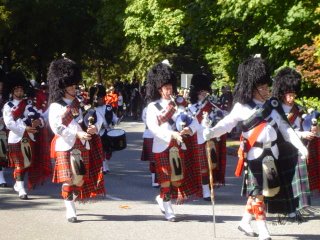 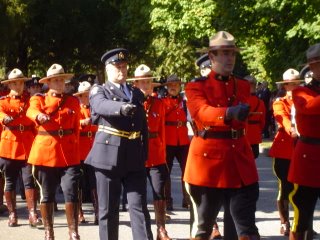 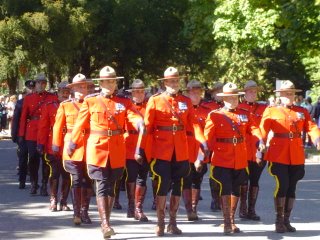 Members of the RCMP handsomely turned out in their red serge. Is there anything more beautifully Canadian than that?

Afterwards, we drove around to the high point of the park-Prospect Point Lookout and had fish and chips for lunch and ice cream for dessert. While we were standing by the lookout, peering over the cliffs at West Vancouver and the ocean, my son spotted a baby raccoon that had climbed up the cliff. He got a good picture of it. (My camera's battery had run out at that point.) I will get him to post it to his photo blog tomorrow. He also took some lovely photos of the trees there.

The park is just beginning to look like Autumn. Leaves are starting to change colour and fall. I plan to go back in about 3 weeks to take more photos. It was 22C today-a gorgeous day to be out getting some fresh air. I truly live in one of the most beautiful places in the world.
at 9:10 pm

What a beautiful day it looks like, Lelainia! I wish I could have seen that parade in person... the colors are amazing!
Hugs, Shari

I have always wanted to visit BC and you make Vancouver sound especially delightful. I must divise a way to visit...

(and I LOVE Vancouver!)

GREAT photos -- really enjoyed seeing these!!! My daughter is doing an AIDS walk in 2 weeks....