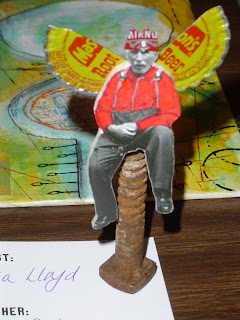 So my first class at Artfest was Perching Pixies with Stephanie Rubiano. I really enjoyed working with a jeweller's saw and the teeny blade. At first I thought it would be really hard to carefully cut out the image I wanted to use. I doubted that my first attempt would be clean and smooth, but surprisingly, it was! I have to give credit to my Gramps who blessed me with his mechanical ability.

The image I used was of my Gramp's grandfather. (My great great Grandfather, who was Gramps' mother's dad.) All I really know about him is they called him "old man Reimer" and he was from Russia. He was given a grant of land from the last Czar of Russia and so his family moved from Germany/Austria to Russia to farm. Eventually, they came over to Canada.

I managed to find a Smirnoff bottle cap, which I used to make his crown. And look at those teeny tiny screws. Yes, they are as small as you think they are! Stephanie gave us special teeny tiny screw drivers to work them with. I plan to mount this pixie in some sort of shadow box-it's not quite finished yet.

My favourite part of this class was spending time with my pal Gretchen who is just the loveliest person and also looking at all the wonderful pixies Stephanie has created. Working the saw created a ton of sawdust so I won't be making any more till the weather gets warm and I can work outside in the yard. That way I won't have to clean up the mess after-the wind will just blow it away! 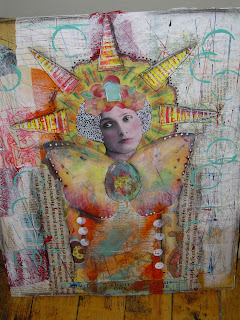 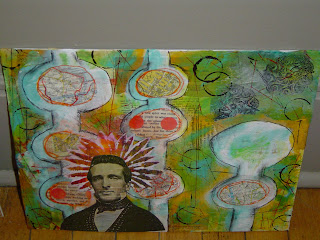 Friday's class was Personal Icons with Anahata Katkin. This was the class I was waiting for. Last year I saw the work that came out of Anahata's classes and I was totally taken with it. My goal for Artfest this year was to learn how to be more painterly in my work. I don't want to learn how to paint, per se, but to learn how to incorporate paint into my work.

The first canvass, "Again We Rise" has been completed and the second (with the man) is still a work in progress. Since I have been home, I have completed a smaller canvass and started another. I had a great time sitting with my friend Diane and playing with the paint. The class moved fairly quickly so we didn't have time to over think things and fuss it to death. We just kept layer and working the canvass until we ran out of time. I have to say it was really freeing to work this way. 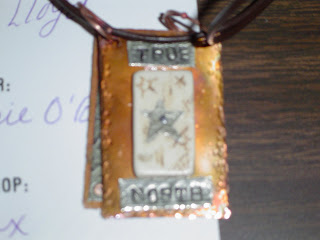 The last class on Saturday was Fe Fi Fauux with Linda & Opie O'Brien. I know this is the world's worst photo but I am recharging my camera's battery so it's going to have to do.

The idea in this class was to learn how to transform a piece of plastic to look like a piece of ivory. I also got to age some metal with a torch and draw a bead with the torch as well. Linda gave lots of help for those of us who were a bit intimidated by the torch. (I have immense respect for fire and flames, let me tell you!) I enjoyed the hammering part of the class. We hammered our metal to age it. It might be in part due to the fact that I had a nice new bench block and rivet hammer. I am a sucker for hand and power tools. There's just something so deeply satisfying about working with tools. 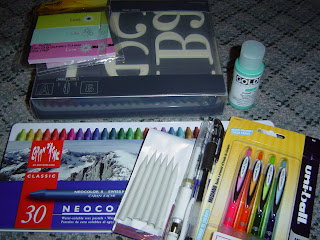 And of course, so trip would be complete without the shopping! The thing I bought that I am most excited about are the Caren D'arche crayons. We don't have them here in Canada and Penn and I managed to find these sets of 30. They were $54, but I believe worth every penny. I used Diane's in Anahata's class and fell in love with them. 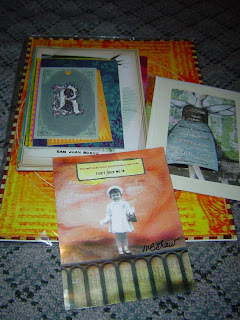 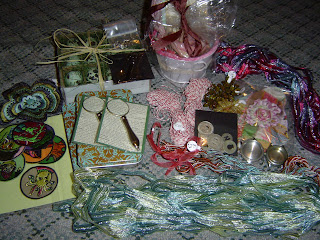 These are mostly the spoils from Vendor's night. Everything but the ribbons, which I got at the bead/wool store in town. And of course, an Arfest t-shirt and my wish list shoes! During Show & Tell on the last night, Lisa Call came to find me and tell me that a store in town was having a sale on the shoes I have been coveting for some time now. (Enabling, anyone? *laughs*)

I hopped into my car and flew down to the store. When I arrived, there were three women out on the street in front, but the store was closed. They had just come back because one was the store's owner and she realized she'd left a rack of clothing out on the street when she closed up. They asked what I needed and when they realized I was not only from out of town, but also out of country, generously agreed to let me in and sell me a pair of shoes. (That's the beauty of a small town for ya!)

They were completely out of red ones, which would have been my first choice, so I settled for buying these brown ones and I am happy I did-they will go with everything. They are extremely well made (as I remember from living in Spain and buying shoes there) and so I took them to the shoemaker here to have them stretched a bit. The leather is so thick it would take me an eternity to break them in on my own. I picked them up yesterday and they are now perfect! Once I was home, I discovered there are 3 stores in Vancouver that carry these shoes, so I will be buying another pair at some point, probably in red!

So, that's my Artfest. The time flew by so quickly and it was over all too soon. I had such a good time and now I am full of creative energy that will carry me through till next year....how many days till Artfest 2009?!?

Edit: Laura wanted to know what brand my new shoes are. They're El Naturalista.

Would it be possible to post what brand the shoes are?? They're great.
ArtFest looks just wonderful!!

So glad you got your shoes....you can also get them online and Amazon had a $30.00 off special on items considered "green". So now you know your size you can get them in all colors.

Your artwork was lovely and glad I got to see you and your art in person.

Hi! What an amazing time being had at ArtFest, thanks for sharing this lovely time. OOOOOOOOO all those goodies, just an FYI. "Currys" art store Canadian based does sell those crayons and they do ship
https://www.currys.com/
I am lucky to live within a few km of a real live store.
HTH
ANg

OH... looks like you had SO much fun!
I am so jealous I couldn't go this year..
LOVE the wonderful pieces you created!!!
:)))
xoxoxo

Thanks for showing pics of your work! I love reading a bit about your process in classes. They are all wonderful pieces.