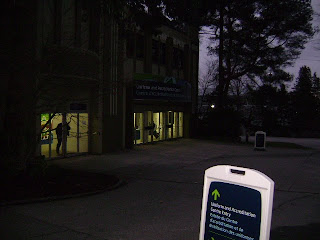 Well the day has finally arrived! I went and got my Olympic ID and uniform this afternoon! 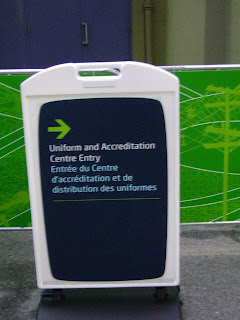 Yes, this is the place! 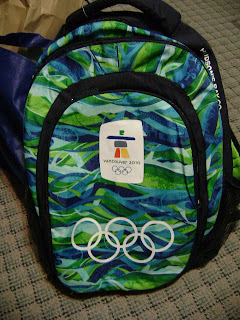 I bought myself the official backpack. There's nowhere to store personal items at the venues, so they came up with these backpacks for us to keep our things with us at all times. This was not included as part of our uniform, so I paid $55. 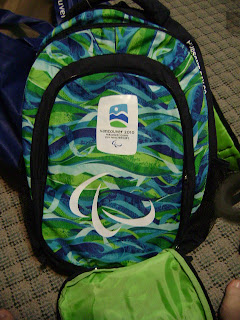 The backpack has a zipper that you unzip to remove the Olympic rings and underneath is the Paralympic agitos. They designed it so that you can covert the backpack and uniforms and use them for both games. This backpack is a limited edition, available only to volunteers. It's quite nice-lots of big pockets and comfy straps. 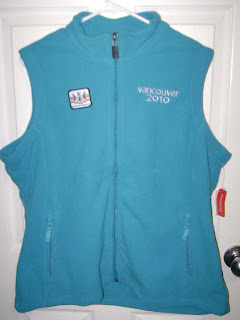 This is the polar fleece vest. 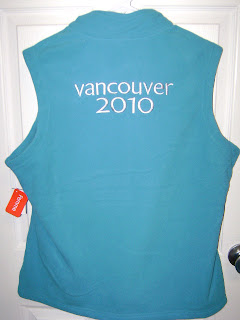 And the stitching on the back. 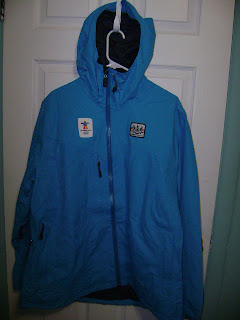 Here's the jacket. (Sorry if the pics are dark-it's night time here, so no natural light in my studio!) The jacket has a ton of pockets and a nice deep hood. What you can't see is that there is a wave pattern on the surface of the jacket. I have to look closely to see it. 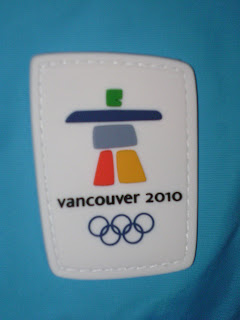 This is one of the removable patches on the jacket, which gets replaced with the agitos for the Paralympic Games. 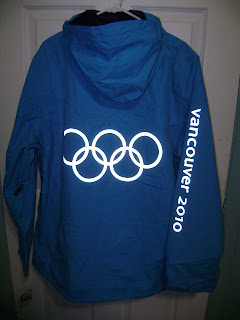 The back of the jacket has iridescent markings. Again, the rings will be converted for the Paralympics with a snap on conversion kit bearing the agitos. 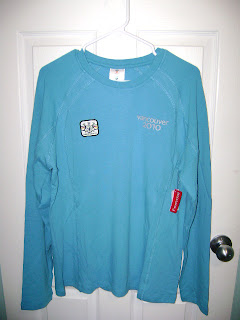 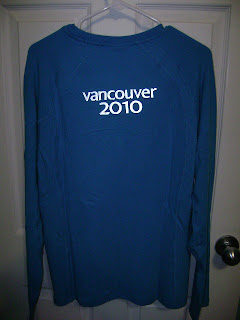 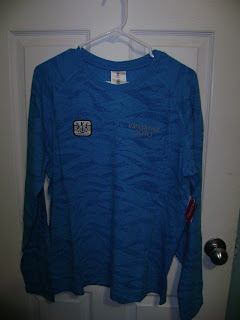 Shirt #2 has the wave pattern on it. 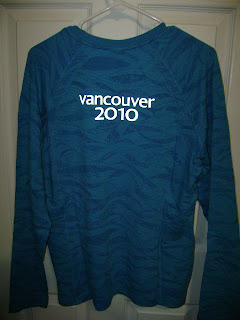 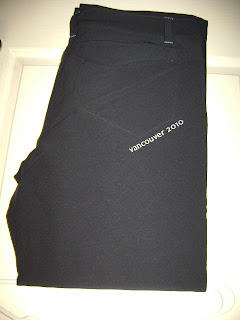 The pants are navy with turquoise stitching. These are the city pants which are unlined. 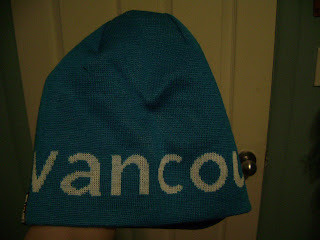 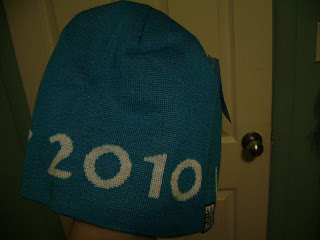 The accreditation booklet that explains the ID passes and related information. 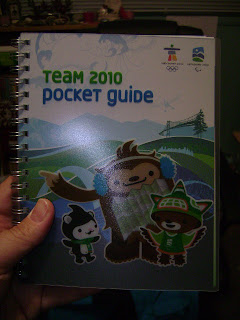 The pocket guide which is chock full of information we need as volunteers. It has everything from maps, to sports info, to relevant venue info. It's REALLY well put together and in addition to be useful for the games will also make a great keepsake. 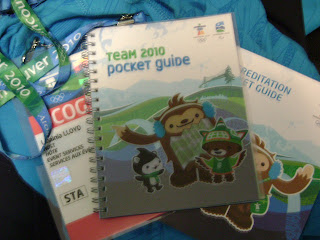 My goodies. On the far left is a peek at my ID pass. I didn't want to show it all because it has personal info on it, but you get the gist. It has a pretty lanyard that it hangs from. This will get me into my venue as well as on public transit for free during the games. 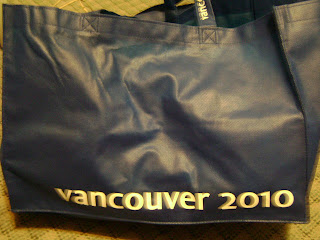 They gave us these reusable cloth bags to haul our booty home in. 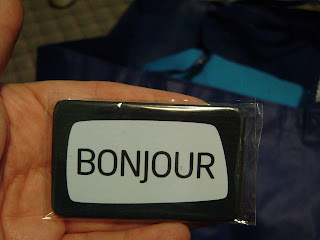 My last stop at the accreditation venue was a booth where a volunteer greeted me in French with "Parlez-vous Francais?". I responded with "Oui, je parle un peu de Francais." which apparently was the appropriate response he was looking for. He gave me the "Bonjour" pin, which means anyone looking for someone who understands French at the games will know they can talk to me.

French and English are not only the two official languages of Canada, but also of the Olympic movement. I was born in St. Boniface, which is the largest French speaking population outside of Quebec. I started French in kindergarten. While I haven't used it in years, I understand enough to be helpful. I also have basic Spanish, which I picked up from living in Barcelona, Spain. It will be really nice to put my language skills to use! I used them a bit in the summer at the Police & Fire Games. It's always nice to see someones face break into a smile when they realize you understand them in their own language. 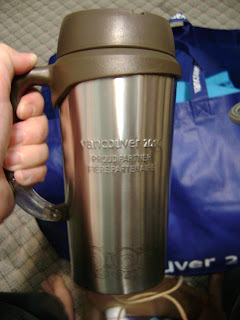 As part of our welcome kit, we got this great steel mug. 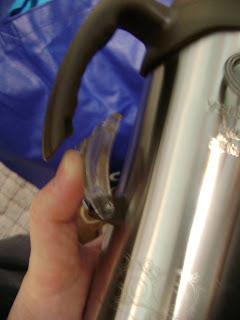 The mug has this latch mechanism in the handle so you can clip it onto your backpack. It also locks the liquid in, if your mug is full so it won't spill. I will get alot of use out of that! 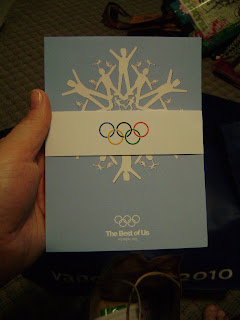 They also gave us a packet of special postcards. I haven't pulled them all apart to look at them all yet, but I like what I did see! 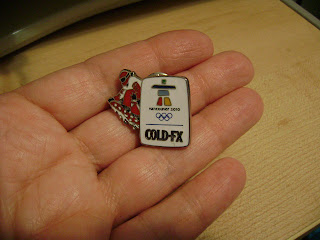 They also included a pin. This is the second one they've given me. I got one a year ago when I went to the initial training.

So...that's it now till the end of January when I go to do the venue specific training. I think at that point they will give us the yellow sleeve that we slip over our right arm to indicate we're events services personnel. (I refer to it as "the sexy yellow sleeve".)

Only 47 more days till my Olympics begins! February 8th (when they open the venue for rehearsals) is not that far away! It seems more real now, having put the uniform on and being issued my ID. I am so excited!! 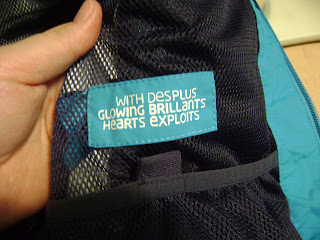 I have one more thing to share. When I opened up my jacket to see what kind of pockets were inside, I found this patch stitched on the left hand side, right where it will rest on top of my heart. It says "With Glowing Hearts. Des Plus Brillant Exploits." which is a line from our national anthem in both languages and the theme of our Olympic games. It was like a little secret, tucked there for each of us to find.

It made me all teary to know that each one of us, who has committed ourselves to serving our country and the athletes and citizens of of the world for this games, will wear this sentiment close to our hearts. It's perfectly reflective of the quiet patriotism that is so much a part of who we are as Canadians.

My heart is glowing with anticipation. Bring on the Games!

so very cool! I know how much you are looking forward to this, and I am excited for them to start, too. they will be extra special this year, because I will get to see things through your eyes, so to speak. :)

What a fabulous package Lelainia and I love how it converts for the Paralympics as well -- you can see they were really putting thought into what they were doing.

I think what touched me most is the stitched piece inside that sits over the heart. The most appropriate part of O Canada to keep close as you watch over these events and these athletes and all the visitors who will be attending.

How wonderful is this - my word verification is "blessed"!!! You are!

I think all of this is majorly cool (especially love the special words over your heart....).

Thank you for sharing it with us. The Games will mean even more to us spectators, knowing all these details, when we watch from afar.

Thank you for sharing this incredible journey you are on. How very exciting! I look forward to the journey before you.xoxoxoxo

This SOOOOOOOOO ROCKS! How cool to actually know someone who is: a sweet, wonderful, talented soul - AND an Olympic rep! I really look forward to seeing the in's & out's of the Olympics through your eyes.
LET THE GAMES BEGIN!

Wow I am so surprised they let you show all of that. I know when my son worked the games in Utah the security was so much tighter. He had to be there almost 6 months ahead of time and there were no showing anything to the public. Much less their id's, badges, etc. I know he had endless security meetings and training.
He had a great time and it was a wonderful experience. I am sure you will have a blast!

so very cool! i'm so JEALOUS!
we are a huge ski family (if you haven't noticed during my winter blog postings) and we are thinking about trying to come up to watch one of the ski events. i'll let you know if we do so that maybe we can run into each other and meet in person!!!