Scenes From My Day 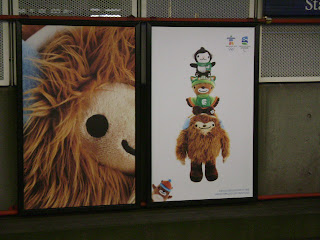 I spent the afternoon in Vancouver doing venue specific training today. It was trying hard to rain, but luckily it didn't, which made for a nice walk along the False Creek sea wall. The photo above is a cute little billboard in the skytrain station. Those are the official mascots of the Games. 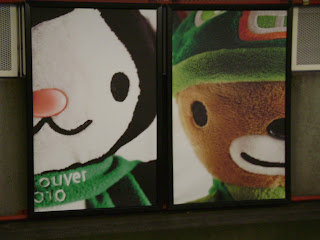 This is another. I had just enough time to snap pics before the train rolled in. 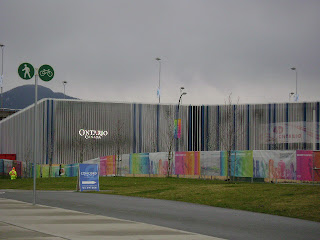 As I mentioned yesterday, all the provinces, save for one (New Brunswick, if I remember correctly) are having "houses". This is Ontario's. Where it says "Ontario" is a big flashy digital sign. 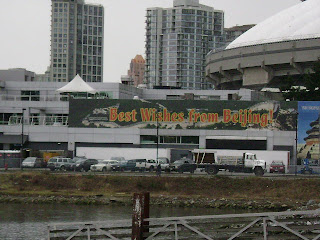 And apparently Beijing wishes us well for our Olympic games...I am not sure if this is China's house or not. 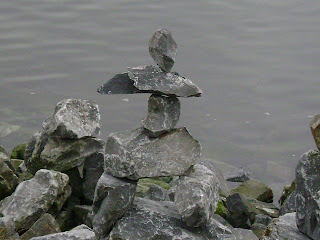 Along the wall was a long stretch of inunnguat. For those uninitiated, these are stone cairns formed in the shape of man and created by the Inuit people of the north. It is also the official symbol of the Olympic Games. Someone has been building them along this stretch of the seawall for visitors to enjoy. I was surprised to find so many! 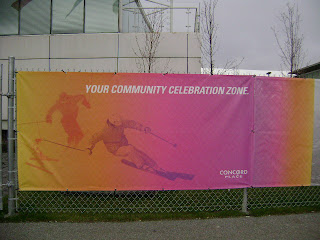 Ah the celebration zone! It's still a work in progress! This is where all the provincial houses are. 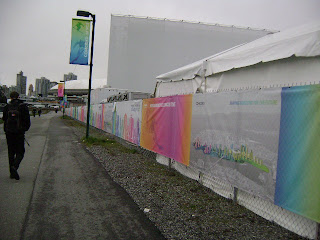 So many colourful banners... 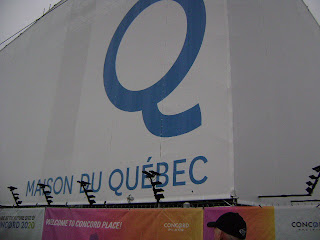 Quebec house. Poutine anyone?! *laughs* I think poutine is one of the few dishes we can truly call Canadian. If you don't know what it is, you need to Google it! 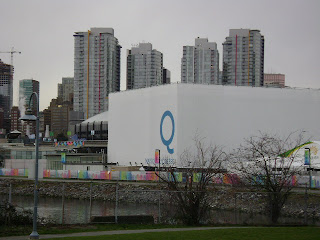 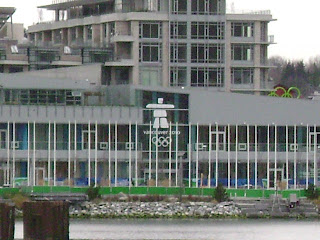 The athletes' village. I see the flag poles are ready to go! It's going to be quite a sight when they're all flying! 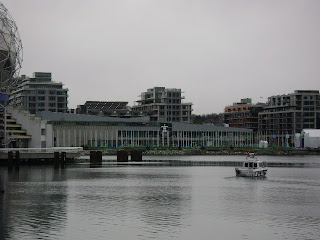 More of the village. 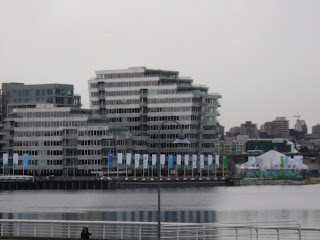 Another shot across the creek. 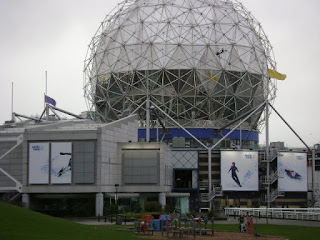 Science World that is being transformed into Russia house. They have a fancier name than that, but I can't recall what it was. If you look on the link for free entertainment that I posted yesterday, it will tell you. 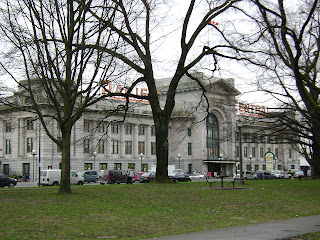 This is the train station at Main Street. We parked here (my husband drove me) and he walked me to the venue. I think this is such an elegant building. I love the architecture. In all the years I've lived here, I have never been inside. The next time I am in the neighbourhood, I am going in! 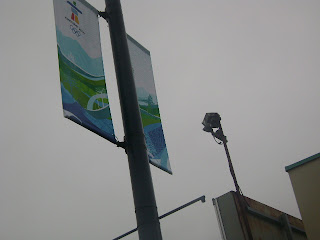 This is a rather awkward shot, but I wanted to show you the flags on the poles in Vancouver. They have Olympic flags on each and every one and it's such a sea of colour going down the streets. There are flags like this in my neighbourhood too, but they have images of the torch relay on them, marking the route the torch will be taking in less than 2 weeks.
7 days and counting!!
at 9:35 pm

Oh Lelainia, what an exciting time for you. The pictures are beautiful. And you look super cute in your uniform. Just keep those pants on girlie!
Tracy

Lelainia, I had never heard the word "inunnquat" before reading it on your blog, all this time I thought it was an inukshuk. Found this Wikipedia entry to be most informative! Now I've learned my new word for the day!
http://en.wikipedia.org/wiki/Inukshuk