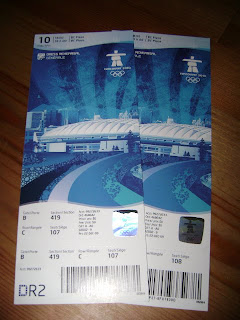 I am *so* excited. This morning I went downtown to pick up some special tickets. Each of the volunteers for the Olympics has been invited to a special dress rehearsal of the Opening Ceremonies. Since I and the rest of the Events Services Team will be volunteering at the venue while this is going on, we were able to give our ticket to a family member and if we wanted, to purchase one additional ticket. My husband and son will get to enjoy my tickets and I am excited for them to have this opportunity!

My husband decided to come downtown with me, since he had the day off. We got up early and arrived at the pick up point downtown at 8:30 a.m. By the time we got there, the line (yes, there was a line!) wrapped around the block. We joined it and while it took an hour to enter the building, I didn't really mind-I got to chat with other volunteers and compare notes. 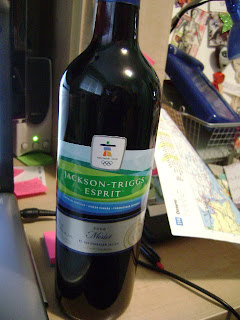 Once I got into the building, I was in and out in under 10 minutes, tickets and this bottle of Merlot in hand. It kind of cracks me up that every time I go to an event, they give me something. The last time I got an Annie (CPR dummy) in a box. This time, a bottle of wine! 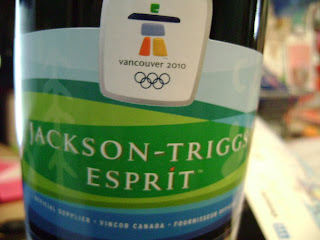 It's Jackson-Triggs Esprit, a BC made, 2008 Merlot bottled especially for the games. 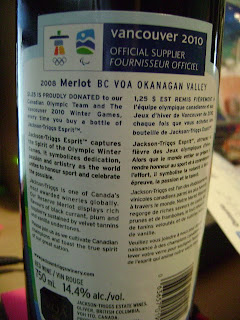 The label on the back says that for every bottle sold, $1.25 will go towards the Olympic athletes. Ironically, I don't drink, but I may be tempted to open this one and taste it. I can always cook with whatever's left over!

On our way back to the Skytrain, we ran into two gentlemen my husband knew. One had his accreditation on and asked me what I was doing during the Olympics, so I told him. I asked what his job was and he's got a cool one. He's overseeing the referees for the hockey games.

You know how when a ref makes a call and then skates over to the boards and consults with someone in the special booth about their call? Well that's what this man is doing-he's the person they consult with. I was kind of impressed with that because it's a job I'd never given much thought to, but I realize how really important it is! I will be watching to see if I can spot him when the hockey is on. (I am taping everything when I am not home to watch it.)
They were just heading over to pick up their tickets, so they asked how long it would take. I told them about the lineup. I am really glad we arrived as early as we did, so we got in and out in about an hour.

So...tomorrow's the big day-I begin my Olympics! It was just a tad nippy this morning, (The wind was cold) so I think I will be bundling up tomorrow. Good thing I bought wick-away micro fibre long johns-I might need them after all.

This is all so exciting! Have a great Olympics and I look forward to hearing all about your experiences. xoxoxoxo