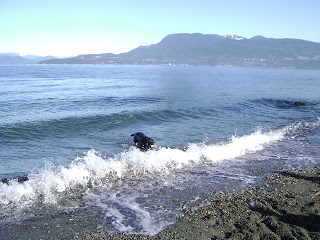 We went into Vancouver this morning to Spanish Banks to take Indy for a swim. It's a balmy 12C here today! This is the first time he's gone swimming in the ocean. He's splashed around in the tide line before out at Crescent Beach when he was a puppy, but all of his swimming has been in either rivers or lakes. I wasn't sure how he would be with waves, but being a true water dog (and a Pisces!) he didn't seem intimidated at all. 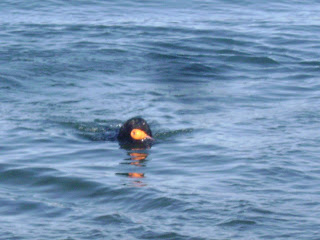 When we take him for a swim, he's interested in one thing only: fetching either a ball or more often than not, his aqua Kong. We have three of these and they are his favourite beach toy. This one is brand new, a freebie from the Kong company.

I'm telling you, when it comes to Labs, it's the only thing that stands up to their love of gripping something with their paws and chewing. Labs have webbed toes, so they seem to be more adept at using their paws like hands than most dogs, which results in them being able to rip things apart easier. We've bought many, many other toys and they last about 5 minutes. Indy has a Kong he's had since we first brought him home. He's gnawed that thing to death and it's still perfectly fine. Best money I ever spent, really! 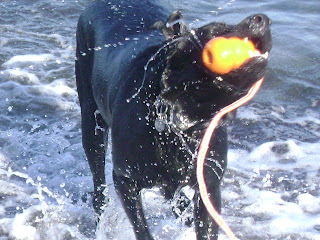 I love this pic- that's sheer, unadulterated joy right there. 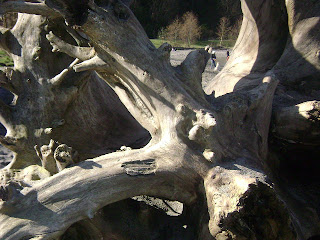 There's this gnarled old tree stump on the beach. I like the way it's all twisted and the bark has been stripped off by the wind. 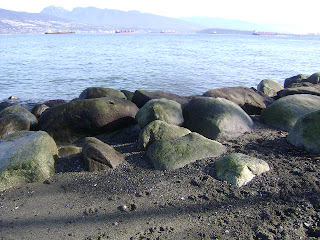 View looking towards the North Shore of Vancouver. 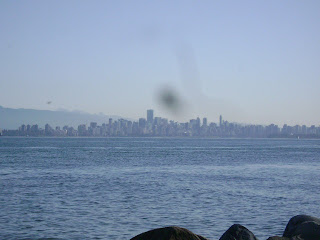 ACK! This would have been a nice shot, if I hadn't gotten water on the lens. I didn't even notice-Indy kept coming up to me and shaking off and must have gotten the camera wet. Well...it's downtown Vancouver, anyway.

I had a couple people on the beach ask me about my Olympic experience, as I was wearing my blue jacket. One thanked me for volunteering, which, while totally unexpected, was very nice. It's nice to be appreciated.

It was good to get out for some fresh air and quality time with my sweetie and our dog, especially since I haven't been home much in the last 5 weeks.

While I am thinking of it, I wanted to thank everyone who either posted, emailed me or called to say such lovely things about my upcoming Torch bearing for the Paralympic Torch Relay. I am deeply touched to hear such kind words and thank you to everyone local who said they would come cheer me on! Only 5 more days!