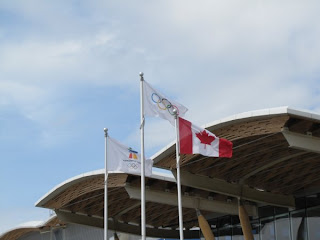 This weekend was the last chance to go to the Richmond Oval and skate on Olympic ice. Having worked the entire Olympics, I didn't get a chance to go see the oval before, so we headed down to check it out. 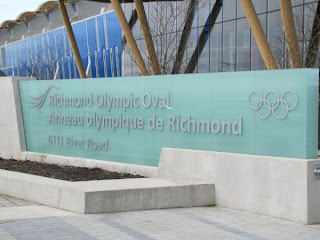 The line up was long, but it moved fairly quickly. We've been having some wicked wind storms this past week. Yesterday, standing in line was bitterly cold. The oval is a stone's throw away from the airport, near the water, so there's nothing to block the wind and it was bone chilling. I had my "blue jacket" hood pulled tight and a toque on underneath. BRR!! 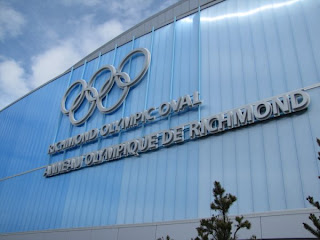 The building is beautiful. It's a wonderful piece of modern architecture. 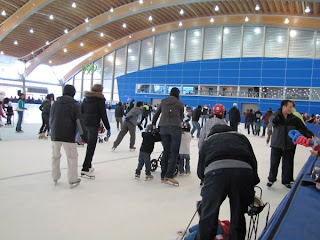 You can see a bit of the interior of the roof in this shot. It's all natural wood and they way they've pieced it together is simply gorgeous. It looks like it's tongue in groove.

As you can see, it was quite crowded. Lots of families there. 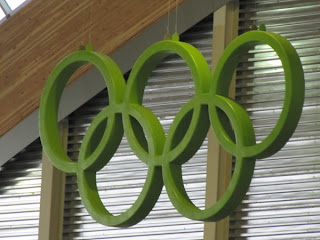 One thing I learned from going there is that the ovals that speed skaters use are really large. It's deceiving when you see it on TV. Skating it is quite something-it felt like it took forever to go around. I can't imagine skating it at breakneck speeds!

The other thing I discovered is that there is a stair case that comes up right in the center of the rink, in the middle of the ice. It leads down to the athlete's change rooms. It looks so odd!


Sadly, the ice itself was less than optimal-it wasn't up to Olympic standards, that's for sure! The finish was quite bumpy and pock marked, even after it had just been cleaned. I guess they weren't worrying about it too much since it's coming out shortly. 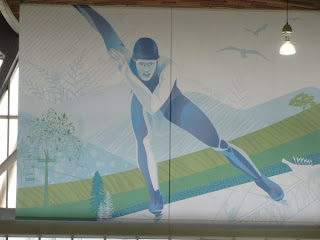 I never get tired of seeing these banners. Skating was really quite inexpensive-$2 to get in and $3 for skate rentals. We all skated, but I didn't stay on the ice very long. It's incredibly difficult to keep your balance when you can't feel your feet and don't have any proprioception. 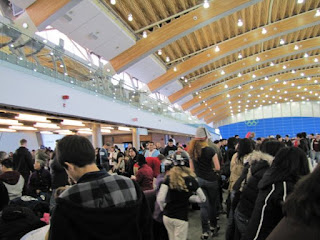 Up top on the mezzanine there is a work out area with bikes and weights and other exercise equipment. They will be converting the oval into a multi-use sports complex after this weekend. 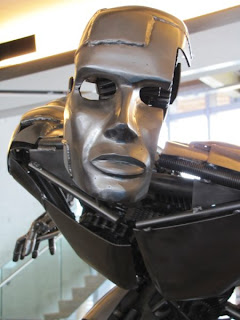 This sculpture is really cool. I have no idea who made it-there wasn't a plaque saying who the artist was. It's a cyborg/steampunk style skater. 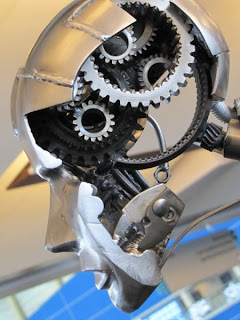 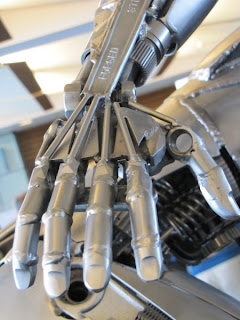 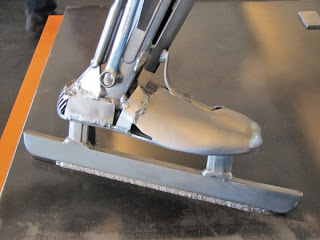 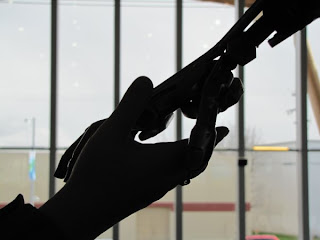 Cyborg skater handshake! I didn't know if we were allowed to touch it or not, so technically, I'm not touching it. *laughs*

Another Olympic experience to tuck away in my memory.
It's a good one!
at 4:12 pm