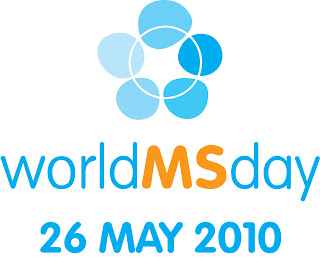 Today is World MS Day. I thought I would take a moment to share with you a bit about the disease that claimed me as a member of its club. I don't usually post about this kind of stuff, simply because I don't believe it does me any good to dwell. I tend to cope with difficult things by sucking it up and moving foreword because that's just how I roll, but I hope you'll take a moment to read this post and perhaps think about those of us who deal with this unpredictable disease every day.

Some facts about Multiple Sclerosis:
-MS is unpredictable, affecting vision, hearing, memory, sensation, balance and mobility. Its effects are physical, emotional, financial, and last a lifetime. There is no cure.

-MS is not contagious nor is it hereditary. Children who have a parent with MS have only a 5% chance of developing the disease. Coincidentally, my husband's paternal grandmother had MS. I am sure he never dreamed that someday his wife would be diagnosed and the same disease would touch his life twice.

-Canada has one of the highest rates of Multiple Sclerosis in the world. An estimated 55,000-75,000 Canadians have MS. Every day, three more people in Canada are diagnosed. Women are more than three times as likely to develop MS as men.

-Most people are diagnosed in the prime of their lives-between ages of 15-40. I had my first attack 2 weeks after my 30th birthday. I was diagnosed in March 2008 at the age of 37 after a particularly severe attack.

-Multiple Sclerosis disease modifying drugs range in cost from $20,000 to $40,000 a year, and symptom-management drugs can cost up to $10,000 a year. These drugs are not a cure-they just (hopefully) lessen the length and severity of attacks. I give myself an injection daily. I've been through the wringer with treatment, trying to get into remission. I've even had to go through chemo, but that too was unsuccessful.

In the face of all this, you find out who loves you. It's one of the gifts of having a serious life-altering illness. I've been lovingly and unfailingly supported by so many special people. (You know who you are!) I am lucky. I have people who have my back.

I want you all to know that I don't spend a single second feeling sorry for myself. If you read my blog regularly, you know that I am still out there chasing my dreams. In 2010 alone, I've lived my Olympic dream, rubbed elbows with world class athletes, carried the Paralympic torch, been published, celebrated my 39th birthday and just 5 days ago, got inked for the first time. (And that's the just highlight reel.) MS has sadly underestimated my sheer force of will.

That said, you will indulge me for posting a link in case anyone is moved to take action and make a donation to the MS Society. Just know that if you do so, every single dollar counts. The MS Society has done so much to help and support my family and I. The work they do on behalf of MS patients is so important. They not only help us with every aspect of the day to day challenges, but they are striving for a cure.

MS was first identified in 1868. That's ONE HUNDRED AND FORTY TWO YEARS AGO!!

Seriously, it's time to end MS.

My prayers and thoughts are with you as you struggle day to day with this horrible disease. I have a really good friend with it and she is still fighting the disease. I am unable to donate right now but will when I can to help cure MS.

Thanks for sharing your story. :) I appreciate it.

I was so touched by this post. I just found out that my sister in law has MS and I'm devastated by the news. I feel helpless. I'm part of the ROD group and have been enjoying reading your blog once in a while but had no idea you have MS. I truly admire your spirit and courage! Thank you for talking about it and educating people.