Just when you thought I was done talking about the 2010 Olympic & Paralympic Games...*laughs* Yes, I have more to post!

Yesterday I went to pick up my mail and lo and behold there was a card indicating a large item to be picked up at the counter. I traded the card for over sized Xpresspost envelope, which I had to sign for. Once all the formalities were taken care of, I flipped it over to see where it was from-I wasn't expecting anything other than a prize I won (more about that in a later post) and it certain wouldn't be flat! Imagine my surprise when I saw the return address belonged to VANOC. (The organizing committee of the 2010 Games.)

I didn't even leave the post office before I ripped it open to see what they could possibly be sending me now. There was a letter from John Furlong, president of VANOC (Remember I got a photo with him at the Paralympic Torchbearers' party?) It indicated that they were sending the Blue Jackets a special DVD to commemorate the behind the scenes work we, as volunteers of the Games did. The DVD is called "Behind the Moments/Dans Les Coulisses". It's about 2 1/2 hours long and broken into 4 segments. I watched it last night and it's incredible. 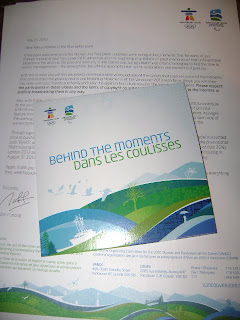 There were a couple specific things in it that stood out in my mind. In one segment, John Furlong talks about some of the preparation for the Opening Ceremony. He tells a story about how he was in a meeting discussing with David Atkins the idea of Rick Hansen wheeling up the ramp to bring the flame into the stadium for the lighting of the Olympic Flame. David tells John that there's no way Rick is going to be able to wheel up the ramp-that it's a theatrical ramp, not a wheelchair ramp and that even he has tried it as a fit person and and can't manage it. He insists that someone will have to push Rick up the ramp. John in turn tells David that it will take a bigger man than he to tell Rick Hansen he can't do something and there's no way John's going to call and tell Rick it's not possible.

David gets Rick to come to the stadium to test his theory that what John wants is just not going to happen and to his utter amazement, Rick wheels himself up the ramp under his own steam on his first try. David calls John to tell him to which John replies "Well of course he did-he's Rick Hansen!"

Years ago, as part of his Man in Motion Tour, Rick Hansen wheeled himself up the most brutal hill in Coquitlam and the steepest one he encountered on his world tour. 20 years later, he did it a second time. Clearly David Atkins had no clue how deeply he underestimated Rick Hansen's ability to move mountains! I was deeply amused by this.

The other thing that I loved on the DVD is a 30 minute montage of photographs from the Games. One photo in particular stays with me. It was taken up on Cypress, home to all the alpine events. The backdrop is snow and a safety fence with the Games colours on it. Standing right in front of the fence is a pair of leg prostheses with a folded sweater resting on top of them. When I saw that, I immediately thought the caption for that photo should read "Gone skiing." It was such a powerful image, speaking to the ability of the human spirit to rise about limitations. That image spoke volumes.

As John Furlong said at the end of the video, there are so many stories of the games, seen and experienced by the volunteers that the world will never know. But, as he pointed out, the important thing is that we, the Blue Jackets know those stories. I have so many stories myself that either never made it onto my blog or that I only mentioned only in part, simply because I was far too exhausted at the end of the day during the Games to go into great detail.

I really wish there was a book to compile them in. I would love to write that book-I would love to hear all the stories and to re-experience the Games through the eyes of my fellow volunteers. Can you imagine? That would be a dream within a dream for me. If only!

I mentioned a couple of posts ago that I was featured in the Summer edition of Shared Voices, the MS Society's Lower Mainland Chapter newsletter. If you'd like a peek, you can click here. The article is on page 7, so scroll down.

I have more Games related news, but I won't have details for another month or so. I'll spill the beans once I know what the plan is, hopefully by late August. I am really excited about it!

In totally unrelated news, because so many readers have asked, an Indiana Jones update: Indy saw our sweet vet (I love our vet) this morning and he got a clean bill of health. A week's worth of medicine and TLC cured his eye infection. YAY! Thank you for asking after him and wishing him well. He sends you all puppy kisses. xoxo
at 10:36 pm