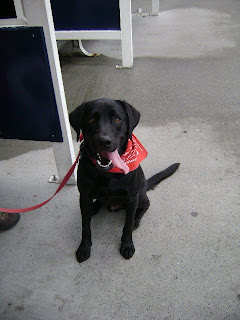 Well, here's Indy decked out in red to celebrate Canada Day. He's smiling because he's waiting for the little water taxi, which he loves riding to take us to meet up with my friend Jenn at Granville Island for Canada Day celebrations.

They had a special deal on for the holiday. If you and a friend were dressed in red, you could ride two for the price of one. It was a real deal because round trip for two adults is $22, so today my husband and I rode for $11! (Dogs always ride free!) 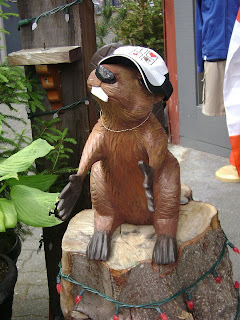 Even this beaver was dressed up. *laughs* 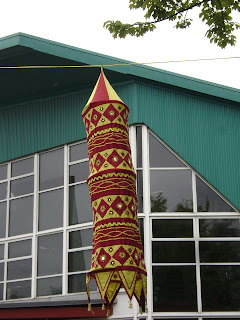 These were hanging in one of the celebrations sites. They're made of fabric. I'd love to have one, but I didn't see any for sale. Too bad! 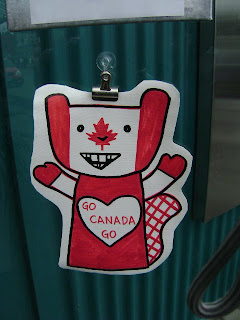 This was cute. It's printed on canvass and was a hold over from the Olympics. Who doesn't need a beaver puppet? 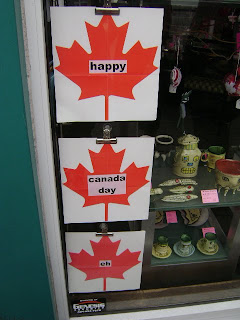 Holiday wishes in a shop window. 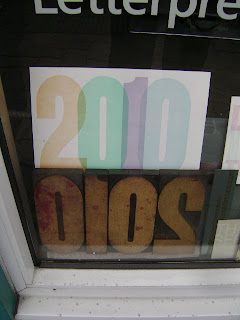 This I am posting mainly for my pal Penn, who loves typography as much as I do. These number plates were a good 12 inches high and 6 inches wide. I wish I could have them! They were in the window of a print shop I didn't even know was down there. 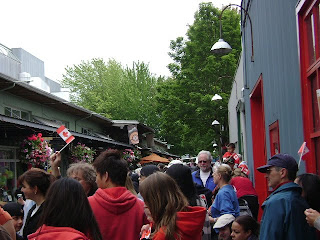 Just an idea of the crowds yesterday. It was overcast and cool, but people still turned out to mark the day. 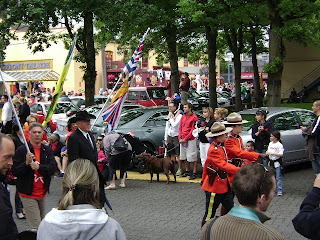 There was a small parade through the streets. I always love to see our RCMP members in their red serge. 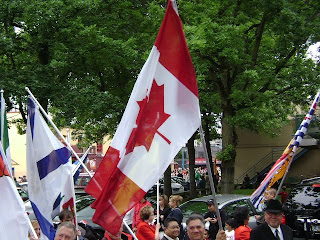 The guy carrying the Canadian flag was having fun waving it as he marched along. There were flags from every country in the parade, reflecting the cultural diversity that blesses our country. 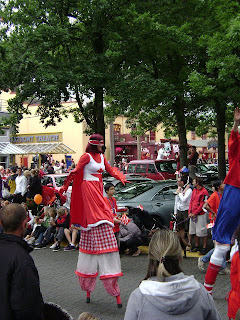 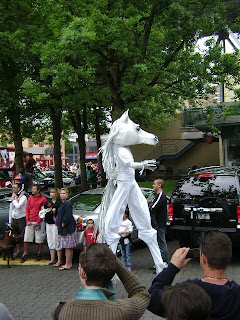 I would think it would be hard enough to walk on stilts, never mind wearing a huge horse head mask while you're doing it! 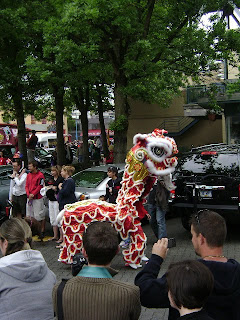 Along came two Chinese dragons and a whole host of drummers behind them. Because we're situated on the Pacific Rim, we have a large community of Asian immigrants. The dragons are a familiar sight. 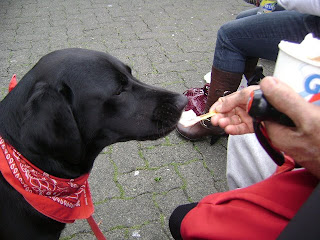 Here's Indy enjoying vanilla bean gelato, his favourite treat when we go to Granville Island. He's just a wee bit spoiled. *grins* He was a good sport today-so many people wanted to pet him and tell us how beautiful he is. He always attracts alot of attention when we take him out. We think he's pretty special too!

Some of you may not know, but the Queen and Prince Phillip are here visiting Canada. They spent the day celebrating our birthday in our nation's capital, Ottawa. I wonder what they thought of The Barenaked Ladies? *laughs*
at 8:17 am

The water taxi lets you bring your pooches? Hooray! I love the pet friendly businesses.