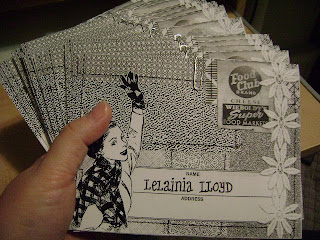 Art is still being made here, though at a snail's pace as it's been 30C here in the last week and the studio (and whole house for that matter) has been unbearably hot. My brain doesn't work in the heat, so I've been camping out in my bedroom with the air conditioner running full tilt, reading or surfing the 'Net while Indy snoozes at my feet. At the risk of being thought of as some sort of a seasonal scrooge, I will confess that I loathe summer. Bring on October! 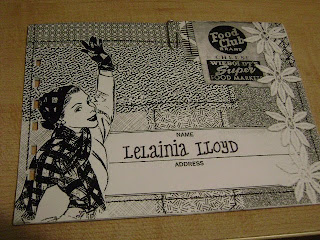 Anyway, I've been working on my pages for a collaborative Penn is hosting. We had to alter envelopes and then make some sort of goodies to go inside. There were 17 in all, so it took awhile. Above is the front of the envelope... 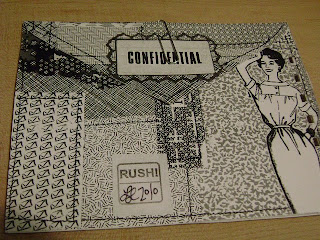 ..and this is the back. The background was made from the insides of security envies, cut and sewn. They were all different colours, but I wanted to go with a classic black and white look, so once I had the template of what the art was going to be, I copied it as black and white. I was thinking about the Recipe Clubs they used to have in the 50's. I won't share what's inside for now because that's going to be a surprise. Now I just have to work on the covers for my copy of the book. 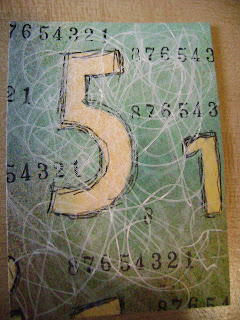 I was making ATCs a couple weeks ago for our monthly swap and came up with these. I used number stickers as a mask on a master sheet and sprayed alcohol inks all over. Then I removed the stickers and cut the sheet into ATCs. Once I had a stack of cards, I added squiggles with a white pen, messy outlined the numbers and stamped with an office stamp. I like just messing around and seeing where it goes. I liked how they turned out so I made a few extra and I'm going to use them in a future ROD journal.

I'm working towards deadlines on a couple of other projects, that I can't talk about at the moment. Some clouds rolled in late last evening, so I'm hoping to be able to have some studio time over the weekend, in between outings we have planned. We'll see if that pans out.

Off to put a picnic lunch together and then we're taking Indy for a dip in the ocean!

me too! I detest summer! UGH!!! I long for crisp, cold air, sweaters, cocoa and tea, cozy evenings by the fireplace.

Wow, these are fantastic, Lelainia!

Ol' Tuna!
Another fab book involving you & Penn - no suprise that it's looking fantastic! Luv the black & white covers :)