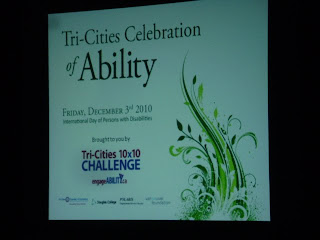 People have been asking if I would post the speech I gave last Friday at the Celebration of Ability. Your wish is my command-here it is!


I’m incredibly pleased and honoured to be invited here today to share with you my experience with the 2010 Olympic & Paralympic games.

I’ve been in love with the Olympic Games my entire life and as little girl, I can remember wishing that someday, somehow, I would have the chance to be involved with the Olympics. I was absolutely elated when Vancouver won the bid to host the 2010 Games. While preparations were underway, I was diagnosed with Multiple Sclerosis, an incurable and progressive neurological disease, but I was determined that I would do everything in my power, not to miss the chance to fulfill my life-long dream.

During the Olympics, I served as an Event Services volunteer at the Stadium. Two weeks before the games started, I got a phone call. There was a woman with a thick Australian accent on the other end, talking so quickly I was having trouble understanding what she asking me to do, but I said yes anyway.

I‘d made up my mind that I would go into this experience with an attitude of “YES” and whenever I was asked, I would serve in whatever capacity was needed. I’ve learned over the years that when you step up and give as much as you can, in every way that you can, you get so much more in return and more often than not, what comes back to you far exceeds anything you could ever envision. What I had unknowingly said yes to was being directly involved with the athletes of the world during the Opening and Closing ceremonies. At that point, I thought WOW! This is absolutely incredible!” I didn’t think it could get to get any better than that...but it did.

When the Olympic torch relay was being organized, I was so caught up in

preparing to volunteer at the Olympics that the whole thing just blew right by me. I, did however, watch the torch run, thanks to the brilliant relay route information given by Mayor Stewart on Youtube. (Which incidentally was so entertaining, that I actually watched it several times.)

Last December, the call went out for people to apply to carry the torch in what was to be Canada’s first ever Paralympic Torch Relay. I applied online and as soon as I’d done it I told my husband that I knew I was going to be a torchbearer. Just so we’re clear, it had absolutely nothing to do with ego. I simply understood with every fibre of my being that I’d stepped out in faith and the universe was going to rise to meet me.

January 10th, I got the confirmation call and no one was as stunned as I was. For some reason, even though I live my life intuitively, I am continually surprised when it pays off. As part of the official process, the gentleman from VANOC informed me that I had to pass a skill testing question. He started

rattling off an equation while I madly scrambled for a pencil and paper and thought “DAMMIT JIM! I’m an artist, not a mathematician!” and while thankfully that did not pop out of my mouth, I did say “You do know that if I mess this up, it’s going to destroy me right?” He laughed and reassured me that he’d give me several chances, if need be. I am proud to report that somehow, I managed to come up with the correct answer, without a calculator, on the first try.

As it turned out, I was scheduled to run the torch during the 24 hour relay, which took place on March 11th and 12th in the downtown core near Robson Square. I arrived at the rendezvous point at 1 a.m. (or as I like to refer to the wee hours of the morning, o’dark thirty) to prepare for my leg. My team of 8 was collected and one by one, we were issued our torches and asked to share a bit about ourselves.

After we’d each had our turn, our team leader pointed out that she’d heard each of us say we were lucky to be chosen to carry the torch when really, luck had very little to do with it. She explained that VANOC and the Paralympic Organizing Committee wanted us to know that we were specifically chosen for being people who inspired others in our every day lives and embodied the Paralympic values of courage, determination, inspiration and equality. It was extremely humbling.

At 2:30 a.m., I stepped off the shuttle at my exchange point, after being cheerfully reminded by our driver to savour the moment and more importantly have fun. I was busy reminding myself to focus on not dropping my torch or lighting myself on fire. (Because the damage that MS has done to my spinal cord I the lost of all the feeling in my hands 3 years ago. Holding or carrying something like the torch, which weighs just over 3 lbs. with the gas canister engaged takes an enormous amount of concentration.)

I stood on Granville Street, with my family and friends who’d come to share this moment with me. The street was quiet for a few minutes and then I saw one of my teammates, torch in hand, running towards me. As he stopped, we turned to face one another and I held my breath as the flame leapt from his torch to mine. Instantly, I was standing in a circle of light and I felt the intense heat of the flame on my face.

I’ll let you in on a little secret: what nobody knew was that inside my mitten was a photograph of my beloved grandfather, whom I’d lost in 2004 after he spent a lifetime of struggling with the effects of diabetes and strokes. Over the years, no matter how bad things got for him, he simply carried on with his life and not once did it occur to him to give up or to bow to his illness. He never knew of my diagnosis, but his life has served as a fine example of resilience, grace and courage and it seemed only fitting that in this symbolic way, he too should carry the flame.

I walked down Granville torch held high and turned on Smyth, waving back to onlookers as I passed. It was like walking in a beautiful dream, which for once didn’t include rain. Up ahead I could see Michelle, the next torchbearer waiting for me. I raised my torch and we watched as the flame leaped once again. We hugged and she was off. I had just enough time to pose for a few quick photos before the key was turned and the flame was extinguished. Just like that, I’d become a part of Paralympic and Canadian history and like all important moments in our lives, this one had flown by too quickly.

Having been so involved in so many aspects of the Games, I was struck by how committed the organizing committees of both the Olympics and Paralympics were to making the 2010 games inclusive. People with disabilities were highly visible during the games, not just as Paralympic athletes or performers at the ceremonies-they were also volunteers. John Furlong has spoken many times about the innumerable sacrifices Blue Jackets made in order to serve. For me, every day was a challenge. I’d just been through 5 months of chemotherapy in an effort to try and get my MS into remission and was in the process of recovering from that in the weeks leading up to the Olympics. I was struggling with a number of symptoms as the same time but I was determined to be well enough to serve.

In the month of February, I worked 14 hour days (that’s including the

commute) and had two days off during the entire month. Every night, I’d

pillow. It was utterly exhausting, but I loved every minute of it.

I could have attempted to make things a little easier on myself, by disclosing that I was dealing with serious health issues, but I chose not to and here’s why: I wanted to be the one to make the decisions about what I could and couldn’t do. I felt reasonably confident that I could take on whatever was thrown at me and find a way to make it work, after all, I live with the unpredictability of the effects of MS every single day and I’m nothing if not a creative problem solver.

I won’t try to tell you that there weren’t moments where I thought “What on earth have I gotten myself into?!?” but I had a dream that became a mission and I wasn’t going to let anything prevent me from seeing it through. When things got tough, I would stop and look around me. I’d be standing directly beneath the Olympic flag, in the middle of a group of athletes, or walking through a sea of red and white in Yaletown. I’d remind myself that I was in a time and place that I would never, ever be in again. The honour I felt being in that unique position would re-energise me.

The theme of the Paralympic Games was “One Inspires Many” and I think that as a country and as a province, we embraced that and set the bar really high with the example we’ve set for equality and inclusion. I was recently on the website for England’s 2012 Summer Games and I was really excited to see that they have been actively seeking volunteers with disabilities. A recent study conducted by UBC (The University of British Columbia) on the impact of the Olympic Games, found that Canadian Employers are 25% more likely to hire people with disabilities as a direct result of the favourable impressions of the 2010 Games.

I believe our challenge now is to continue that work with the same energy and enthusiasm we showed the world to create communities where opportunities to contribute in meaningful ways exist for everyone. It begins with one person taking up the torch and lighting the way.

I am in tears. xoxoxo

Oh Lelainia, that's gorgeous. It brought tears to my eyes as well. Your story is inspiring. Your writing is beautiful. Thank you so much for sharing. I wish I could have seen you give your speech.

Wow! Powerful You are! That is totally awe inspiring.