The Olympics; The Gift That Keeps On Giving!

Just over a week ago, I came across a post online, about a call CTV (Canada's national TV network) had put out, looking for people to share their Olympic experiences. As you know, from my previous post, I made a submission. What I did not tell you was that I got a call from a producer in Toronto (hi Tracy!) asking me if I would be willing to participate in the 90 minute, 1 year Olympic anniversary special. Would I?!? Who loves the Olympics more than I do? Of course I would!
After several phone calls and emails back and forth, I was scheduled to meet with a camera crew to shoot my clip on Monday. Monday, turned out to be a wash-literally. We had a record rainfall (practically a monsoon!) and the outdoor location we were planning to use was impossible. It would have been like Shamus O'Toole doing the Vancouver version of News from Away and surely, I would have needed a nor'easter! Tracy called me and saved me the trip in. We rescheduled for Wednesday.
So this afternoon, I headed downtown to Jack Poole Plaza to meet up with David and Jeff. When I was waiting on the platform for the skytrain to take me into the city, some Asian tourists came up, asking for help with directions. Clearly, the Blue Jacket has made an impression-it means something to people around the world. I'm kind of proud of that. 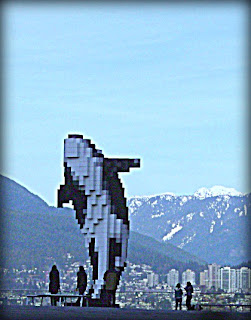 See how beautiful the day was? And yes, that is a "pixilated" orca, an art installation at the plaza with the beautiful North Shore mountains in the background. 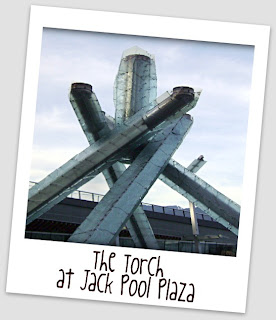 This is where the outdoor torch is. It's going to be relit on February 12th to celebrate the 1 year anniversary of the Games. One thing that cracks me up is that lots of people refer to it as "the cauldron". It's kind of odd because there's nothing bowl-like about it. It's a torch, formed in the same shape you make to start a campfire. But still, people call it a cauldron. 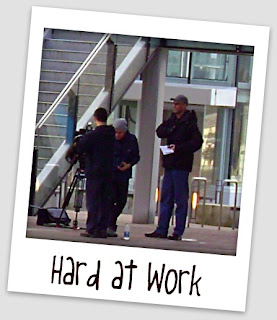 When I arrived, David and Jeff were just finishing another segment. We chatted for a few minutes about how the light had pretty much gone from this location. It's bordered on the land side by high rises, so as soon as the sun starts getting lower in the sky, shadows start to fall on the plaza. I mentioned what a shame it was that the weather had prevented us from shooting at the other location, which would have been spectacular. They thought about it for a moment and then asked if I had time for us to go there. I sure did! We hopped in their car and whizzed over to the other side of the city. 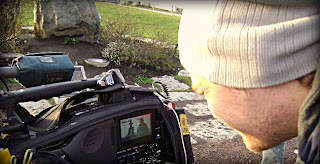 David looking at the raw footage
Where did we go? To the big Inushuk* on English Bay! There's a panoramic view of the ocean and mountains there which is why I was more than happy to make the trip if it meant I could have that as my backdrop. It's so beautiful and there was still plenty of light.
The only thing was, there was also a noisy bit of construction going on right bedside the monument. *rolls eyes* David set his camera up while Jeff scared the lone seagull off his perch on the inushuk's head. I got wired for sound and then we began shooting. Or tried to. Just as I began to speak, HOOOOOOOOOOOOOOOOOOONK!!! A dump truck decided to move on out and let the entire neighbourhood know it. There was nothing to do but laugh and wait it out. It seems that once you intend to film, you attract all manner of loud, random noises.
Once things settled down a bit, I got a few takes in, then it got noisy again and so we had to wait, again. David changed up the shot and we did a few more takes. He and Jeff were really lovely about it-they said they weren't satisfied till I was satisfied with what I'd done and they were both great cheerleaders. I have to say that shooting outside is alot harder than shooting in a studio. It's easier to concentrate on a quiet set, as opposed to being outdoors with city noise and people stopping and staring at you. I did my best and I hope Tracy's pleased. David and Jeff seemed happy with what we'd done. (YAY!) 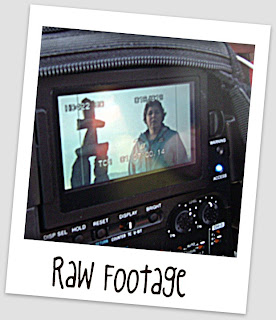 I got to have a sneak peek at the raw footage and I know it's going to be edited, so it will probably look alot different from how it looks now. Only 16 days till it airs! 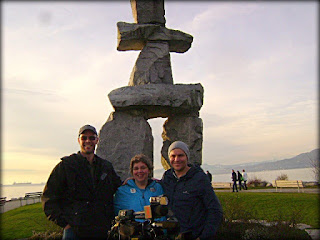 I had a really lovely time with these gentlemen. They were very kind to me and it was fun working with them. One of the best parts of being involved with the Olympics was the opportunity to meet all kinds of people. I've had some amazing experiences and this one rates right up there. I've far exceeded any hopes or expectations I ever held for what my Olympic dream was. I got the dream and then some and I'm deeply grateful and appreciative of that. They guys asked me about my experience and when I said it was the best time of my life, I meant it with all my heart.
So...if you're in Canada and you want to see the special, it airs on CTV on Sunday, February 13th. You'll need to check your local listings for the time. I'll be the one in the Blue Jacket (ha! that's a bit of an inside joke) standing on the beautiful west coast of Canada with the oceans and the mountains all around.
Thank you CTV and Tracy, David and Jeff for this amazing opportunity. I am honoured and humbled to be a part of it and I hope I've done you proud.

*Which oddly enough is actually an "Inunnguaq", if you were going to refer to it by it's correct name. I posted about this here after my visit to Canadian Northern House just before the Games.
at 8:03 pm

That is AWESOME!! bravo! I love that i can hear the joy in your voice when i read this post.

This such wonderful news! I am so proud of you and thrilled your Olympic adventure continues. You do the games proud! xxxoxox

YAY!!!! This so cool for you! How exciting and congratulations! I'm very proud of you and will be watching for you on the program.
Hugs, Carrie :)

How exciting is right! You got a cream come true!

this is such awesome news!!!
wish i lived there 'cause i'd be tuning in!
xo

That is awesome. Congrats my friend!

this is incredible!
i'm definitely going to try to catch it on the tele!

this is incredible!
i'm definitely going to try to catch it on the tele!

WOW! What a wonderful experience!

What a fantastic opportunity and, despite the hiccups, it looks like it was a lot of fun. Congratulations. And thanks for sharing it with us!