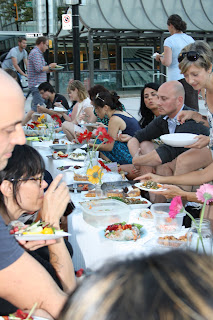 Last night was the second Alfresco dinner of summer 2011. The secret location was on Robson Street, in front of the Vancouver Art Gallery. They've closed that section of the street off for the summer, so it was a safe place to set up a rather large flash-mob style picnic. (100 people!) 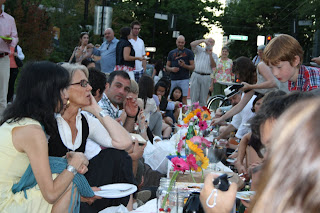 This was the first time they've set up on an actual street and it made things interesting. For one thing, this particular area is high traffic for tourist who seemed to think we were actually photo worthy. See all those people standing at the end of the table? Those are onlookers, not diners! Every now and again I would look up and they would be half a dozen people shooting photos or videos of us eating.
Lots of people stopped to ask us what was going on and a few wanted to know if dinner was free. (Um, no!) One homeless woman asked Colleen (the girl who made the crazy delicious bacon tarts last time) if she could have something and she gave her one of her bacon corn muffins. The homeless woman trundled off down the street munching happily away. 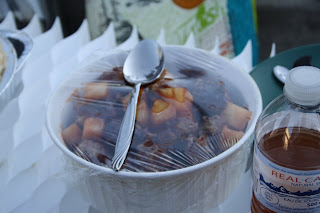 Since my marinated chicken was such a hit last time, I decided to stick to a meat dish and made sweet and sour meatballs. They were success-there wasn't anything left to take home and several people came up to tell me how good they were. Yay! I love cooking for people who love to eat! 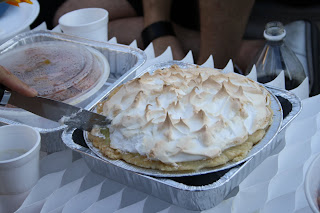 The girl sitting next to us made this lemon pie. My husband was delighted when she sat down next to us-lemon pie is his favourite! 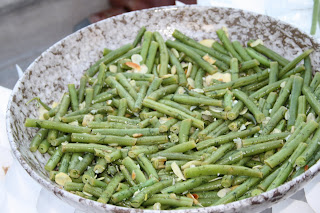 This green bean dish was my favourite of the night. It was nutty and garlicky and so delicious. Kelly, who had come for the first time made it. She's an interior designer and we had a long conversation about photography. I told her all about Wading In, Light Hunters and Swan Dive.
In the end, I asked her for the recipe and she gave it to me. We've got an insane amount of beans coming out of our garden right now and I want to make this to take to our neighbour's Eid celebration next weekend. (Eid is a Muslim holiday that follows Ramadan. It's the end of a period of fasting and prayer, when you have a big celebration meal. Our lovely neighbours invited us to join them again this year. We had such a good time last year.) 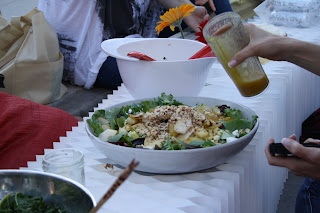 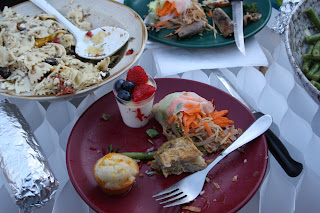 Some of what was on my plate. The shot glass had a yummy dessert that was some sort of cheese that was like a custard with berries and a reduction on top. MMM! The little muffin was orange liquor flavoured and so good. The thing wrapped in tinfoil was an ear of roasted corn.
I'm hoping there will be one more Alfresco before the weather turns. I think everyone who attended last night agrees. It's such a good time and a great way to meet new people. If you missed reading about the first one we went to, it's here. 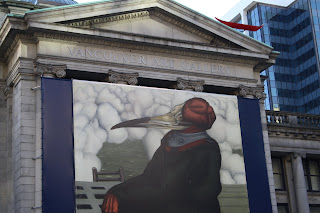 Just a couple more photos to share.There is a surrealism exhibit on at the Vancouver Art Gallery right now. I took a class in High School called Western Civilization. When I signed up for it, I thought it was going to be about culture, but it turned out to be about fine arts. It was like an art appreciation class on steroids. (Very dry subject matter and we had to do things like look at a painting and be able to say who did it, what style it represented, when it was created and so on.) This banner was up and I knew that I knew the artist. It's Edith Rimmington's The Oneiroscopist. Seeing it this big was pretty disconcerting!
As we were making our way to where Alfresco was set up, we were tripping over all sorts of filming equipment. Apparently they are filming Innocent with Bill Pullman inside the art gallery right now. We're pretty blase about this sort of thing because Vancouver is Hollywood North. We see this sort of thing all the time. My husband's aunt ran into Matt Damon in a local restaurant a couple weeks ago. That's par for the course around here. 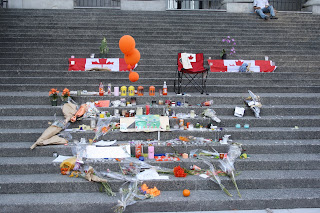 We also passed this tribute to much-loved NDP leader Jack Layton whose life was ended far too soon by cancer. I think we're still all in shock here. As someone said, "He was the best Prime Minister we never had." I think we all feel cheated that cancer stole his life just when he'd really got started. No matter what their political leanings, people genuinely liked him for who he was. He was a good man who loved his country deeply and will be missed. He will be laid to rest with a state funeral tomorrow.
at 7:41 am

And yes, whoever said "He was the best Prime Minister we never had" summed up Jack Layton's life beautifully. He will be missed.

This looks like so much fun!! And the food looks amazing! Wow...that little custard/fruit cup is beautiful...

My green beans didn't do well this year...at all. I'm not sure if it's because I planted them next to tomatoes and you're not supposed to? Or if it was just a bad year? Dunno...I'm just glad our local fruit stand grows delicious beans FOR me this year!