Papergirls Know How To Party! 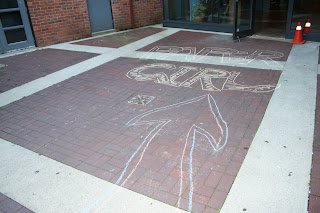 Last night was the Papergirls party and exhibit at the Roundhouse. I met up with Penn, (my art partner in crime) and we viewed the 500+ pieces of art that will be handed out for FREE at a secret location on Saturday. 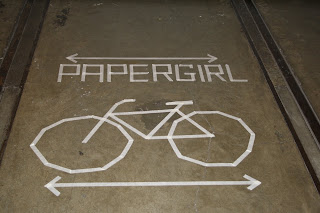 The Roundhouse is a gorgeous community building in the heart of Yaletown. I'd walked by it daily during the 2010 Olympics, on my way to the stadium. I was always in a rush during the Games, so last night was the first time I really got a chance to see inside it. It's beautiful facility, full of large spaces with huge windows that allow for lots of natural light. The architecture is wonderful.
In the gallery space last night, there was masking tape art and words on the floor. Such a cleaver idea! 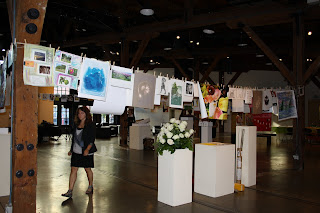 The art was displayed clothes line style throughout the space. 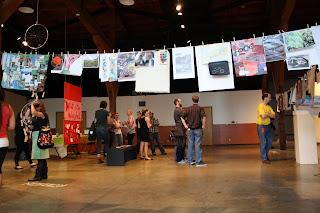 It was a good sized crowd and I liked that we had plenty of space to spread out in so that we could really see the art. 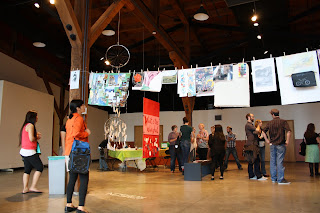 Organizers welcomed everyone and I'd been asked to say a few words. I made a short speech about how I'd come to be involved in the project and what I thought about it. I'd given some thought about what I wanted to say, but hadn't written anything down, so it was mainly off the top of my head. That was something new for me. I usually write everything down, but I wanted to try something new. Penn said it sounded good to her, so I'm chalking that up as a win.
There were so many cool and interesting piece of art. Here's a sampling of some of my personal favourites: 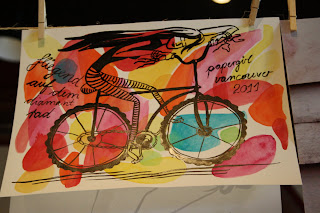 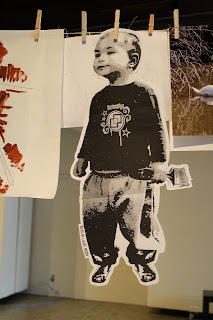 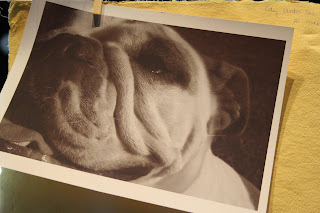 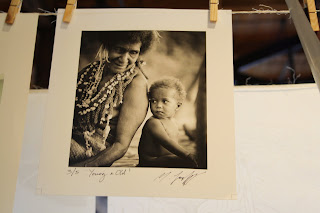 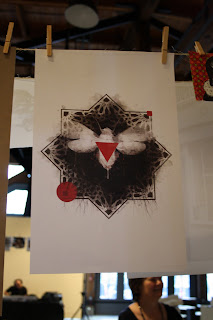 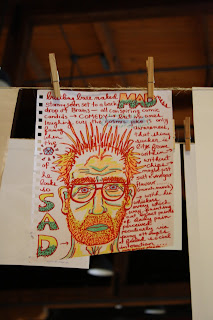 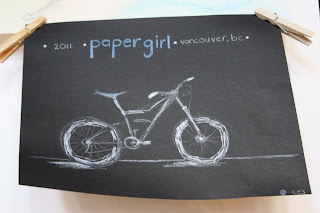 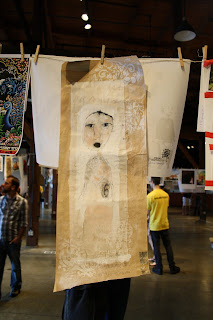 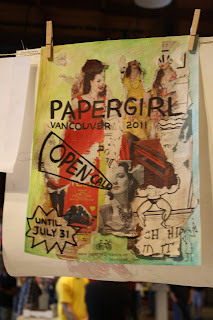 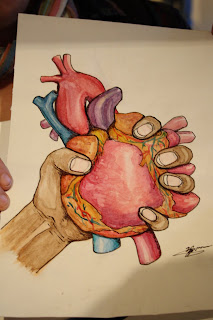 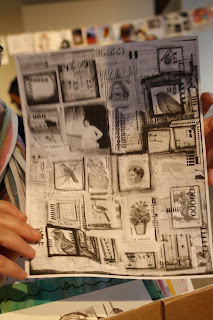 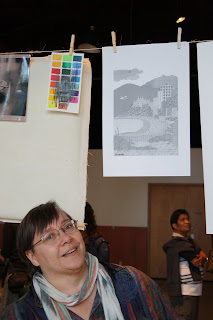 Here's Penn with the piece she created.
We had a really good time and met some fun and creative people. It always feels good to make new connections in the artistic community. It always makes me think of this piece of poetry by Rumi:
"There is a community of the spirit. Join it, and feel the delight of walking in the noisy street and being the noise."
Based on the success rate of the first ever Papergirls event, I think it's safe to say it will happen again. Penn and I are already thinking about what we'll do next year!
Thank you to the Papergirls organizers for bringing this event to Vancouver and to Roundhouse volunteers for helping to host it. I am feeling pretty chuffed that I can officially say I've had my art exhibited at the Roundhouse! (Which didn't really occur to me until someone pointed it out-I was more focused on the giving part and being excited to see what other artist had done. The exhibiting part was a bonus!)
If you're local and would like to see the exhibit, I believe it's open to the public until Friday and then Saturday, keep your eyes out-Papergirls will be delivering FREE art at a secret location in the city! Watch for girls on bikes handing out art! I'm hoping our paths cross while I am out doing City Chase!
at 8:30 am

I'm sorry I missed it last night! I'm going to get to it this week for sure...on my lunch hour sometime. The art looks wonderful!

Looks like a great event and so much amazing art! I love the idea of hanging clothesline style and that there was enough space to properly appreciate the work. And congrats to you for being able to speak off the top of your head...I have no doubt you were brilliant!

Thanks so much for coming to our opening and speaking and contributing your work! As part of the organizing teamand Roundhouse staff I was very touched by the words you shared with us and felt they slso must have touched on all hearts that were at the opening party! We look forward to seeing your contributions for next year :) oh and one of your favorites is the love of my life, so my favorite too! (the bully)