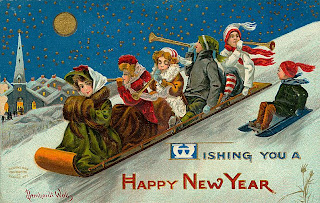 It's early on the final day of 2011. We're early birds in this house-my mother-in-law is often baffled when she calls us at 8 a.m. and no one's home. We probably do more before 9 a.m. than most people do all day!

Today we're heading off for a hike in the wilds. Where we're going is on a lake, so at some point, Indy will be able to take a dip. He swims all year round-it's what Labs do. (And it makes him crazy-happy.) We're packing a lunch so at some point we'll have a winter picnic and of course, I'll have my camera in hand-I can't pass up the opportunity to capture the fleeting moments of this year now, can I?

Tonight will be spent quietly at home. We're going to order Chinese take out from our favourite place (Hon's) and watch the year-end comedy specials. The ones I watch are political in nature. It's a long held tradition that I end the year laughing as they skewer politicians.

Tonight's special not only because it hails the arrival of a new year, but also because it marks the 22nd anniversary of our first date. Twenty two years ago tonight, my husband showed up at my door with two tickets to a Philly vs. Canuck's game. (He's a huge Philly fan.) It was the beginning of our happily ever after.

I want to wish you all a Happy New Year!! Bonne Année!!
May 2012 be all kinds of wonderful!

P.S. Tomorrow I'll be posting my year-end photo project, so do stop by and check it out!
at 6:49 am

A happy, healthy and creative new year to you! I hope 2012 brings you everything that you want and even more!

Happy New Year to you and the family! I look forward to photowalks in 2012. Yahoo!