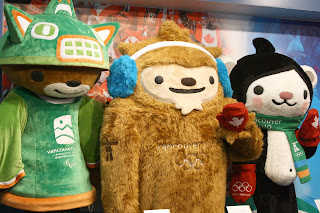 Today marks 2 year since the 2010 Olympics kicked off. It's hard to believe that much time has passed-in many ways it seems like it was just yesterday. This time last year, my teammate, Sharon and I, along with some of the other members of our athletes' marshalls team were trooping around downtown at the 1 year anniversary celebrations. It was a cold and rainy day a year ago. I am so glad that was not the case today! 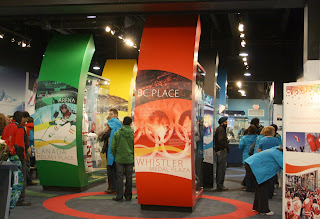 This morning, the BC Sports Hall of Fame welcomed the Blue Jackets to their brand new 2010 Gallery. It's beautiful-as bright and colourful as the games themselves were and chock full of fantastic artifacts. 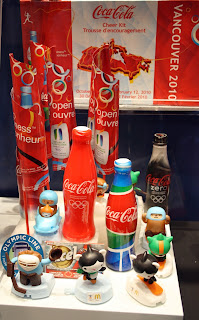 It was fun to see the souvenirs they had as well and to see how many of them I collected as keepsakes for myself. These were the Coke bottles and flags from the Olympic Torch Relay. The relay went right past the end of my street at one point and they were handing out the flags and bottles of Coke to everyone who came out to watch. I have 2 different bottles sitting on my dresser and the flag is here in my studio.

The little figures were from McD's, another sponsor of the Games. I think I have the blue bobsleigh on the top left stashed somewhere. I have the packets of Excel gum saved as well-I sewed them into my 2010 ROD journal. (Which you can see here and here.) 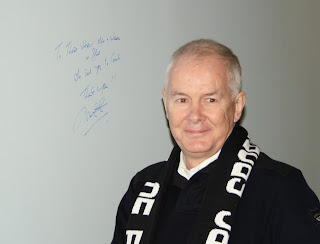 The BC Sports Hall of Fame arranged to have a special wall set up for VANOC CEO John Furlong and the Blue Jackets to sign. I think it will become part of the gallery after this weekend. 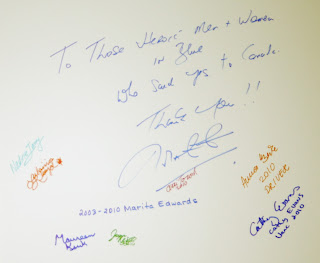 (I signed in red on the lower left.) 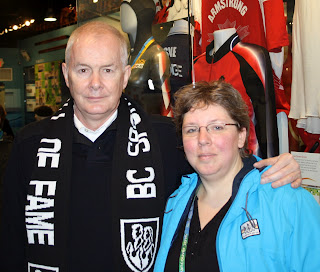 Mr. Furlong was kind enough to pose for a photo with me, after he presented his own Blue Jacket ﻿to the BC Sports Hall of Fame. Soon it will join all the other uniforms that they have on display.

They did a fabulous job of gathering a wide variety of items-everything from torches, to Games time uniforms, to uniforms from some of the athletes from other countries, to a huge collections of pins, to medals and so on. I took a ton of photos, but I really want to encourage you to visit if and when you can. It's really worth seeing up close and personal.

Here's a little video footage of the celebration:


THANK YOU
BC Sports Hall of Fame for hosting us!

While I was there, I met Nadine who worked for VANOC. She very kindly helped me get some photos of myself at the Sports Hall. I usually shoot self portraits, but it's nice to let someone else take the photos sometimes! I had fun hanging out with her and swapping our 2010 stories.

While we were talking, I was reminded that there is another anniversary this weekend. Two years ago, Gorgian luger Nodar Kumaritashvili lost his life in a terrible accident on the track up at Whistler. It seems only right to mention it here and to take a moment to think of his family and to remember their loss. He was gone far too soon.
at 4:53 pm

So glad you could come for our Red Mitten Weekend celebrations. Please let other Blue Jackets know they can still sign the Blue Jacket Legacy wall until February 28 - they still all receive 1/2 price admission. So pleased you like the new Vancouver 2010 Gallery - we are very proud of the final display.