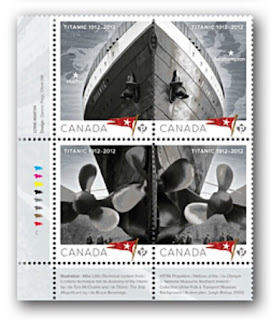 Since I was a little girl, I've been fascinated by the story of the Titanic. I've read just about every book I could get my hands on. In honour of the 100th Anniversary of the sinking of the Titanic, I'm doing a giveaway for this beautiful pane of Canadian commemorative stamps.

Here's an explanation of the artwork, which was done by Mike Little who resides in Halifax, by way of England:

"Each corner block contains 2 stamps showing RMS Titanic's bow and 2 featuring the stern. The detailed illustrations were based on existing photographs and are intended to be as realistic as possible.
The Bow: Titanic's enormous bow and two front anchors appear in the centre of the first pair of stamps.  On the right side, you'll see Southampton, England, where the Titanic began her maiden voyage. On the left is Halifax, Nova Scotia, Canada, which became the centre of recovery efforts after the ship sank.
The Stern: The second stamp pair shows the 3 propellers that were situated at the rear of the ship—2 larger outer propellers and a smaller centre propeller. Again, the stamp pair separates into 2 for mailing.
At the bottom of each stamp sits the House Flag of the White Star Line (Titanic's owners). This iconic red flag flew from Titanic's main mast and was also displayed on her tickets, cutlery and furniture."
***
To enter the draw, leave me a comment telling me where you're from and one thing you find interesting about the Titanic story.
You can Tweet a link to this post or share it on Facebook for an extra entry. (Just let me know you did so in your comments!)
The winner will be drawn on Thursday, April 19th. Please be sure I have your email in case you win-if there's no way to contact you, I'll have to draw another name!  Good luck!

I'm from a lovely little dairy farm in Maple Ridge. The many speculations regarding the cause of the sinking of the Titanic is fascinating to me. I've been watching every single National Geographic TV program this week. There are a lot of theories. And yet, as in when I would read my son's aviation textbook accident reports, it was never only one cause, there would be a series of contributing factors, that when coming all together, result in the final disaster. Do you think that in 100 years they will still be talking about the Costa Concordia? Helen Laity

I'm from up the street from you! Hey! LOLS! And I'm not so much into the Titanic, other than that was a bad-ass band that carried on playing as the boat sank. But I do love stamps. This is amazing.

Beautiful stamps! I wonder why the US hasn't come out with any. Thanks for sharing!

Hi, I am Elaine from Georgia, in the southern US. These are great looking stamps. My fascination is that is was supposed to be the greatest luxery liner of the day, and unsinkable. I enjoy reading the personal accounts of the events. Their stories touch my heart so much. Especially the band playing on, even though they knew they were going down with the ship. So many heroic acts were done during that disaster and most people don't know of them.