So right after I finished my leg of the relay, we jumped into the car to race up Thermal Drive and find a place to park before the hill was shut down for the relay. 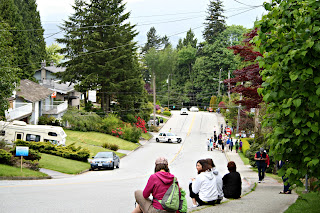 We parked about two blocks down from the place where the relay would be stopping briefly at the summit. I wish there was a photo that could accurately translate how punishing a hill Thermal is. It's 1.6 km long, with winding switchbacks. When I drive up it, my foot is to the floor and the car is wondering if I'm serious.

When Rick initially faced this hill 25 years ago during the Man in Motion World Tour, the route planner had made a huge mistake. They'd mapped out Rick's route, simply by marking off what looked like the quickest way from point A to point B. They almost cancelled when they realized the error, but Rick decided there was no better way to illustrate overcoming adversity. With that, history was made. 20 years later, Rick tackled Thermal Drive a second time, beating that hill handily. 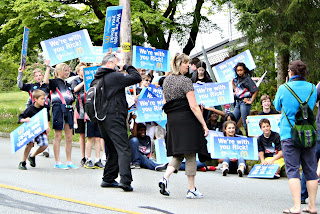 For this section of the relay, there were medal bearers from several local schools doing a portion of the climb. 1600 students turned out to support their DIfference Makers and to cheer Rick up the hill. All the kids had signs that said "We're With you Rick!" I have one of those signs sitting here in my studio now. 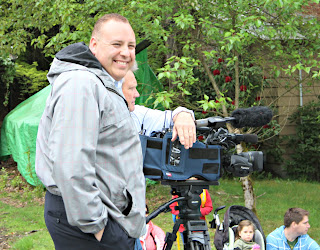 Our local news anchor Steve Darling from Global showed up. We just happened to be standing where the news wanted to set up their cameras to catch the event. I had a nice little chat with Steve while we waited. I also ran into Kelly, an Olympic swimmer whom I'd met during the 2010 Olympics. She worked for VANOC and was involved with overseeing all the Blue Jackets at the Stadium during the Games. She's now working with the Rick Hansen Foundation for the relay. 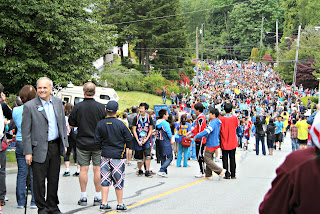 Coquitlam Mayor Richard Stewart (that's him on the left in the grey blazer) also arrived and watched from our vantage point. See the sea of humanity winding up the hill? Rick and the medal bearers are in there somewhere! 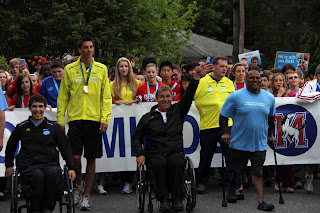 There he is, along with medal bearers and endurance athletes! 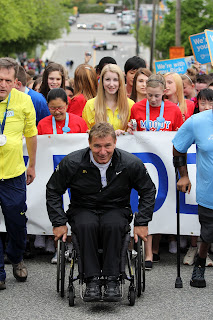 Coming up the hill! 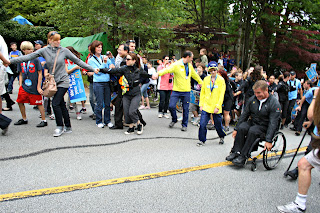 Finally the tide of people reached us. It's so steep, Rick was moving very slowly, but with incredible force to make his ascent. You can see the relay team with their hands linked in an effort to give him space to wheel, so he doesn't lose his momentum. As the crowd reached us, we were swept up the hill with them. 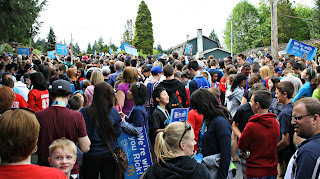 Here we are at the summit, where a stage was set up so Rick and a few local politicians could say a few remarks. I couldn't see the stage at this point, but I could hear what was said over the loud speakers. 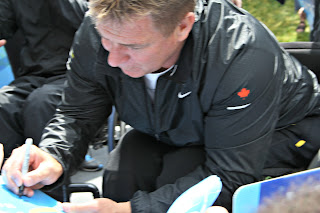 Afterwards, Rick graciously signed autographs. Most of the kids were having him autograph the signs they'd been holding. I don't know how I managed to get so close, but suddenly I was right in front of him, so I took off my personal medal and asked him to sign the ribbon, which he did. He then looked me right in the eye and thanked me for being in the relay and for the important work I was doing. WOW! 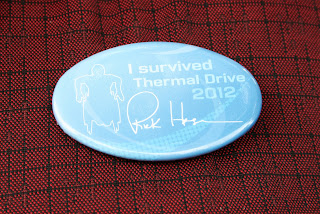 They were giving out these pins, which I thought were great. It was amazing how everyone made that journey up the hill with Rick-it really illustrated the idea of "many in motion" like nothing else could. After driving up and down Thermal for years, thinking of him every single time, it was really quite moving to witness him wheeling up it in person. He managed to reach the top in just 30 minutes. Incredible! The legend of Rick Hansen deepens.

Things wrapped up at the summit, so we hopped back into the car and took a short break to go out to a family lunch to celebrate.

I've read and re-read this whole series about the relay, but the photo with all the people walking behind Rick Hansen is my absolute favourite. So many people! So much support! It's glorious. And I adore the photo of you and Rick. You are the best schmoozer I know. :-) And mean that in a good way.