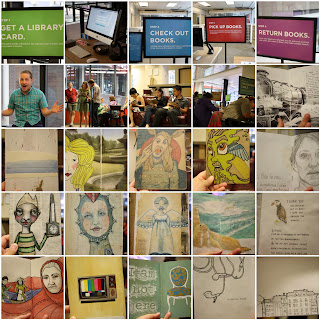 Tuesday afternoon, I headed downtown to the W2 Media Cafe to meet up with friends Penelope and Carol at the Sketchbook Project's Vancouver debut. Being the keeners that Penn and I are, we arrived just before the library opened at 3 pm. Carol manage to squeak in under the wire at the end of her work day.

They had a really efficient set up, as you can see in the first 4 images above with great signage to explain what to do. You begin by using the DIY kiosk to issue yourself a library card and then move to the check out station where you can search for the books you'd like to view. You can generate a search based on name, location, title, medium, materials, theme and about 50 more criteria or you can simply request the computer randomly choose for you. If you do a search, you get the book you requested, plus another which is randomly chosen-two for the price of one! This is the project's way of giving everyone equal shelf time, which is great.

When a book is viewed, the author is immediately sent an email saying "Your book was viewed by (name) in (city)." I've had emails like this from the tour stop in Chicago. When I got home from Tuesday's event, I had emails from the project saying who had viewed my book in Vancouver. It's so fast that I viewed a beautiful book about the ocean, done in watercolours by Kimi Kobashi , 10 minutes later, she was following me on my page on the Sketchbook Project site! Amazing!

I knew several friends had signed up for the 2012 Sketchbook Project, so I began my time there, searching for their books. I was able to find Angela Cartwright's sketchbook and in looking for another O'Brien, came across Karen O'Brien's instead. (I've met her through Artfest.) I also check out Mat Roff's contribution. Mat was the first person on the Sketchbook Project site to "friend" me when I joined. His work is so cool!

Another great thing is that it was a great place to meet other creatives. I met some new people and had lovely chats with them and ran into old friends as well. I was surprised to see a friend from the Bellingham ATC group, Cheryl, whom I haven't seen for years, as well as another friend I met through the Al Fresco dinners, Colleen (of the famed bacon tarts!) and Mary whom I recently met through my work with Papergirl. It was THE place to be on Tuesday!

The folks from the Arthouse Co-op were super nice and friendly. That's Chris in the photo in the second row on the far left. I kept him busy running back and forth to the shelves getting me books. In all, they brought a library of 7000 books on tour. I believe I managed to look at about 50 in 4 hours. Over the two day show, they issued 265 library cards and 2588 books were viewed!

While we were there, Penn and I also took the opportunity to sign up for the 2013 Sketchbook Project. If you sign up at the tour, then you save $5 on shipping and get your blank sketchbook right there and then. Seemed like an excellent idea! Now I just have to get busy working on it-I have 7 1/2 months to get it done!

If you want to know if the tour is coming to your neck of the woods, here's the place to find out! Anyone living in Toronto will have a chance to visit the tour when it's in town July 18th-22nd. GO! You won't be sorry!
at 5:33 am

Saw this in Brooklyn last year. The whole "Library" concept is amazing and as you said, they have it down to a perfect science. Such a fun event to visit.

It was a fabulous evening looking at sketchbooks ... met great local folks and serendipitously discovered more than a few inspiring sketchbooks ... all of whom I noted in my journal so I could add them to my "reading list" on the Art Co-op website. Oh how I love the people who choose to have their sketchbooks digitized so I can enjoy them again and again (and so can people who don't live near where the "tour" is traveling!). So glad I participated and I'm now filled to the brim with ideas for the 2013 sketchbook - wish me luck!

Thanks for taking a look at my book and for the shout-out here in your blog post. Nice to read your summary of the event ~ how amazing I was notified so rapidly that you had my book! I'll be looking for yours in Oakland... it's great to meet you via art! :)