Yesterday, as I was watching the morning news, they mentioned that they were having an event to send off the Canadian Athletes from British Columbia at the Athletes' Village in Vancouver. I decided to drop everything and go! 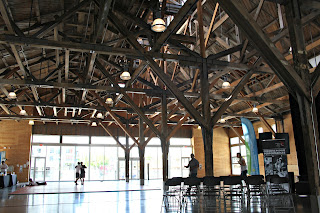 This is where the ceremony took place, in the Salt Building at the Athletes' Village. It's a gorgeous old building that was restored for the Games and served as the "living room" for the athletes during the Games. Since then, it's hosted Games related events. I think it's really nice that it's being used in this way. It seems fitting.

Here's members of the Paralympic Rugby team wheeling in. 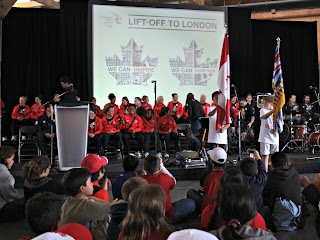 It was a sea of red, both on stage and in the audience. The Olympics begin in 32 days so we've begun to fly our colours! 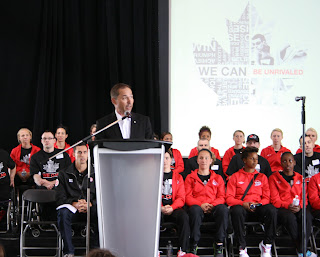 This was the master of ceremonies, a Chef de Mission, but I can't remember his name. (Sorry! I tried looking it up, but no luck.) He addressed us in both French & English. This is the Olympic (and Canadian) way.

He introduced the BC athletes present, which included members of the women's soccer team (Including beloved #12, Christine Sinclair), Swimmers and Paralympic Rugby.

Interesting fact: BC represents only 1/3 of Canada's population, but if our Canadian Athletes win in London, will be responsible for 50% of the medals. WOW! I'm not entirely surprised-British Columbians are outdoors people and tend to be very active. How could you not be in a place as beautiful as this? 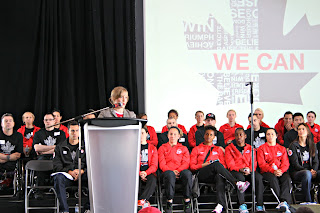 Four time Paralympian, Elisabeth Walker-Young, the Assistant Chef de Mission for the Paralympic Games spoke as well. She commented on the fact that she was glad the Olympians and Paralympians were being honoured together. I agree. It was wonderful to have all our athletes share in this moment together. 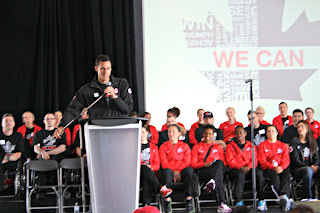 Olympic swimmer, Scott Dickens gave a very moving speech explaining how tough the road to the Games can be. He missed qualifying in 2008 and had to refocus on why he loved the sport in order to keep working hard to qualify for London 2012. He also talked about how as Canadians, we are reluctant to say we want to win (because humility is so much a part of our national identity) but that he's changed his mind set to "Why not ME?" He's right-somebody has to win and why not him?

The whole ceremony was quite moving and several times, my eyes were full of tears. I love the Games and I am so proud of our athletes. 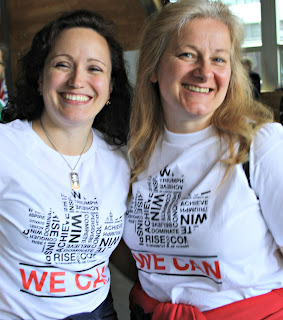 I ran into these two ladies, whom I've volunteered with at other big city events. Apparently, they were volunteering at this one. No idea how I missed the notice-I would have volunteered in a heartbeat. Love the shirts! 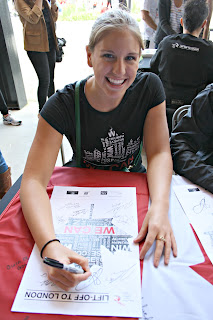 Afterwards, they handed out these posters so you could get them signed, so I did. It was fun to personally wish each of our athletes the best of luck in London. 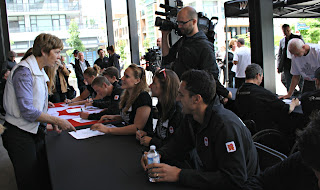 There were cameras everywhere! 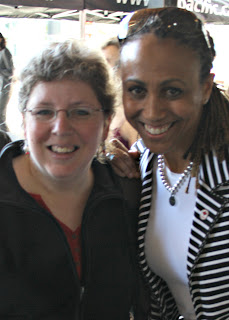 Just before I left, I spotted 5 time Olympian and silver medalist, Charmaine Crooks. On impulse, I said hello and asked if I could have a photo with her. She was very nice about it. It's kind of surreal bumping into her like that, after seeing her for years on television. She's represented Canada for over 20 years in athletics. She's a very big deal in the world of sport and Olympics.

Afterwards, I walked over to Terra Bread (in the village) and had lunch alfresco. It was such a beautiful sunny day, which was wonderful, after how dismal and cold the weekend was.

I'm really glad I went. My excitement for London is building! Safe journey and good luck/bonne chance to all our athletes! I am SURE they are going to be able to hear me cheering across the pond. I BELIEVE!

Thanks so much for sharing this! I got a little teared up reading your post and seeing the pics. (I got teary when the Torch relay went through my city, and we got up super-early to go watch.) We've been making snarky comments over here about the Jubilympics, and the commercialism did not help any, but the Torchbearers themselves really did and do inspire me. As do the Olympics, deep down underneath all the schwag. :)

(Now, who do I root for -- Americans, Canadians, or Scots playing for GBR?? LOL.)

Thanks again for sharing this. :)

What a great event!! It only show...one has to follow their heart and go!! (I need to do this more often myself!!)