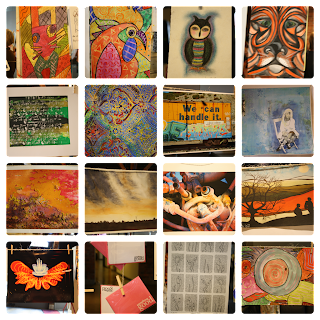 So Tuesday night was the opening of the Papergirl Vancouver exhibit. I got to the Roundhouse at 5:30 pm and was immediately busy in the kitchen prepping food for the reception. I did manage to snap a few photos though. 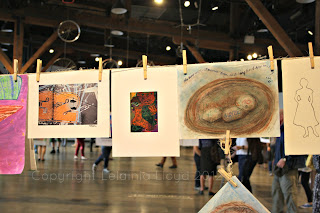 Everything was hung on a line, like last year. This year there were over 700 piece of art donated and 136 contributing artists, so space was at a premium. It was nice to see the venue filled right up with art. 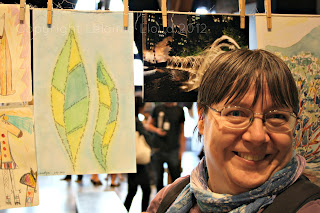 Here's Penn with one of her pieces. 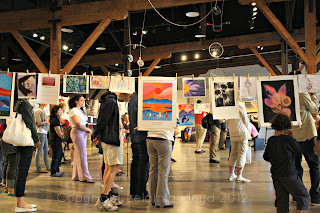 The turn out was really good. I think there were at least double, if not more the amount of people who attended last year. It was great having so many people turn up for the opening. 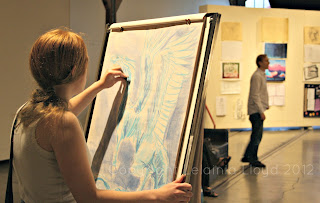 Easels were set up for people to make art if they felt like it. This girl spent a fair bit of time working on a dragon.

It was a pretty busy night and I wasn't feeling very good, (understatement of the year) so the whole thing was a bit of a blur to me. 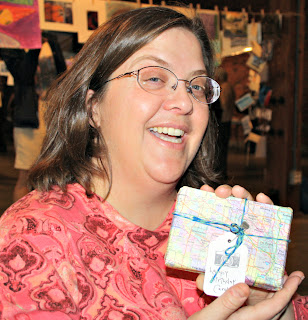 Here's my pal Carol with that secret package I posted the other day. She was pretty surprised when I handed it to her. I'll show you tomorrow what was inside!

Tonight I am going to an Al Fresco dinner with my husband. It's the first one of 2012 and the location is a good one. We always have a wonderful time and it will be nice to catch up with people we've gotten to know through these dinners. The diversity of people who attend is always interesting.

Tomorrow the Olympic opening ceremonies happen! WOOHOO! I've already been watching the Canadian Women's Soccer, which has been wonderful, even though we lost to Japan, 2-1. Our ladies played a pretty defensive game and made some great saves. Kudos to Melissa Tancredi for scoring the first goal of Olympic competition! I hollered and I am sure they heard me in London!

Saturday, my holidays begin! I can't wait! I think I've definitely earned a break.
at 7:31 am