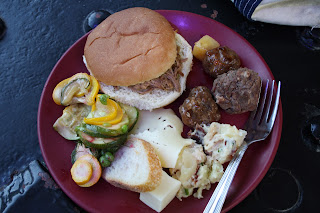 So I'm on vacation and it feels like things are just as busy as they were when I wasn't. Not complaining-just an observation. Thursday, we attended the second Al Fresco dinner of 2012. I had my first taste of elk. 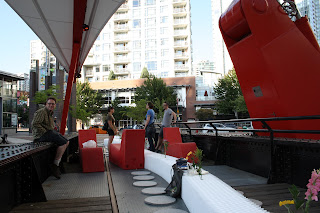 The secret location this time around was at the Roundhouse. There's this big metal structure (I think it's supposed to be art) in the courtyard area and we sat right underneath it. It was a really nice evening. 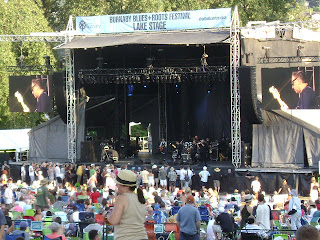 Saturday, through a stroke of luck, I got a free ticket to the Burnaby Blues & Roots Festival out on Deer Lake. I arrived around 4:30 pm and it was smokin' hot out. Really, too hot for me, but I had a good reason to be there. 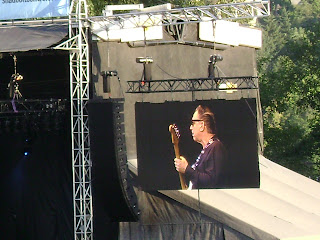 Jimmie Vaughn, brother of Stevie Ray Vaughn played. He's really every bit as good as his brother. At one point, he played an entire song with his guitar behind his head, backwards. Crazy! 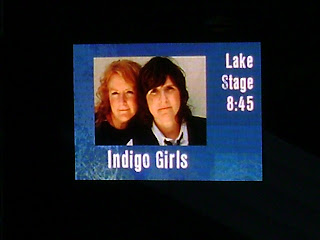 THIS was the real reason I went though. I adore the Indigo Girls and though I've been a fan for years, I've never seen them in concert! 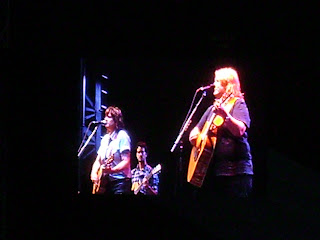 They are so incredibly talented and gave a great concert. Every time they finished a set, we'd clap and they'd say "Thanks Y'all!" So charming! When they play here again, I am most certainly getting tickets. They're touring the US soon, playing with local symphonies in several cities. I imagine that's going to be fantastic. I wish they were coming here.

Sadly, the Olympics are over. I watched hours and hours of events while it was on. I didn't manage to make it through the closing ceremony though. That was ridiculously long. I fell asleep during the part with Russell Brand. They re-aired it in the evening, so I picked up where I'd left off, but by the time 7 pm rolled around, it wasn't even close to being done and Breaking Bad was coming on, so I gave up. I think any ceremony longer than 3 hours is too long.

Now there's the 2 week changeover for the Paralympics. The opening ceremony is on the 29th. I am hoping we get good coverage, but if not, the Paralympic website will be live streaming events. I plan to watch as much as I can and cheer for team Canada!

Oh and one more thing before I sign off-I haven't forgotten about the giveaway. I'll be contacting the winner later today!

Keep on enjoying the vacation. It looks and sounds like fun!

It looks and sounds like you had a great time...even in the heat! As a Stevie Ray Vaughn fan myself, I would have like to have heard his brother. I'll have to keep my eyes open to see if he's ever in my neck of the woods!