On Friday, I discovered that the Dr. Sun Yat-Sen Garden was hosting Tibetan monks who were going to be creating a sand mandala. I've always wanted to see this, so I quickly emailed my friend Carol to see if she wanted to come with me. She did, so yesterday, we braved the weather (it was pouring and windy) and went to meet them.

When we arrived, we discovered that the monks had not yet arrived. The docent explained that they were on "Tibetan time", which made me laugh. You cannot expect those that live in the now to be the slave of a schedule. She needn't have worried though-they arrived right after she'd said it, smiling and in good spirits despite the dismal weather. 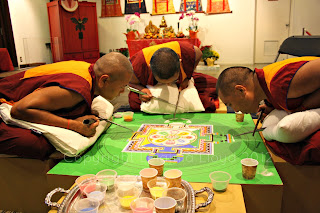 They'd begun working on the sand mandala the day before so we were able to see the amazing progress they had already made. The mandala is drawn from memory and then they begin the painstaking work of filling it in using colourful sands. 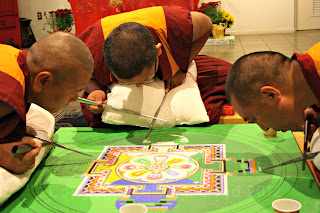 They have two tapering medal rods that are ribbed. The top end of the rod is wide and open and they scoop the sand into the rod from this end. The other end is narrow and this is where the sand comes out. They rub the second rod up and down the one full of sand, to create vibration to make the sand come out. It's like a sand version of paint by numbers. 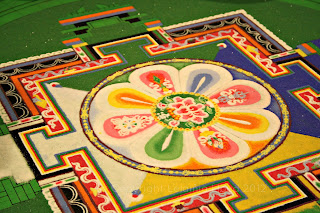 They create intricate patterns and outlines, using the different colours and though it's hard to tell from the photos, there are also a variety of textures created. It's really incredible the amount of skill and patience required to do this. The knowledge of this art has been handed down through the ages.

Each element of the design has meaning. Mandalas are symmetric with a series of concentric circles and square. The center point is where the deity resides. The finished mandalas have four gates, which symbolize the four virtues: compassion, kindness, sympathy and equanimity. Sand mandalas are for purification and healing and the act of their creation is a form of meditation. Once completed, the mandala will be consecrated and then ceremoniously wiped away and dispersed into flowing water, symbolizing the impermanent nature of existence. 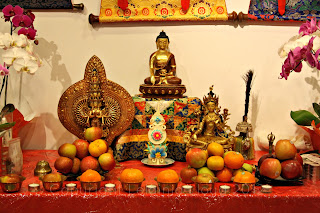 Before they began their work the day before, they also held a puja ceremony, honouring Buddha. Offerings were made and incense was burned. Usually I am not a fan of incense because I have allergies but the incense they used was really lovely. It didn't bother me at all. 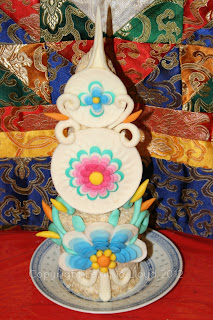 The Abbot, Jampa Sopa created this butter sculpture. Butter sculptures are a made from a mixture of Yak butter, wax and dyes. When you're working with it, you have to dip your fingers in cold water to keep it from sticking to you. Butter sculptures are given as offerings. This one stood about a foot high, but for special ceremonies, they can reach several meters high. Again, each of the colours and designs holds special meaning.

I was able to shoot a short video of the monks working on the mandala. I wanted to be able to share with you the sound of what they were doing. It was oddly mesmerizing. Carol and I found that we lost all track of time watching them work.

During the Chinese Cultural Revolution, (1950-1959) the monk's monastery was razed to the ground. Of the 600 monks of the Dzongkar Choede monastery, only 5% survived, fleeing to Southern India with the Dalai Lama. Today they are a community of 300 monk and run a school for young monks, many of whom are orphans or semi-orphans from poor families. The monks have come to Canada to raise funds to support their school and to provide health care. I believe everyone should have access to an education and health care. It felt good making a donation to support this.

It was an amazing opportunity to be able to experience Tibetan culture right in my own back yard. I have read about the struggle of the Tibetan people for years. 7 Years in Tibet is my all time favourite movie. I never dreamed that someday, I would be sitting in a scholar's garden in the heart of Vancouver, watching ancient history and tradition unfold before me. The world seems a little bit smaller now and certainly more beautiful. Yesterday was magical and mystical and I'll never forget it.

To see what Carol had to say about our experience, click here. Her photos are fantastic.
at 7:41 am

Viv@Thoughts from the Desktop said...

Wow the patience and love that goes in to such intricate designs what a treat to see it up close....

Yay! The video turned out great! I love that sound. Yesterday was super dreamy. I loved it! Thanks for letting me know they were here. I would have completely missed them otherwise.

Oh Lelainia, this is amazing. Thanks so much for sharing the video! I love it.

This is exquisite. So much patience and care to create a thing of impermanent beauty. You must have been very glad to have been able to witness it in the creation.