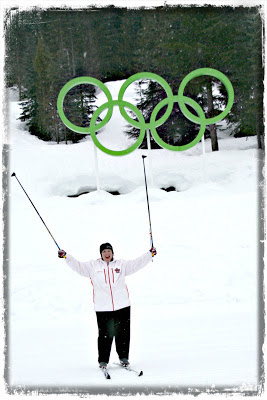 Saturday, I spent the entire day at Whistler Olympic Park, which was home to the Olympic and Paralympic Cross Country Skiing and Biathalon events. My friend Andrea asked me to come and be the photographer for the Skiing is Believing program and I jumped at the chance. I adore Whistler and I was more than happy to support the important work she and Paralympian Courtney Knight are doing.

The Skiing Is Believing program introduces people with disability to cross country skiing. Paralympians, their coaches and team of dedicated volunteers teach people with a variety of physical and sensory disabilities, (wheelchair users, amputees, people who are blind or visually impaired, people with cerebral palsy) as well as their friends and family to ski.

(That was Andrea talking about the program!) 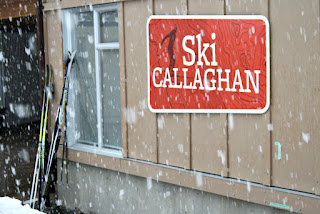 I spent the morning capturing various aspects of the program. It was a bit of a challenge because the weather was absolutely not cooperating-we had a combination of rain, rain mixed with slushy snow and then outright snow. I'd planned ahead though and brought an umbrella, as well as a Ziploc bag, some duct tape and scissors so I could McGyver a way to keep my camera dry. It was a good thing I did because by the end of the day, pretty much everything I owned was soaked. It pays to be prepared! 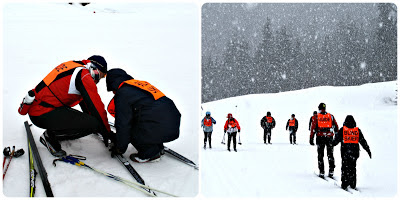 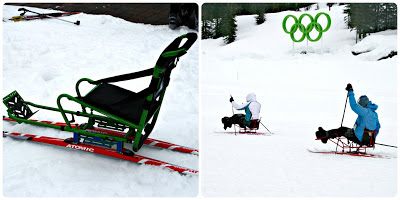 No one seemed to mind the less than ideal weather conditions-they geared up and got out there. What I really enjoyed was the opportunity to observe and learn. The coaches and volunteer guides were incredible. In no time they had their skiers geared up and ready to go. Everyone was assigned a volunteer so they had one-on-one support and instruction for the day. It was wonderful to see someone go from being tentative as they were learning, to gaining confidence as the day wore on. The transformation was amazing to witness.

Late in the morning, I went inside to warm up and see what I had shot so far. While I was sitting there, a skier and guide came in. The guide got her skier situated and then left to grab some lunch. We were the only two people in the room, so we chatted with one another, sharing our stories. It turns out I was familiar with her story because it had been in the news. We had a long conversation about processing and coping with difficult things and how we move forward in our lives. It was one of those moments when I realized the universe had conspired to put us in each other's path for a reason. That conversation was meant to happen. Her courage in the face of terrible adversity is remarkable. I am continually in awe of the resiliency of the human spirit.

After lunch, while everyone who'd spent the morning in lessons went off to ski the trails, I geared up and Andrea gave me my own lesson. I cross country skied as a kid, but that was some time ago and long before damage to my spinal cord made me to lose my proprioception. (The ability to know where your body is in space, which is absolutely necessary for balance.) I was very scared, but I was also determined to ski. I never allow fear to keep me from doing anything.

Andrea was super supportive and patient while I got used to moving on the skis. Even though we were working in what appeared to be a fairly flat area, there were still times when the skis would pick up speed on slight inclines and I would struggle to stay on my feet. Andrea told me to crouch down and put my hands on my knees to maintain balance. Most of the time that worked, but I fell a few times. I slipped and fell backwards once and whacked the back of my head, but I was okay though I think I might have scared Andrea. We got my feet out of the bindings and in less than a minute, I was up and laughing and went right back at it. It never occurred to me to give up.

I figured out that as long as I could keep my center of gravity over the tops of my boots, I wouldn't fall down. I found skiing uphill much easier than downhill. When I was going uphill, my balance was in the exact right place and I felt like I had control over my skis. It was much harder going downhill, but I attempted skiing down an incline (across and down a bridge) just to have the experience. (I'll try anything once!)

I got about 3/4's of the way down the bridge before I
wiped out. *laughs* I knew falling would be part of the deal and I was okay with that. It's part of the learning process. The best way to describe what being on skis felt like for me is to liken it to when you see someone in the circus balancing on a piece of 2x4 , which is balanced on top of a ball. It took every ounce of my concentration to stay on my feet.

At one point, we were skiing in front of the Olympic rings and Andrea asked me if I realized I was skiing where the Olympic and Paralympic XC skiers had all crossed the finish line. I hadn't till she said it and I loved her for pointing that out to me. She knows how much I adore the Games. She took the photo of me standing in front of the rings at the top of this post. I felt the way I look in that picture-happy and grateful for the experience and personally triumphant that with Andrea's help, I DID IT.

Skiing Is Believing beautifully illustrated for me how important Para sport programs are. It gives those who live with disability the opportunity to reclaim their physicality, to redefine what they believe is possible for themselves, to connect with others and if they so desire, to train to become competitive.

My experience on Saturday reaffirmed for me that anything is possible and that when life offers you an opportunity, you have to grab it with both hands.
at 12:04 pm