So if you wondered where I'd disappeared to, I've been at the Federation of Canadian Municipalities (FCM) Conference volunteering for the last four days. It's an annual conference where leaders from municipalities from across Canada gather to network and learn from one another. I was serving as an Operations Assistant, which meant I was helping facilitate the organization, loading and dispatch of a fleet of buses that were used for study and companion tours. There were 2600 delegates at the conference so this was a big and challenging job, but something I love doing. I've done VIP transportation dispatch for several of the big city events in the past (World Police & Fire Games, 99th Grey Cup Festival and CONCACAF Women's Olympic Soccer Qualifier) so my skills were put to good use. I got to work with a great team, so that made the job fun. I was really lucky! 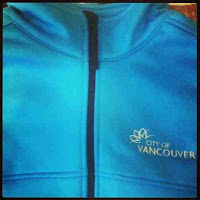 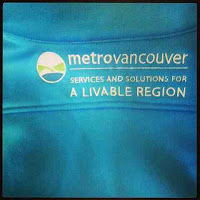 The City of Vancouver gave use these pretty blue vests as our uniform. It was just like being a Blue Jacket all over again, because the conference was held at Canada Place, a place where there are alot of tourists so people would see us and ask for all sorts of information and assistance whether they were part of the conference or not. The legacy of the beloved Blue Jackets lives on! 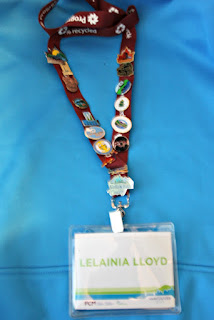 One of the great things about this job was that I got to meet and greet delegates from communities across Canada. There were delegates from Tanzania, Jamaica, the Ukraine and Belize as well. Many of the delegates brought pins to give out, from their cities. One delegate from Quebec handed me a pin as I was assisting him onto a bus and after that, people saw it on my ID lanyard and kept giving them to me. By the end of the conference, it was loaded! That was really lovely and unexpected. One of the delegates I spoke to from Manitoba actually knew some of my family! We both agreed that Winnipeg really is like a small town full of extended family. I gave her my card (and a hug!) so she could give it to my second cousin when she sees her.

I also had (by chance!) the opportunity to assist Green Party Member of Parliament, Elizabeth May when she arrived to give a speech at the conference on Sunday morning. I escorted her to the conference center and we had a really nice chat on our walk up. It's always interesting to get to know someone you see in the media even just a little when they are just being themselves. She is a lovely and I have to say I admire her dedication and perseverance. She is the first and only Green Party candidate to serve in the Federal legislature, so she truly is a trailblazer and a hardworking one at that.

Rick Hansen and Federal Liberal Party Leader Justin Trudeau were also at the conference, but I didn't see them, unfortunately. I was pretty busy dealing with transportation. I would have loved to hear what Rick Hansen had to say. I am hoping his speech was recorded and will be available online at some point.

I also bumped in the Mayor of Coquitlam, Richard Stewart. It was really nice to see a familiar face in the crowd and to know he was there working diligently on behalf of our community. I was completely dumbfounded at the intensity of the work that gets done at this conference. The schedule is exhausting, but it's extremely important. Our elected officials are working hard to strengthen our communities-I saw this first hand. 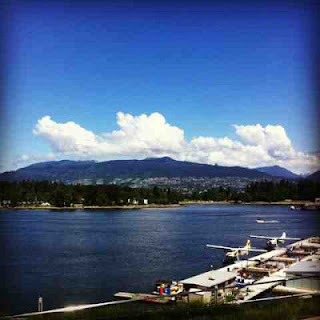 My teammate Michelle invited me to have lunch with her on Sunday, so we went to the Cactus Club at Jack Poole Plaza. The one side of the restaurant has these giant angles glass windows that electronically slide open on good weather days. We sat next to them and had this amazing view of Burrard Inlet. That's the Harbour Air dock in the foreground, looking towards Stanley Park and then beyond that to the North Shore Mountains. It's a million dollar view! 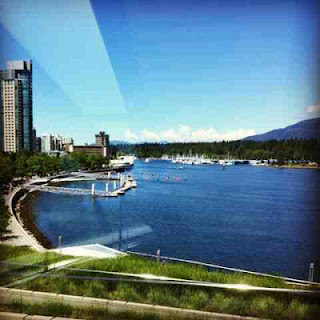 This is looking to Coal Harbour and the sea wall to the left. It was such a special treat to be able to relax and enjoy lunch with a new friend in between scheduled bus times. It's these kinds of moments that remind me how lucky I am to live somewhere that is so amazingly beautiful. I never take it for granted. It truly IS paradise.

One thing that really impressed me was that I had the chance to cross paths with one of the organizers, Mar Warrender who took the time to ask me how my volunteer experience was. It says alot about the organization that she cared enough to ask. I told her it was comparable to the other big city events I've been involved in. I've actually worked with volunteer coordinators, Mike and Carrie at another event, Vancouver 125 and they are fantastic. We were treated like gold and I really enjoyed the experience.

I especially appreciated being thanked for my service by Vancouver Mayor, Gregor Robertson, Coquitlam Mayor, Richard Stewart and by the countless delegates and their companions (husbands, wives, partners, etc.). It's always happy-making to know what you are doing is making a difference.

Not sure what's up next-I haven't had time to check my calendar. I do know that Peter Grande, president of MV-1 Canada is in town on business and I am hoping to be able to catch up with him while he's here to thank him in person for supporting the NMO 5km walk/run last weekend.

I am hoping to get out with my camera for a shoot soon-I'm having withdrawals. Time to make some art!!
at 9:48 am

Lovely! I'm glad to hear good things are happening for you :-)