What's Been Going On 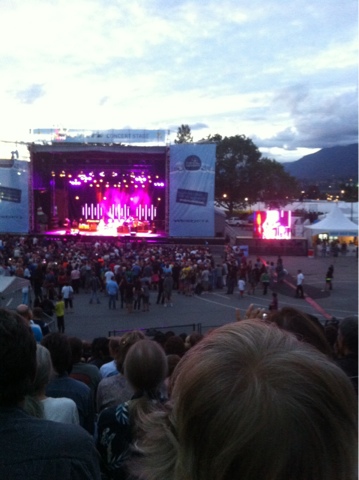 Last Saturday night my husband and I went to the PNE (Pacific National Exhibition) which is the big annual fair. They always have a summer concert series and last night, the fabulous Melissa Etheridge was playing. I've loved her for a long, long time and years when my husband and I were first married, we got tickets to see her at the Orpheum. He didn't know who she was, but he was so impressed by her, he fell in love with her too. 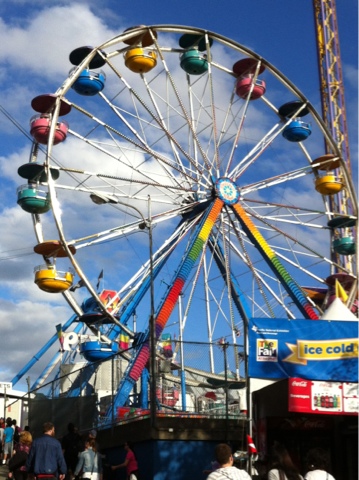 The beauty of the concert space at the PNE is that the view is so spectacular. You can see the north shore mountains, as well as several of the big attractions at the fair all lit up. Add to that a world class artist who knows how to throw a party and it's magic.

At one point in the concert, Melissa brought out a gorgeous electric guitar in vintage aqua, the same colour as my studio. I have no idea why, but this made me insanely happy and I sat there with this big stupid grin on my face the whole time she was playing it. I WANTED that guitar. The crazy thing is, I don't play but I seriously wanted that guitar. If I had that aqua guitar, I would learn to play, even with numb hands.

At one point in the evening, she talked about being cancer free for 9 years and not just being a survivor, but a thriver and then she sang "I Run for Life", her breast cancer awareness song. Saturday night she added lyrics to include male cancer survivors too. Listening, I was trying hard not to cry. It's become so personal for me, especially right at this moment when we're almost at the 1 year anniversary of my husband's diagnosis of kidney cancer. My heart's a little tender about that right now. This year has been one of the hardest of our lives on so many levels. It's our deepest hope that at some point we'll be able to say he's 9 years cancer free too.

It was a fabulous concert and it cheered my up greatly. The only downside was the yahoos sitting around us. There were three separate couples who decided to have loud arguments while Melissa was playing. Who does that?!? They were so obnoxious I was having trouble hearing the music. (And if you know anything about Melissa Etheridge, it's that she rocks the h*ll out of her concerts, so that tells you how disruptive they were being.) One couple was actually arguing about how many strings were on the guitar she was playing, if you can believe it. I'd have liked to El Kabong them with it just to shut them up!

I know things have been kind of quiet here lately. I've been struggling with my health again. I've spent alot of time in bed and it feels like my left leg is going to stop working any second now. My immune system just refuses to stand down, so they've upped my immuno supressants again and we'll see how it goes. At this point, I am just tired of the whole thing. Nothing seems to work.

Yesterday I finally met with the hand surgeon about my broken wrist. After a very painful exam which left me dizzy and about to toss my cookies, he did two diagnostic injections of steroids and freezing into the two parts of my wrist that are the problem. Let's just say when a needle hits bone over and over, it's torture. The pain from that is excruciating and it's going to be days till it settles down. In the meantime, am gobbling pain pills and icing it as much as possible. I was extremely grateful my best friend was there to hold my good hand while all this was done and to make sure I got home safely. She was a huge help and comfort to me.

I see the surgeon again in six weeks and then we decide which of two surgeries is going to happen. One involves removing a bone and the other involves shortening a bone. I'm pretty freaked out about the whole thing, especially the bone shortening prospect. That's got to be painful. Clearly something has to be done and I am hoping it will be taken care of before 2013 is over. This is dragged on for almost 6 month now as it is and I'd really like to have my right hand functional and pain free again.

When I got home from the hospital yesterday, there was a message from my husband saying he'd been injured on the job and he was at the ER. He tripped over a metal bar that the carpenters left sitting on the deck at his job site and fell between some columns, landing on the shoulder on the same side he had his arm surgery on a few months ago. He is okay, thankfully-nothing broken or torn-he's just understandably sore. Yesterday was about all the trauma I could handle in a single day.

On a positive note, I was asked to be a guest speaker at the 2nd annual NMO Information Day. I will be presenting on the Interprofessional Health Mentors Program that I've been involved with. I am so pleased to have this opportunity and look forward to sharing with other NMO patients how our stories matter to the medical community. My friend Nancy will also be presenting on the first ever (anywhere in the world!) NMO walk/run that she organized this past May.

If you are local and are interested in attending NMO Information Day, you can register here. If you're coming, be sure to find me and say hello!

Also in the good news department, my friend Andrea informed me the other day that it looks like two of the photographs I took for the Para XC Ski Program, Skiing is Believing are going to be published in a magazine! It won't be official till we see it in print, (with magazines, things are always subject to change) but we're pretty confident this is going to happen. Andrea's going to make sure I get some copies, so I'll share them with you when I have them in hand. I'm really excited about the prospect of having my photography appear in a sports magazine-that will be a first for me! If you're interested in seeing all the photos from that day, the entire set is here on my Flickr. It was such an amazing day and I'd do it again in a heartbeat.

Last, but not least, today is A&W's Crusin' For A Cause Annual MS fundraiser. If you're Canadian, please try and stop by any A&W location and purchase a teen burger-$1 from every burger goes to MS. If hamburgers are not your thing, but you still want to help, all locations are happy to receive donations to the Canadian MS Society. You can also use the hashtag #crusinforacause on Twitter on any of your tweets today and $1 for each tweet will also be donated. It's a very simple way to help fund the important research and support programs the MS Society provides to both people living with MS and also those of us rare birds living with NMO. (The CDN MS Society has very generously taken Canadians with NMO under their wing and are offering us the same services as those with MS.)
at 6:52 am

girl, you never cease to amaze me with your optimistic attitude. i would only hope that i would be half the person you are if i had the things going on in my life that you do! your hand stuff sounds just awful. :( i hope & pray you find the best solution. congrats on the speaking, the concert and the pics! you are a rock star.
praying for strength and healing for you and your husband. xo-m

You are such a strength to us...prayers to your husband in his healing..congratulations on your speaking invite..take care