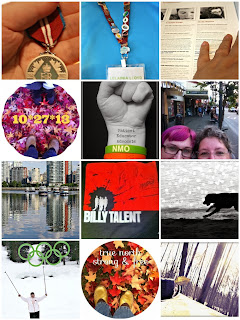 -Indy turning 5
-Pete's birthday (Any birthday while you are battling cancer is a big deal.)
-Our 23rd wedding anniversary (Happily every after!)

-Two NMO relapses. Treatment was pretty rough.
-Indy & Pete being attacked by a Pit bull and both badly injured. We were all traumatized.
-Pete had surgery to repair his injury which meant 3 months of recovery just as he was recovering from having his kidney removed for cancer. The day he went for surgery, the company he'd worked for for 23 years folded. It never rains, but it pours!
-Breaking my wrist for the 4th time, XC skiing. Took me 2 weeks to realize it was actually broken and not just a bad sprain. I spent 8 1/2 months in either a cast or a splint.
- The 1 yr. anniversary of Pete's cancer diagnosis
-In October, I spent 15 days sick in bed.  Caught what I refer to as "the plague" and couldn't shake it because I am on immunosupressants.
-Surgery on my wrist & arm almost 6 weeks ago. This has by far been the hardest thing I've had to go through medically (even worse than chemo) for a number of reasons. It can't heal fast enough.

Things I volunteered for:

Things I did that were fun and/or cool:


-Shared my story on MV-1 Canada's Life Without Compromise website & e-book
-Filmed for 5 days for a tv show which still has not aired-it keeps getting delayed.
-Was invited as an honoured guest for the Ferry Ballet on Canada Day with False Creek Ferries (Your loss Rick Mercer!)
-Saw Melissa Etheridge in concert at the PNE
-Went to Cranberryfest
-Attended my friend Andrea's thesis defence at UBC. She is now a Doctor of Philosophy!

Things that happened in my artistic life:

-Got addicted to Gelli plate printing thanks to my friend Penn
-Was published in Uppercase Magazine (Subscriber profile)
-Had some work accepted for publication in a book due out in spring 2015
-Attended the Vancouver screening of Indie Kindred with my friend Carol (I think I would have had more fun had I not been 2 days post-op and loaded up on pain killers.)
-Had Skiing is Believing photos published in Ski Cross Country Magazine
-Hit the milestone of receiving my 100th Etsy order!

-A year's subscription to Uppercase Magazine
-Tickets for a horse drawn tour of Stanley Park (Which we did on Pete's birthday in October.)
-Tickets to see Shane Koyczan, spoken word poet at the Vancouver International Jazz Festival.
-A beautiful necklace from the Vintage Pearl & all kinds of paper goodies from Curly Girl. They also sent me $25 gift certificates for both companies, which I have yet to use.
-Tickets to the Knowledge Networks premier of Home. I submitted a self portrait and wrote about it to win.
-Tickets to the BC Sports Hall of Fame
-A Sochi 2014 Olympic pin
-A box of Purdy's Turona chocolates (Which should be in the mail tomorrow!)
-Ipad mini & keyboard-this was a gift from my husband's boss and his wife, but it felt like winning!

My word for the year was FOCUS. Clearly, this was a year where that was important, with so many things going on. One of the things I really wanted to focus on accomplishing this year was to do more public speaking about NMO. I was really happy to have the opportunity to be a guest speaker at three different events and I hope to continue to do this in 2014.

Speaking of 2014, we've been through alot in the last year and a half and I think I am more than ready to have a really good year. I'm hoping 2014 is a kinder, gentler year.

Here's to a kinder gentler year. Lots of fun among all the crap of the year. I can't believe it's been a year since Pete's diagnosis. Glad that's in the past.

Here's to a kinder gentler year. Lots of fun among all the crap of the year. I can't believe it's been a year since Pete's diagnosis. Glad that's in the past.

Clearly a year of both highs and lows for you. Hoping 2014 beings you more balance...a much health!! Thanks for all your support and friendship in 2013.