Hello again! Well I have lots to share, so grab a cup of tea and settle in.

Last week, I had my 8 week follow up with the surgeon who repaired my wrist. I thought you might find it interesting to see his handiwork. This is the ulna bone in my arm. It's the one that runs from your wrist below your pinkie finger to your elbow. He sawed this bone in 3 pieces, removing a section in the middle, and bolted the two remaining pieces together using a titanium plate and 6 screws. This is where I have a rather long and spectacular scar on my arm, which is still healing. Surprisingly, this was the least painful of the two surgeries I had done. It hasn't really hurt since after the first 2 weeks post-op. Yay for that! The other surgery, on the heel of my hand continues to be incredibly painful. I am still trying to find the optimal dose of nerve pain medication to deal with that. *sigh*

Meanwhile, in the good news department, on Tuesday, I got an email telling me I'd won a 2 night stay at Summit Lodge & Spa in Whistler. This is the same lovely hotel I stayed at in August 2012 when I went to Whistler for Vivienne's You Are Your Own Muse photography class. Indy blogged a review of the hotel and they are going to share it on their Facebook page on January 27th. They are extremely dog-friendly and we love that because where we go, Indy goes!

In the email they sent, they said if I sent a selfie about winning, they would have a gift waiting in my room when I arrive. I thought it would be fun to send them this: 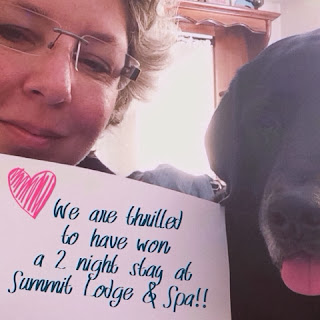 We look forward to visiting Whistler later this year and I am thrilled we get to stay at our favourite hotel! We LOVE Whistler.

In other news, awhile back, @CBCOlympics asked Canadians to tweet a message of support for Canadian Olympic athletes as part of their #OurAthletes project. I sent them a tweet. Yesterday they let me know that mine was one of twenty selected to be made into a pin. 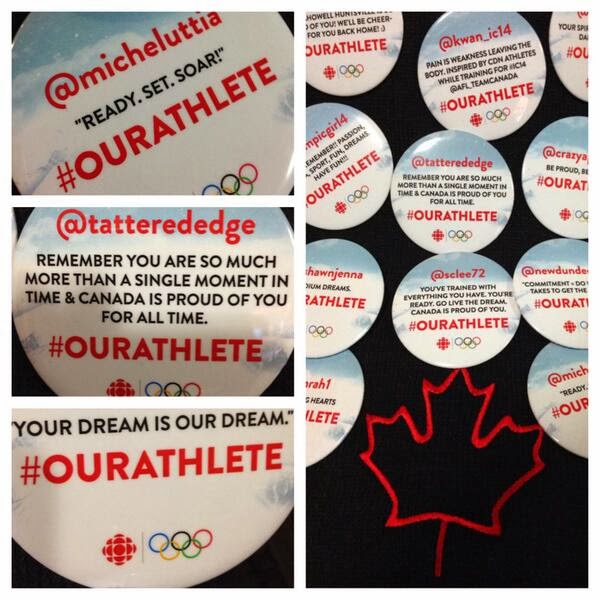 Monika Platek of CBC Sports has pinned these 20 pins to her scarf and is taking them to Sochi. As she meets Olympic athletes, she will gift them with a pin and snap a photo, which she will then share with the person whose message appears on a pin. I'd say that's pretty darn cool! I am so pleased to be able to participate in this project-I can't wait to see who ends up with mine! You can read about the #OurAthlete project here.

In other sports related news, I woke this morning to find an email from FIFA. I applied last year to volunteer for the FIFA Women's World Cup 2015. (Crazy to think I'm planning my life 2 years into the future!) Anyway, I was accepted! YAY! I fell in love with women's soccer when I volunteered for the CONCACAF Women's Olympic Qualifier for London 2012 and I couldn't be happier to support women's soccer in Canada (in Vancouver!) again in 2015. No idea what I will be doing yet, though my specialty is serving as a VIP transportation dispatcher, so that's a distinct possibility. I am sure it's going to be an amazing experience!

And while all this stuff has been going on, I quietly decided that this year's word is

May it be extraordinarily good in as many ways as possible!

Ok, those pins are SERIOUSLY COOL!

Extraordinary is a fantastic word! Looks like you've started the year off right.

You decided your word for 2014 is extraordinary?
That's because YOU ARE EXTRAORDINARY!

I know of no one else who embraces life as much as you. And I love you for it!