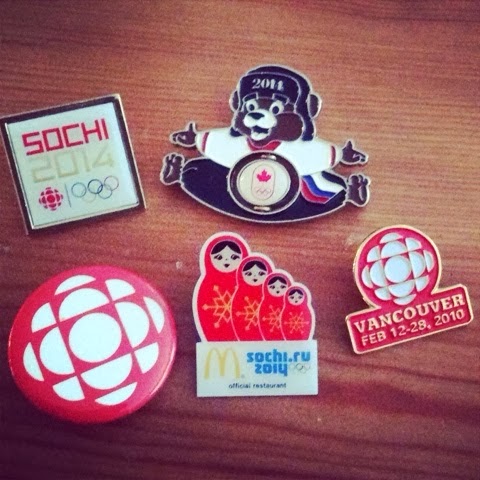 Just when you thought my Olympic stories were done...

Friday, CBC invited 2010 Blue Jackets (the nickname lovingly given to Vancouver Olympic & Paralympic volunteers) to come by the station for the Early Edition radio show. They were very kind to us and gave us all sorts of swag, in the form of pins (with the exception of the bear shown above-I won that one from Petro Canada, online.) and treats. 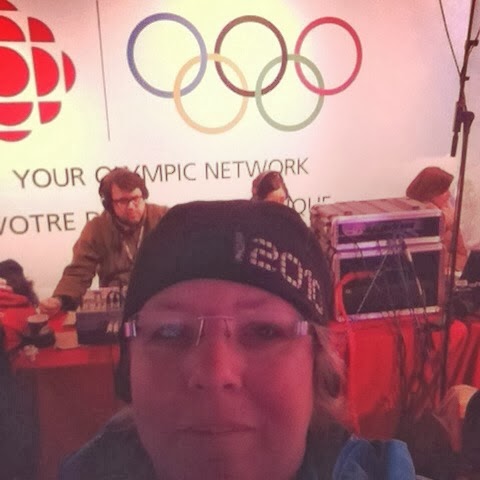 Here's a selfie I took in their official Sochi Olympic radio broadcasting booth. 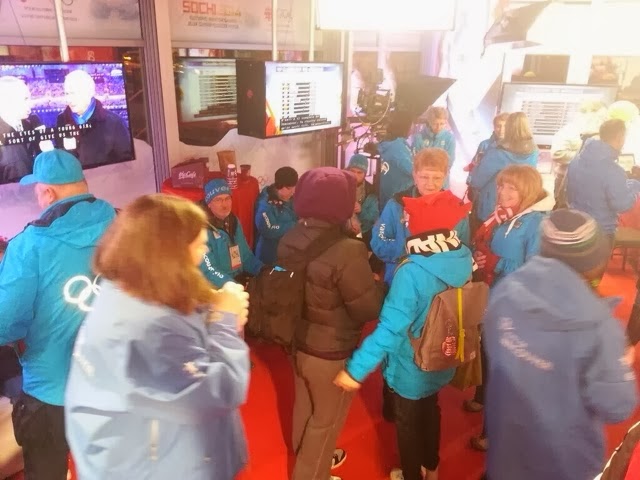 As you can see, the event was well attended. A small handful of us arrived at 5:30 am for the start of the braodcast. We were the keeners! It wasn't a problem for me, being an early riser. I was able to catch a ride with my husband, which was memorable because just as he was letting me off, he thought he'd turned backwards up a one-way in the downtown core. (He didn't-some idiot from the City of Vancouver had parked his pick up in the middle of the oncoming lane. It gave of both of us a moment of panic until I realized there was a yellow line down the middle of the street and we were on the correct side of it.)

I did a little on air interview about my favourite memory from the 2010 Olympics. 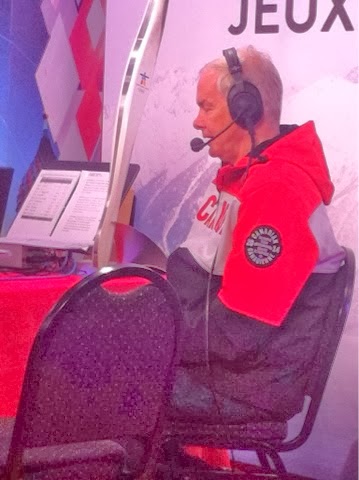 VANOC CEO John Furlong stopped by for an interview. 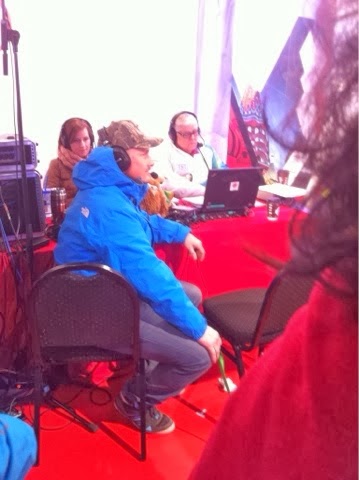 So did Canadian Gold Medalist in Snowboard, Ross Rebagliati. 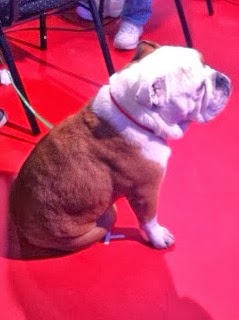 He brought along his bulldog Logan, who was very sweet. 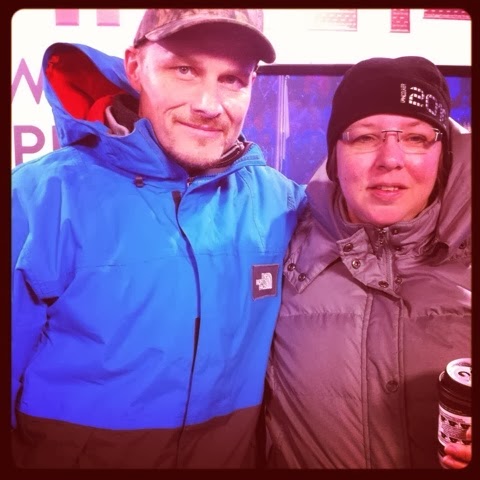 Photo op! (At this point, I'd changed out of my Blue Jacket and into my down parka because it was freezing!) 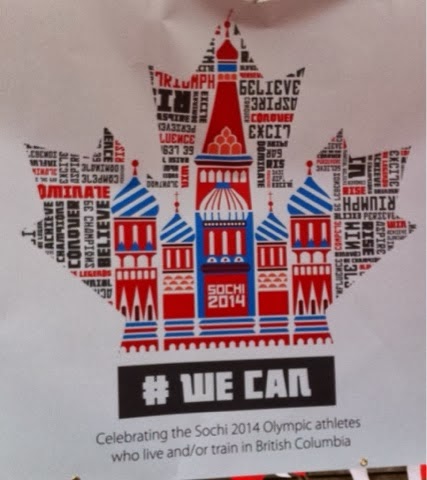 Sunday, the Blue Jackets were invited to Creekside Community Center in the Athletes' Village to celebrate the Games. 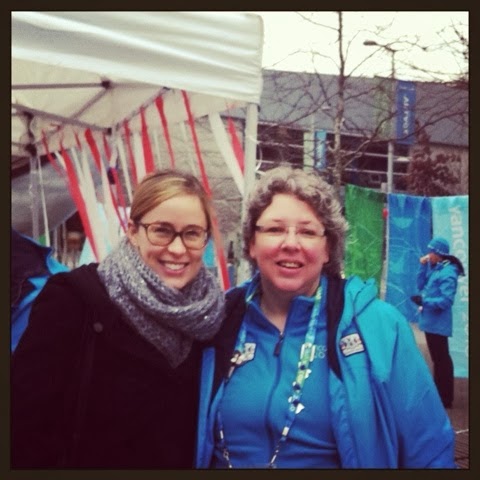 While we were waiting for things to get started, this reporter from CBC's French TV asked me to do an interview. It lasted about 5 minutes. 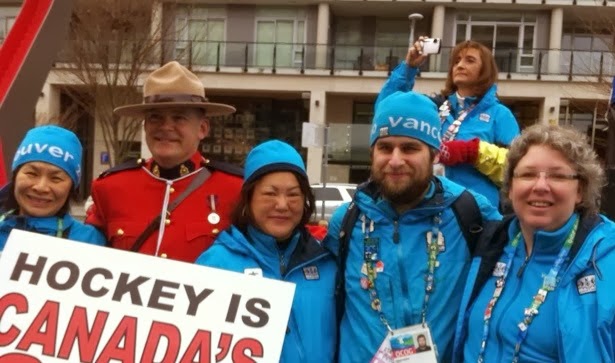 There was a parade, singing of the national anthem and then lots of entertainment, booths and food trucks. A whole bunch of reporters from tv and the papers came out. This photo was of the 5:30 am crew from Friday at CBC Radio and someone photobombing us in the background.

Incidentally, notice the RCMP member's medal? I have one just like it at home. I should have worn mine! 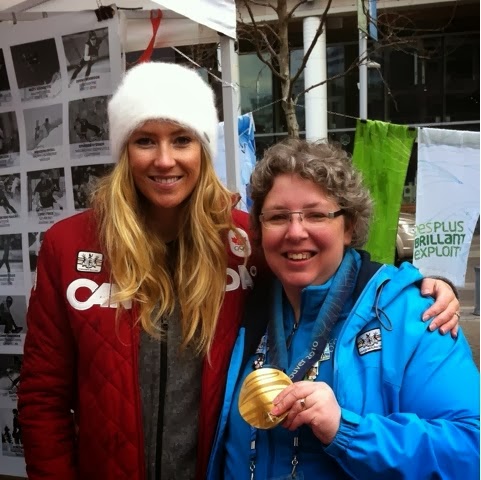 Canadian Gold Medalist Skier Ashleigh McIvor was there, letting Blue Jackets try on her medal and get a photo and she was also signing postcards as a thank you for our service in 2010. She was incredibly patient and generous with everyone. A real class act!

Just before I was leaving, I did a second TV interview with Brian Coxford from Global BC. 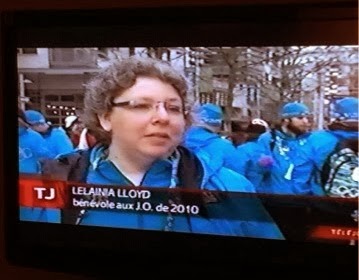 Here's a shot of me on French CBC. Having been on CBC TV and CBC Radio over the weekend, I feel like I've been validated as a true Canadian. *laughs*

One very wonderful thing that I wanted to share with you before I sign off, is that as of this morning, my friend Andrea Bundon  (Or should I say Doctor Andrea!) has officially been named to Canada's Paralympic Team, as a guide for Cross Country Ski athlete, Margarita Gorbounova. I am so incredibly happy and excited for them to compete and I'll be cheering so loud, I am sure they will hear me all the way from Canada!

In the meantime, you really should go check out Andrea's blog about Paralympic Sport, AthletesFirst. Seriously!

Of all the times for me to be out of the country and not listening to CBC! Looks like a great event and happy to see the Blue Jackets getting the recognition they deserve. And thanks for the shoutout :)