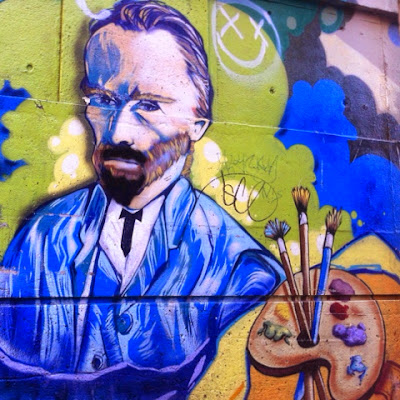 A whole week has whizzed by and I didn't get this posted, despite my best intentions. I had errands to run on last Saturday, down town. When I got back to the car, my husband pointed out the graffiti/murals in the laneway near where we were parked and then proceeded to drive down it slowly, so I could snap some photos. It was really cool! I'll have to go back sometime on foot and take better photos. 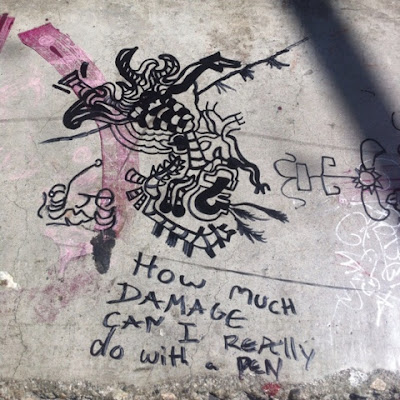 Some of my errands were at Granville Island. We had lunch there and did a walk about. This kind of amused me-graffiti outside Emily Carr. Those darn art students are *so* destructive! I actually enjoy finding their art work here and there around the campus. I purposely look for it. 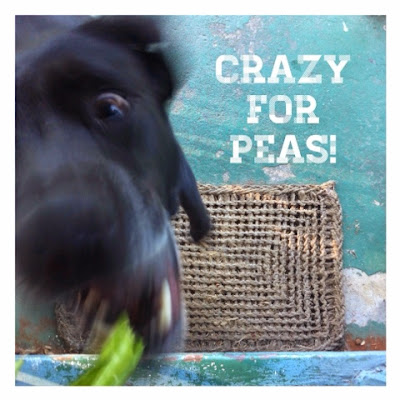 I shot this photo of Indy eating peas fresh out of our garden. It cracks me up! Blur, crazy eye and teeth! It must be said though that Indy is the gentlest and most polite dog and no fingers are ever hurt when giving him treats. He's so good I've let babies feed him cookies or freeze dried fish.

It really was a busy week-I delivered friends to the airport so they could fly off to Iceland (envious!), I had a Won with One board meeting and I also watched the episode of TV show I was on. This is the show I spent 5 days shooting last year-it finally went to air. I was very nervous about it because it was "reality" TV and it was a very odd experience. I can officially say I've been there, done that. 'Nuff said.

Here are a few token photos from the 5 day shoot. I didn't take too many because our schedule was pretty hectic. 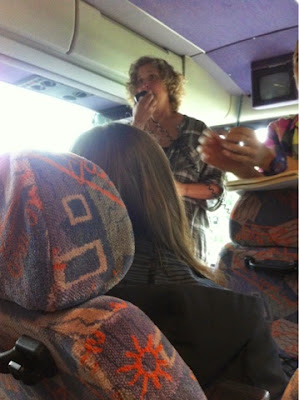 The Producer on the bus PA giving us the break down of what the day's shooting is going to look like. 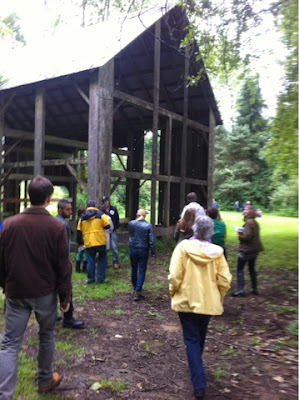 One of the locations we went to had this beautiful old barn. You can't tell from this angle, but I did get some pretty shots from the front, which I am saving to use in a project at some point. I adore old barns. 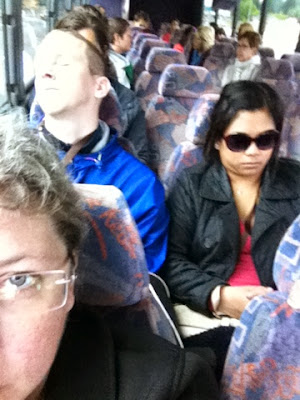 Selfie on the bus on the way home. I think this had to be day 3. We were all exhausted. I was suffering through a steroid treatment (pills) which was pretty awful. I must have been out of my mind to be doing tv while having an attack and taking major amounts of steroids which made me quite sick, but when I want to do something, I *DO* it. By day 4, I just wanted to be home in bed and on day 5 I spent the whole day reminding myself it was almost over.

I am about to launch into working on a secret project, which I will share more about in the fall. Meanwhile, speaking of steroids, I'll be spending 3 days next week at the hospital having infusions again. Not pleased, but if I want to keep using my hands and my left leg, I have to go do it. My summer is being taken up with hospitals and specialists and tests. Fun times! It is what it is. Autumn can't get here fast enough!
at 7:54 pm

The Van Gogh work is beautiful. And I just about keeled over with laughter when I saw the "How Much Damage can I really do with a pen" because the sarcastic voice in my head said, "well, if you steal the pen first, a lot! I think that means I'm getting over having all of my sharpies & paint pens stolen in the break-in :P