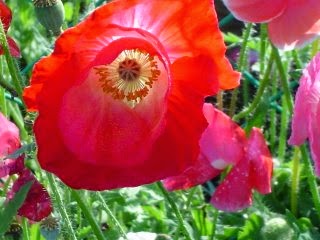 In Flanders field the poppies blow
Between the crosses, row on row,
That mark our place; and in the sky
The larks, still bravely singing, fly
Scarce heard amid the guns below.

We are the Dead.
Short days ago
We lived, felt dawn, saw sunset glow,
Loved and were loved, and now we lie
In Flanders fields.

Take up our quarrel with the foe:
To you from failing hands we throw
The torch; be yours to hold it high.
If ye break faith with us who die
We shall not sleep, though poppies grow
In Flanders fields.

The red Flanders’ poppy was first described as a flower of remembrance by Colonel John McCrae (1872-1918), who was a Professor of Medicine at McGill University of Canada before World War One. Colonel McCrae had served as a gunner in the Boer War, but went to France in World War One as a medical Officer with the first Canadian Contingent. At the second battle of Ypres in 1915, while in charge of a small first-aid post, he wrote In Flanders Fields in pencil on a page torn from his dispatch book when a close friend and former student, Lt. Alexis Helmer, was killed in the battle. Helmer was one of 6000 Canadian casualties in just 48 hours.

Colonel McCrae, while still serving in the field hospital, caught pneumonia and meningitis and died on January 28, 1918 in Boulogne, France. His volume of poetry, In Flanders’ Fields and Other Poems, was published in 1919.

By way of thanks to those who have served so that we could live in a country where freedom is taken for granted and for the sons and daughters of Canada who serve now so that we may continue to enjoy that freedom.