Back from Los Angeles! 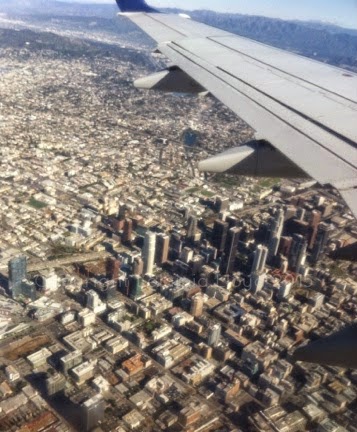 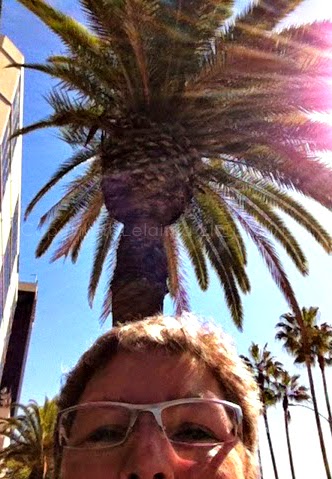 The drive to Manhattan beach takes about 20 minutes. While we were riding along, the driver popped in a tape that gives sort of a guided tour. I thought that was pretty okay because I am always interested in learning something about the places I am visiting. So we're going along and it tells me various things about what I am seeing when suddenly I realise I'm getting a narrative about the local raw sewage plant. Um...yeah...come to California, see our sewage plant! No thank you! (What were they thinking?!?) Fortunately, the script moved on from there with some fun facts about the beach. 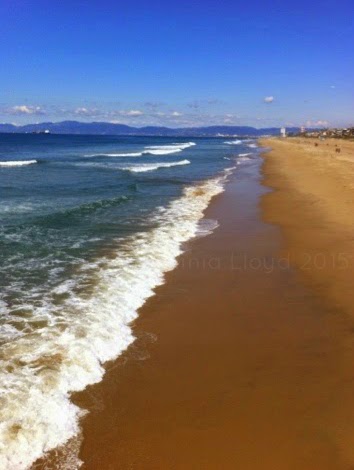 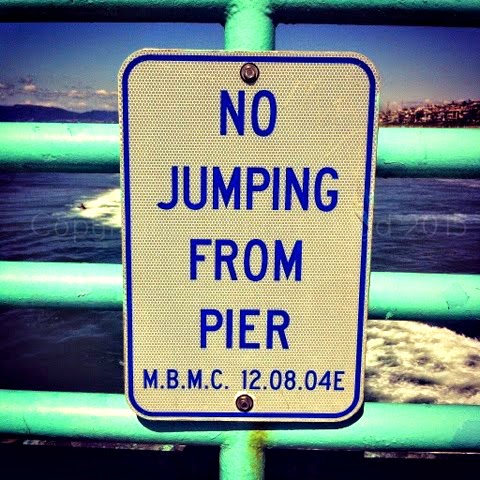 Manhattan Beach was really pretty. It reminded me a bit of White Rock, BC. It's a little seaside village with quaint little shops, eateries and an expanse of white sands and rolling ocean as far as the eye could see. There was also a really nice pier. I had fun poking around and taking photos. When it was getting close to the time when the next shuttle was going to come along, I popped into the local ice cream store and got myself a cone. I decided since it was about 24C, it was perfectly okay to have coffee ice cream for lunch. It was delicious!

I hopped back on the shuttle and went to the second of two malls to shop at the Whole Foods. I wanted to pick up some bottled water and some snacks. I have no idea where the locals shop for groceries other than there because not once in my travels did I see a regular grocery store. It was really weird. The other odd thing is that the hotel I stayed in did not have a mini fridge in the room. A fridge in a hotel room is pretty standard in Canada. 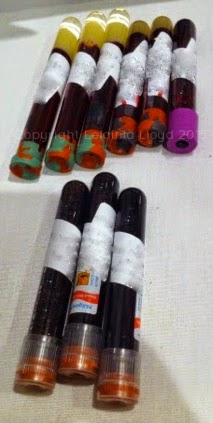 I got back to the hotel around 2 pm and was able to check into my room and then I had to go do my second blood draw for the CIRCLES Study. I did my first one a couple days before Xmas, so it's been awhile.They drew 9 vials of blood. This is about 4 tablespoons or 58.5 ml, which less than you would donate to a typical blood drive. From there, the blood they collected is broken down into 40 individual containers. All blood samples are labelled with a unique code.The blood samples are shipped immediately to the biorepository lab in the eastern United States were they remain until researchers working with the Guthy-Jackson Foundation apply for samples to work with. This is one way in which I can help researchers work toward a cure for NMO. If you're interested in learning more about the CIRCLES study, I posted about it here.


Wednesday was NMO Patient Day. If you want to read about it, I have a post on that here. It was a long, but very interesting day. I came away with my brain absolutely stuffed with information and ideas. It was so great to spend time reconnecting with friends, making new ones and just feeling the sense of community. Everyone was so welcoming and friendly. I was feeling pretty cruddy because a week before I had fractured a rib and was in a considerable amount of pain. Fortunately, I was able to get a prescription for morphine to help me cope. I would not have survived or even enjoyed the trip otherwise.

Thursday, I checked out of my hotel at 8:30 am and had the concierge stow my carry-on so I could do a bit of sightseeing before I flew home in the evening. I took the hotel shuttle to the airport and then waited for a bus company to take me to Hollywood. The bus was supposed to come at the top and bottom of each hour, but for some reason, I waited an hour and a half. The company's other buses kept coming and I would ask each one when the Hollywood bus would arrive and each driver would tell me something different. Obviously no one knew their own company's schedule. Eventually it did show up. The driver was a complete jerk. At one point, he was driving so recklessly, one passenger's hard shell carry-on which he'd told her to stow in the overhead luggage racks flew out and crashed to the floor, narrowly missing her. He was rude and unhelpful and by the time we arrive in Hollywood, I was glad to be rid of him. 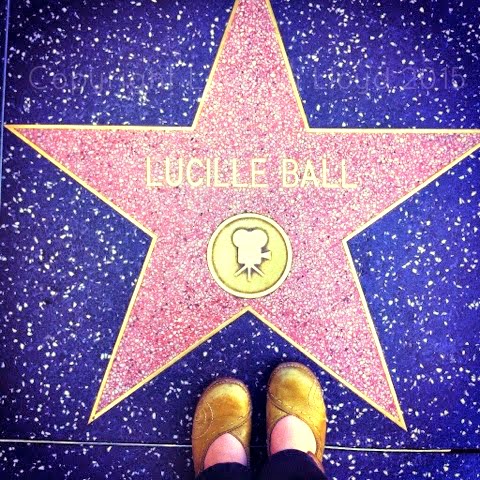 I was surprised that Hollywood Blvd was a ghost town. Aside from a small handful of tourists (less than 10, including me) the streets were deserted along the Walk of Fame. When I first got off, I was a bit worried I was in a sketchy part of town, but none of the people bothered me, save for one rather aggressive tour operator who didn't want to take NO for an answer. I said "No thank you." to her at least 5 times while I kept walking before she finally got the message. 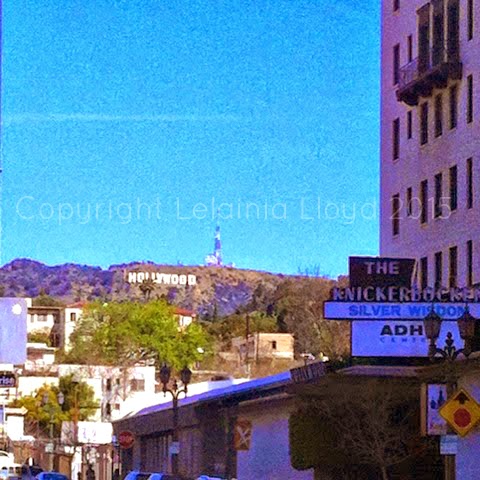 I wandered along and went into a shop to see about getting some t-shirts for the family. The shop I went into was perfect-they had really good deals on really nice shirts and the Mexican lady who ran the place was lovely. As I was walking out, I spotted a penny press. My son and I have pressed pennies on every trip we've been on for years. I was pleased to be able to add three more pennies to our collection. 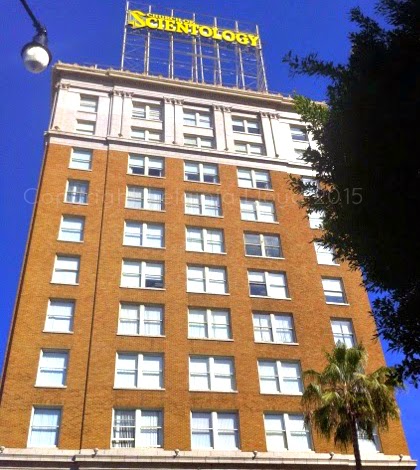 When I'd had enough, I started retracing my steps on the opposite side of the street. I walked right by The Scientology building. I'd snapped a photo from the other side of the street because hey-Hollyweird! As I passed by it, there were a bunch of women with pamphlets standing outside. I think they were hoping to entice people inside to see "The life of L. Ron Hubbard" (as advertised on the window in big bold letters) or something. I wasn't about to make eye contact and just kept going. 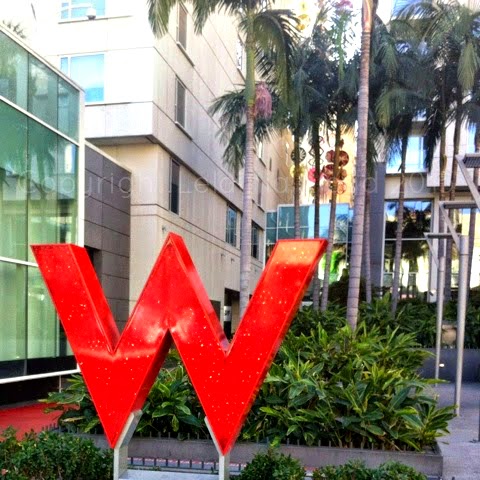 Eventually, I spotted a Starbuck's which was oddly comforting-my home away from home. I popped in to get a drink and discovered that in the US, they still sell the salted caramel cake pops! SCORE! I also bought a couple Hollywood mugs there, as I started a collection of these on our trips 6 months ago. So far we have Whistler, Toronto and Hollywood. I made it back to the bus stop just in time to catch the return bus to the airport. The driver this time could not have been any nicer if he tried. I gave him a decent tip when I got off. 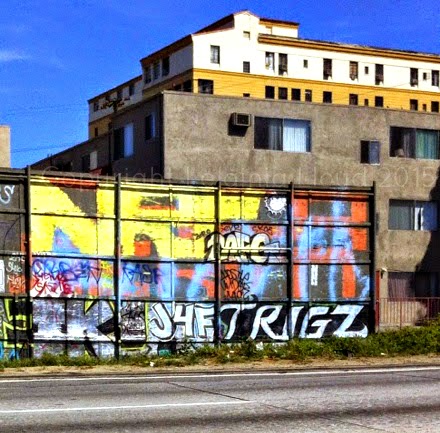 I caught the shuttle back to the hotel, had lunch and hung out with some fellow NMO patients before taking the shuttle back to the airport. I decided to go a bit early because I wanted to have dinner before my flight and I had no idea how bad the lines would be at the security screening. As it was. the lines were bad, but I decided to use the accessible line (membership has its perks) and managed to get through in less than 10 minutes. Dinner was delicious-a decent cheeseburger and then a shopped for a couple more shirts for my guys at Rip Curl. I loved the shirts I bought there-they have a huge full moon on them with the California grizzly in the middle of it.

While waiting for my flight, I saw that Delta had had a plane slide off the runway in the eastern US that day. Then, sitting at my gate, the plane at the gate next to me was delayed while mechanics figured out whether or not a rotor blade was damaged on a flight going to Austin. The airline rep who was giving passengers a blow by blow about the problem and the progress in fixing it was not inspiring confidence. Eventually he said "The mechanics think it's probably okay to fly."Probably?!?

My flight was uneventful until we came to land. We hit the runway hard and then bounced back up into the air. I knew that was not normal and I told my seatmate we were going to hit it hard when we came down again and we did. I was the last person off the plane and I overheard airport staff on their walkie-talkies saying the pilot was requesting an immediate mechanical inspection. If I had to guess, I'd say the landing gear jammed. At least we were able to land safely. Not a good day for Delta.

So...it really was a great trip. I learned so much, made new friends, reconnected with old ones and got a bit of sightseeing in on the side. I am really grateful to the Guthy-Jackson Foundation for making it possible. Oh and after I got back, I discovered that Randy Jackson from American Idol attended NMO Patient Day. It's wacky to think that he heard my presentation about the advocacy work I've been doing! Here's a photo of him at the conference. Go figure!
at 8:24 am