Saturday night I got to experience something really special. My friend Isabel invited me to the symphony and it wasn't just any symphony, but the VSO with CMDR Chris Hadfield! Being a huge fan of space exploration and this exceptional Canadian astronaut as well, I jumped at the chance.

I have to say this goes down as one of the most amazing experiences of my life. First of all, there was the music. Having lived with a hearing impairment my entire life, when I listen to music, it's very one dimensional to me. The Orpheum where the concert was played was built for sound so it felt like I was enveloped in the music. Usually I am all about the strings, but the epic scores they were playing really made the percussionists shine. I was fascinated by the endless variety of sounds they could produce. I couldn't take my eyes off them!

The highlight for me was hearing John Williams' score for the closing credits of Star Wars: The Force Awakens. His music is unmistakable in the way he layers sound and hearing that piece performed by classically trained musicians was incredible. My other favourite piece of the night was something I'd never heard before, but instantly fell in love with Holst's The Planets: Jupiter. Such a gorgeous piece! They paired it with photographs from outer space that were projected onto two big screens. It was really cool. Here's a link to a sampling of it. (The Chicago Symphony Orchestra is performing this version.)

CMDR Hadfield performed a number of songs from his album, including I.S.S. (Is Somebody Singing) which is my personal favourite. It was originally recorded with The Barenaked Ladies. Here's the video:

At one point, he was singing a new song, Beyond the Terror and I was sitting there thinking "Why is he singing about terrorists? That's a little harsh." The next day I was reading through my program guide and saw the song was"Beyond the Terra". Uh...yeah...okay that makes more sense! This is what happens when you have a hearing impairment. Fun times!

CDMR Hadfield also performed David Bowie's Space Oddity. He talked about the emails he exchanged with Bowie leading up to the video and cover he did while aboard the International Space Station. He said that Bowie expressed such joy that this song he'd written about how he imagined space travel to be was being recorded in the very place he he'd written about. CMDR Hadfield said it meant so much to know that he'd given Bowie joy in the final weeks of his life, when no one knew he was dying. Very poignant.

The UBC Opera Ensemble performed a piece from Star Wars: The Phantom Menace that was super creepy and dark. It was pretty powerful. I had no idea that UBC had an opera ensemble. 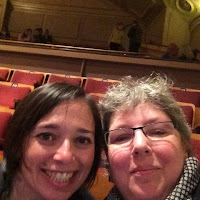 I had such a good time with Isabel and I feel so lucky to have seen this concert. It allowed me to cross two things off my life list-1. To hear CMDR Hadfield play live and 2. To hear John Williams' music played live by a symphony. Two things I will treasure forever. THANK YOU Isabel!!
at 9:43 am