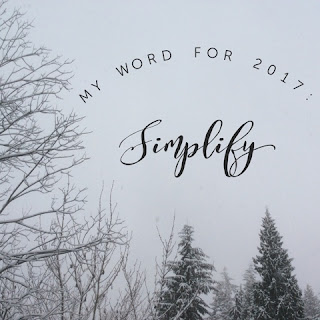 So in my last post, I mentioned that I'd chosen the word simplify as my word for 2017. I thought I would share a bit about why.

Almost 2 years ago, we moved, downsizing from a three bedroom house to a one bedroom condo. We cut our living space by about two thirds. Before we moved, I went through each room and purged things we no longer needed-some was sold off at a garage sale, a ton was donated to charity, some was re-homed with our son and then there was a small bit that was actual garbage. The idea was to not move anything that we didn't need or want.

Even though I eliminated a ton of stuff, once we moved, there was still a considerable amount of things that ended up in our small in-suite storage room (which is essentially just a small narrow closet with a few shelves) and in the two double closets in our bedroom and the front hall. After a year, I decided to go through the boxes in the storage room because I hadn't opened a single one the entire year and I was beginning to question if we did in fact need anything in those boxes badly enough to keep storing them. In that purge, I managed to eliminate 6 additional boxes of random stuff.

So here I am, two years later and still feeling like I could free myself of more stuff. And let me tell you, it really is freedom. I have less stuff to dust and take care of. My home is neater and more organised. I spend less time looking for the things I need because almost everything is where it needs to be. That said, there are still boxes in all the closets, most of which I think I can now let go of.

It's been an interesting process. I am certainly far more mindful of bringing anything new into my home and when I do, I make sure that if it's replacing something, that I remove the old item immediately. I don't have a ton of nick knacks now either-I hated dusting them all when we lived in the house but I didn't have a choice because I have allergies. That's not to say I don't have a few, but I am far more selective about it. This has allowed space to display actual art that either I've created or have been given to me by artist friends, which I love.

Another thing that I worked on over the fall was creating a capsule wardrobe. Essentially it's a small collection of clothes that mix and match and serve your life better. I always hated opening my closet and having to sift through clothes I didn't like for whatever reason, clothes that needed repair or that didn't go with anything else. It took me awhile, but my capsule wardrobe is almost complete for the colder seasons. I will have some work to do in the summer, but it should be minimal. I might sound a bit of an odd exercise, but doing this has gotten rid of the daily stress of thinking I don't have anything to wear. I can reach in and pull out an outfit immediately, without having to give it much thought. I'm a busy person, so this is a win in my book.

My capsule wardrobe isn't expensive or fancy-I built it around what works for my life. Here's a quick run down:

-T-shirts (in a variety of colours, mostly v-neck, short, 3/4 & long sleeved)
-Tank tops (for summer)
-Dress shirts (a couple for wearing over t-shirts & tank tops)
-Cardigans (one dressy, one casual)

That's it! As I said, I will have to add a few things in the summer, but not much. I don't have dresses or high heels because I would never wear them. At some point, I do want to add a blazer, but I haven't found one I like yet. If you're interested in the idea of a capsule wardrobe, do a search on Pinterest-there are tons of articles about them. I recommend thinking about what your day to day life really looks like and choosing pieces based on what you know you'll wear. Go through your closet before you shop and get rid of clothes that are worn out, stained, badly out of style, (like say a neon crop top-if you have that hiding in your closet, BURN IT!! The 80's are gone and no one ever looked good in that anyway!) and things that just don't fit and don't make you feel good when you wear them. Once you've done that, you will be able to see where the holes are in your wardrobe and can shop accordingly. It's helpful to make a list of what you have and what you need.

I am also working on purging my studio. I did a big purge last spring, but I still feel like I need to weed out a bit more. My biggest weakness is ephemera. I confess I am a paper hoarder. I have several small boxes of ephemera and while those boxes are small, do I really need several? I want to make a concerted effort to use up some of the contents of those boxes in the near future and then limit myself to a single large box. If I'm going to do that, then I will need to make a bunch of journals! I'd better get my sewing machine set up!

Recently, I downloaded an app called "Any List" to my phone and I love it! I am a list maker from way back and it's helping me keep track of my grocery list, but you can use it to make (and share!) lists for just about anything. It remembers the grocery items I've entered before, so once a list is populated, you can call it up and just cross of anything you don't need each week. As I am shopping, I can tap on each item I put in my cart and it disappears from my list. Super helpful!

So there are just a few ways I am simplifying my life in 2017. I've been looking at the things that are challenging or stressful and figuring out how I can make them less so. Like anything, it's a work in progress, but for me, minimalism is really my way of practising self-care.