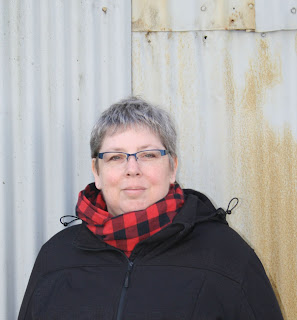 So...my plan to be more present here was all shot to hell by a number of things. That saying "Life is what happens while you're busy making plans." about sums it up.

It started out with my father in law being diagnosed with terminal cancer just after New Year's. We lost him a few weeks later and things snowballed from there. I have been dealing with a whole slew of health stuff, not the least of which was the worst NMO attack I've ever had. It landed me in the hospital for 12 days, where, I promptly caught flu. I have never had flu in my life and had to go to a hospital to get it. Putting someone who is triple immunosupressed anywhere but in a private room is sheer stupidity. Let's just say it was a hellish 12 days and they sent me home sicker than when I arrived. I am still struggling to recover. So far, 2018 has been rough.

On a more positive note, I was contacted by The Rick Hansen Foundation just before Xmas, asking if I would be interested in writing for them about invisible disability. I was very surprised. I didn't even know I was on their radar. Apparently once you've been a Difference Maker, you are a part of the family. I am pleased to share that my first article was published on March 4th, while I was still in hospital. You can find it here. Rick Hansen, for those who aren't familiar is a Canadian icon and one of my personal heros. You can learn more about him here. I am humbled and honoured to have the opportunity to share my story and experiences as someone living with invisible disability, rare disease and chronic illness.

I have been keeping busy working with my UBC Health Mentor students. In my current cohort, (my fifth!) I have two women and two men. The women are a student in speech & language pathology and a medical student. The men are a nursing student and occupational therapy student. It's the first time I've had male students and I've been enjoying the new dynamic. My students are so great to work with. We laugh a lot and I am really enjoying spending time with them. I am going to miss them over the summer. (After April's symposium, we don't meet till October and our last meeting for this cohort will be in November. The time always whips by so quickly.)

I also volunteered to work with the UBC Physiotherapy program in early February to help their students learn about assessing Rheumatoid arthritis patients. It was really good timing for the students to assess me because I am having a big flare and so they got to see and feel first hand what that looks like. I've worked with the PT program twice before helping students get their patient interviewing skills but this was new to me. I enjoyed learning too. The students in the PT program are such lovely people. I always enjoy working with them. I will be doing more of this type of volunteering in a couple of weeks through the same program, but this time at the local hospital's arthritis clinic.

Since I've been home from the hospital and still dealing with some serious health issues and having treatment, I've been forced to stick pretty close to home and take things easy. My best friend gave me Rae Massigman's Pocket Journal class for my birthday, so I have slowly been working on my little journal. It's been fun playing with paint. 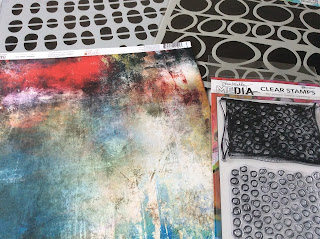 My mother in law sent me a cheque for my birthday and I treated myself to some new art supplies yesterday-two stencils, a set of stamps and some cool paper. I haven't bought art supplies in ages-in fact I had recently gone through my stash and purged a big chunk of it. I donated the excess to a friend who teaches art to kids. I know she will put it to good use. I am not a hoarder of supplies. I like to use what I have and there was so much stuff I've had sitting around, taking up space that it seemed like a good time to pare down and reorganize. I am really glad I did it. I have all my paints, stencils and water soluable oil pastels in one of those Ikea rolling carts. Best thing ever! I can roll it right up to my desk and have everything I need right there. I can also roll it out onto my patio in the summer and spend the day creating outside. My plan is to get a nice patio set (small table & comfy chairs) so I can have an outdoor studio by day and a nice place to have dinner al fresco by night. Indy likes to spend most of his time outside on the patio when the weather is warm and I think I would like that too. My patio has a big shade tree in front, so it stays nice and cool out there. I am on the hunt for the right furniture to make this happen.

My best friend and I went to see Isle of Dogs last weekend. I wanted to see it for the art. It's a Wes Anderson stop motion animation film. I wouldn't say it's for kids-I think they'd quickly be bored. It's aimed more at fans of the genre. Lots of big names in this one. What surprised me was that it was about 2 hrs long. Usually with animation, the films are much shorter, so well done Wes Anderson! The are billing it as a comedy, but while it had some funny moments, I didn't think it was, really. My favourite line in this film was "Fear had been mongered." I enjoyed it and if you like this sort of thing, you'd better go see it before it's out of the theatres.

So that's the Cliff Notes update of where I've been and what I've been up to. I am going to make a concerted effort to get back into regular blogging. Back soon!