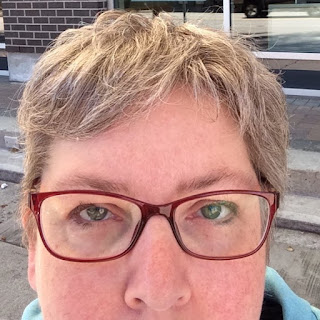 Hello again! I had planned to post much sooner, but life has a way of upending even the best laid plans. I caught an awful bug and was in bed for several days feeling absolutely terrible. I am over it now I think and hoping that I can avoid catching anything else through the end of the year. I am so sick and tired of being sick and tired!

As you can see, I have new glasses. The ones I got a year ago were no longer doing the job since I had optic neuritis, so I had to upgrade. I chose red frames, even though I really wanted purple. The general consensus is that these were a good choice, so that's something.

Here's some of what I've been up to:

Believe it or not, I've been doing a lot of writing in the last little while. I just completed my artist statement and bio for the Universal Declaration of Human Rights Quilt Project which I wrote about here. Tal will be creating zines for each of the four quilts featuring each artist in the quilt using this information. I am really looking forward to reading the inspiration behind each artists' work. As things get uglier in the world, this project and its message seems more timely than ever and I am proud to be a part of it.

I have also been working on my second article for the Rick Hansen Foundation blog, which will be posted in mid-August. The first one, if you missed it, is here. I am trying to keep ahead of the game because August is going to be a busy month.

The 5th season of Alone premiered last Thursday. Previous seasons have been in British Columbia (three seasons) and Patagonia. This season is taking place in Mongolia and it's all participants from previous seasons who tapped out for various reasons. I loved the seasons shot in BC-it was highly amusing to hear people railing about the weather. It somehow came as a surprise to all of them that a temperate rain forest actually gets a lot of rain. I guess none of them did any research on the area they were going to be going to.

My friend Greta and I are rooting for Nicole who has MS. She is amazingly comfortable in the wilds-in her previous season in BC, she was sharing her beach with huge black bears and seemed entirely unfazed. She was respectful of the bears, but wasn't the least bit afraid of them. She also has an impressive knowledge of plants and was able to source from her environment things to help keep herself healthy. We hope she wins this time!

The 6th season of Wentworth premiered this week. It's an Australian series about a women's prison that is dark and delicious. I love it! Previous seasons are on Netflix. 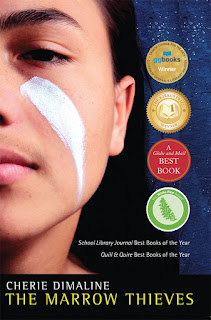 The Marrow Thieves by Cherie Demaline who is a Metis author. This was recently loaned to me by my friend Sue's husband. He was telling me about it at Sue's birthday party and when I read the cover, it gave me the shivers, so I knew I had to read it. It's been a bit slow going because I am still having eye issues, but I'm enjoying it. Here's the summary:

"In a futuristic world ravaged by global warming, people have lost the ability to dream, and the dreamlessness has led to widespread madness. The only people still able to dream are North America's Indigenous people, and it is their marrow that holds the cure for the rest of the world. But getting the marrow, and dreams, means death for the unwilling donors. Driven to flight, a fifteen-year-old and his companions struggle for survival, attempt to reunite with loved ones and take refuge from the "recruiters" who seek them out to bring them to the marrow-stealing "factories.""

I have been waiting (im)patiently to hear back from a medical conference I've applied for a scholarship to attend as a patient partner. I should be getting news one way or the other next week. I am pretty sure com-petition is fierce, but if you don't apply, you'll never get a yes. I also applied for a scholarship for another one taking place in October but I won't hear back on that one till mid-August. I am *the worst* at waiting. It drives me batty.

Other than that, we've been enjoying dinners out on the patio almost every night. It's a nice way to reconnect at the end of the day and enjoy the peace and quiet. I've also been taking my laptop out there and writing while enjoying the fresh air. It's nice to finally have the space to be able to do that. Once I get my article completed, I can think about what projects I want to tackle over the summer. I need to make a list!
at 12:03 pm