I am always eager for the opportunity to advocate and raise awareness for this rare disease I live with, so when I was contacted by the Canadian MS Society in mid-April, asking if I would be interested in speaking to a pharmaceutical company about living with NMO of course I said yes.


I prepared a powerpoint presentation to share. I was glad for all the selfies I’ve taken of various health care experiences I’ve had-screening for clinical trials, having plasma exchange (PLEX), infusions of biologics and so on. It allowed me to visually underscore the kinds of things I deal with on a day to day basis in a way that mere words cannot.

Arrangements were made and I flew out to Toronto. I was treated to an amazing Italian dinner with my hosts, who were the organizing committee for Alexion’s meeting. We talked about my experience as an NMO patient over dinner and I got to know each of them. I’d been a bit nervous about walking into a situation where I didn’t know anyone, but I needn’t have worried-they were so warm, friendly and funny, it was like hanging out with old friends. They completely set me at ease and the time just flew by. 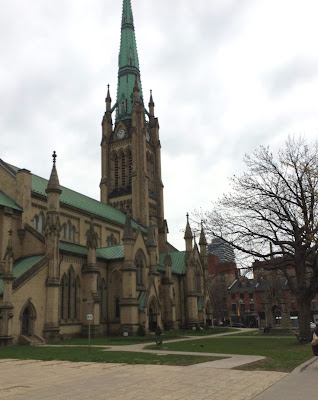 The next morning, I walked over to the conference centre, which was a couple of blocks from my hotel. The conference centre is housed at St. James Anglican Cathedral, which is the oldest church in the city. It was built in 1850 and its congregation dates back to 1797. The white brick and sandstone buildings are beautiful. Breakfast was waiting when I arrived. After a lightning round of introductions, I grabbed a quick bite and then the meeting was underway.

The general manager of Alexion Canada made his opening remarks. While he was speaking, I could hear this odd squeaking sound behind me and I kept wondering who was doing what while he was speaking. When I finally turned around to see what was going on, I got the most amazing surprise-it was a graphic recorder-the squeaking was the sound of her pens on the whiteboard she was working on. Graphic recorders capture people’s ideas in words, images and colour as they’re being spoken. They create a visual representation of the collective wisdom of the group and allow information to be processed in a new and dynamic way. I have a friend who owns a graphic recording company and he travels the world doing this amazing work. I knew the value of this practice and as an artist, I was super excited to be able to experience it first hand.

Angela Covert, from the MS Society of Canada spoke first, explaining the MS Society’s role in supporting NMO patients. In 2014, the MS Society very generously took neuromyelitis optica (NMO), transverse myelitis (TM) and acute disseminated encephalomyelitis (ADEM) under its wing as allied diseases. Patients with these diseases are often initially mis-diagnosed with MS and thus many of them are already connected with the MS Society. This move has allowed anyone with an allied disease to access the same support services as those living with MS, which is enormously helpful. Angela mentioned that up to this point in time, the MS Society has not had a huge demand from the NMO community for services, due largely to what we’re guessing is simply a lack of awareness, but I spoke to her afterwards and we are going to partner to see what we can do to change this. 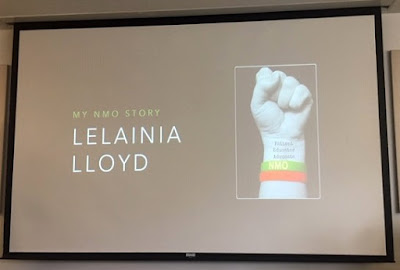 Next it was my turn to speak. Since I was telling my story, I didn’t write a speech, but made some notes of some key points I wanted to make, so I wouldn’t forget. I talked about my 29 year journey to diagnosis, the impact of NMO on my life, the litany of drugs and treatments I’ve cycled through (some of which had disastrous results),  the extensive list of specialists on my care team, the ways in which I participate in research to help move the science forward and the ways in which I serve the MS and NMO community. 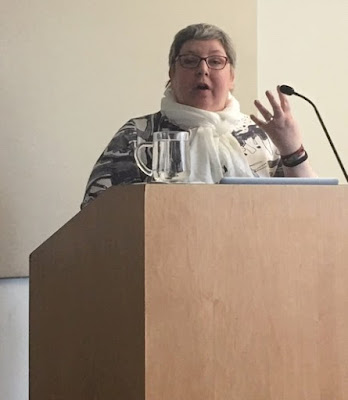 To balance things out because I’m not just a patient, I felt it was important to share a bit about who I am as a person. I talked briefly about being an artist, a lifetime volunteer and a wife and mother. I closed with sharing that it was the one year anniversary of the loss of a friend who also had NMO. Of course I couldn’t verbalize this without getting emotional about it, because every loss in our community is personal and I feel it very deeply. It makes me desperate to work harder and faster to do everything I can so we don’t lose anyone else to this devastating disease. Afterward, I was asked if I’d realized that I had everyone in the room in tears. That was a very powerful moment. 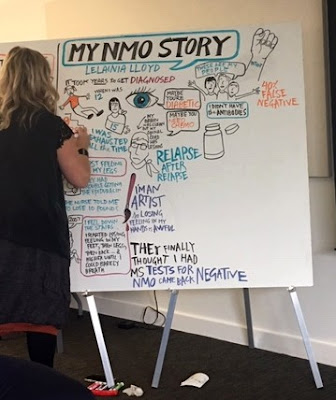 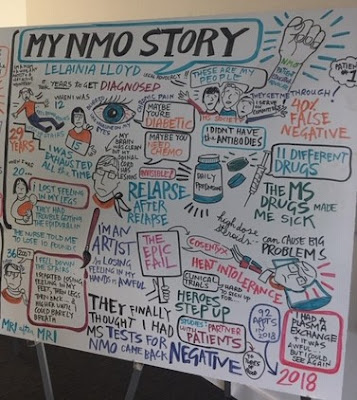 My story as interpreted by the graphic recorder.

It wasn’t until I finished speaking that I remembered there was a graphic recorder in the room and I was delighted to see how she had interpreted my story. She did an amazing job! I love that she was able to capture the essence of my story in such a compelling way. I also loved how she drew a cartoon me. I’m such a visual person and seeing how my message came across to others was really enlightening.

It’s taken me some time to write this because I’ve been thinking about this whole experience a lot. I am so grateful that I was given this opportunity. The people of Alexion have succeeded in getting a drug for NMO through clinical trials, which is utterly amazing.  As much as I was at this meeting to help educate them about the patient experience, I also learned a lot about Alexion as a company and the individuals who work there. Like any science, the work they do is challenging. Research and drug development takes time and time is money. I think too often we forget that there are good people working in what we’ve come to think of as “big pharma” who genuinely care about people living with rare disease and who want to make a difference in our lives through the work they do. It was important to me to thank them for being our allies-I don’t think they hear this often enough from the people whose lives their work directly impacts.

Having had the opportunity to meet and get to know the team at Alexion, I feel enormous gratitude that they’ve taken NMO on and have had a successful clinical trial. All of the drugs we’ve used so far-Imuran, Cellcept and Rituxan have been off-label use. Once you cycle through these drugs, either because they’ve stopped being effective or the side effects have become problematic, you’re out of options. Not having options can have devastating consequences-NMO left untreated causes blindness, paralysis and in the worst case scenario, death. Having drugs specifically developed for the treatment of NMO opens up more options and options equal hope. You cannot put a price tag on hope. On our worst days, this is what keeps us going.

Disclosure: Alexion paid for my travel costs. All opinions expressed herein are entirely my own.

Older Post Home
All content of this blog is copyright of Lelainia N. Lloyd/Tattered Edge 2004-2018 and may not be used in any way without permission. Please keep your karma good by respecting this. Thanks!