Hello to those of you who have hung in, waiting patiently for my return to blogging. It's been a tough year for me physically, so that's why the extended absence. Anyway, not being one to dwell, here's what 2016 looked like: 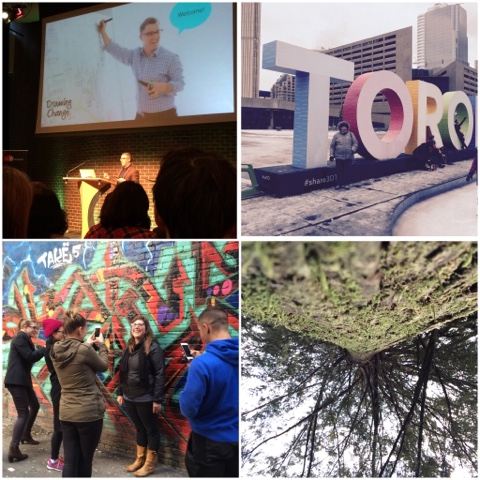 -My friend Sam Bradd spoke about life as a graphic recorder at Creative Mornings Vancouver.

-I returned to Toronto to do my second term as the Community Representative for BC. This time I was doing grant reviews for Community and Population Health for the MS Society of Canada. I got to have dinner with my NMO sister, Jenna, which was a bonus.

-I won a class with Vivienne McMaster on iPhoneography. I took this shot, which she like so much she used it to promote the class since.

-Inspired by that class, I dove back into photography. I took this shot shortly after and I love the odd perspective. 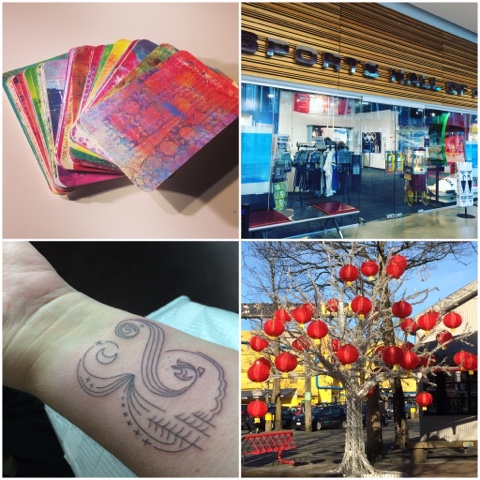 -I won a class with Tara Leaver called Oracle Cards and made a deck of mindfulness cards from gelli prints I made.

-I won tickets to the premier of Race about Jesse Owens from the BC Sports Hall of Fame.

-I got new ink-my campersand tattoo which was an Xmas gift from my son. Every time I look down and see it, it makes me so happy.

-Husband and I enjoyed the warmer temps with a trip to Granville Island. (The tree was decked out for Chinese New Year.) 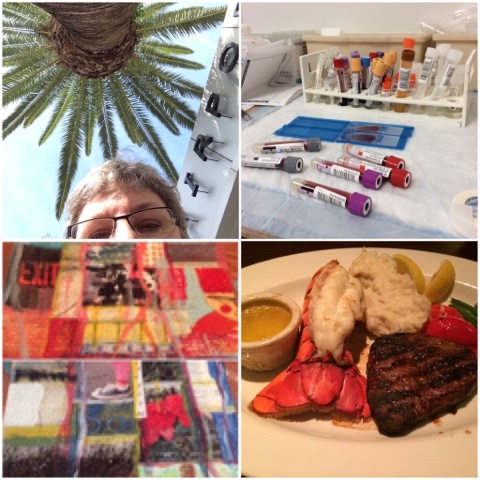 -I flew to LA for 3 days for the NMO Patient Day. I had a great time connecting with my community. I also tried Uber for the first time.

-I screened for a clinical trial. After jumping through extensive hoops, I was excluded from the trial, which was very frustrating.

-For my birthday, I took an online class with Roxanne Coble called Creatures. Playing with paint is always so much fun.

-My husband and I celebrated with surf and turf at the Keg. 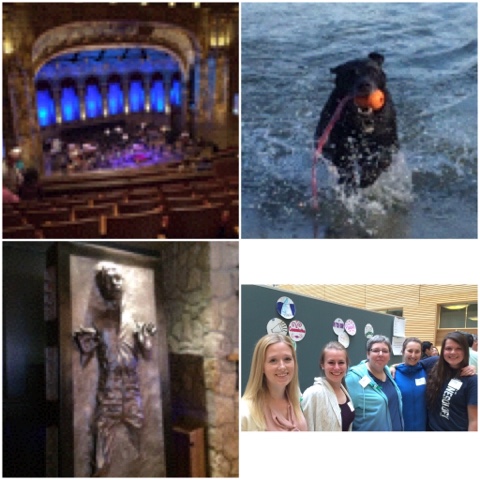 -My friend Isabel treated me to an evening at the VSO featuring Canadian astronaut Commander Chris Hadfield. This goes down as one of the best musical experiences of my life. I am still listening to Holst's The Planets: Jupiter.

-We started taking Indy up to the lake-it was finally warm enough.

-We went to a belated birthday dinner for me at Storm Crow Alehouse. Love Han Solo in carbonite!!

-My Health Mentors students and I did the annual symposium. 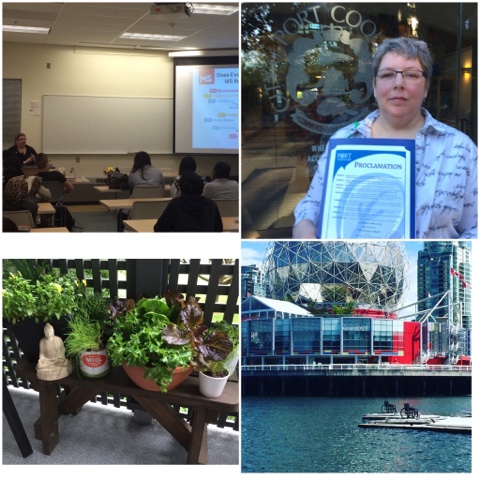 -I spoke at UBC at the Operation Med School about the work the MS Society of Canada does and about NMO. I did an interactive piece where students could experience some of the symptoms people living with MS and NMO deal with on a daily basis which was a huge hit.

-I also gave a short speech to Port Coquitlam City Council and accepted a proclamation from the Mayor on behalf of the MS Society. My husband came along and this was the first time he's heard me do public speaking. Afterwards, he said "I could never do that!" It gave him a quick glimpse into some of the advocacy work I do all year long.

-I started a lettuce and herb farm on my patio.

-I took this wheelchair photo on False Creek, which is one of my most favourites this year. I call it "Gone Paddling". It speaks to ability. 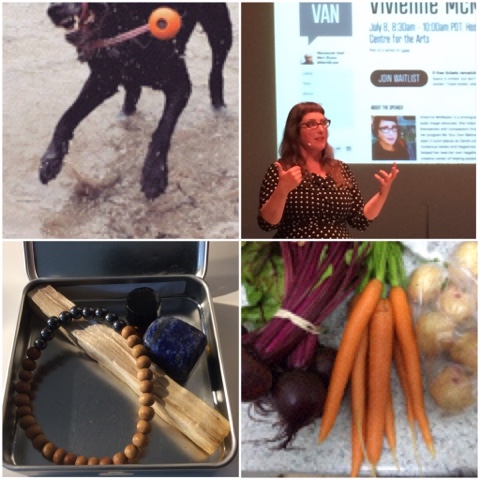 June & July:
(Lumped together, because by this point, I was very unwell.)

-Another most favourite photograph of Indy up at the lake. I love that it's partly out of frame and shows him wildly swinging his water Kong and his teeth. He is in utter bliss retrieving and swimming.

-Vivienne gave a talk on self-love at Creative Mornings Vancouver. Even though I was feeling terrible, I wanted to go to support her.

-I won a class with Bella Civoric, Holy Hush. This was the kit that went with the class.

-We made a few quick trips to the Farmer's Market to get fresh veggies. I always love supporting our local farmers. 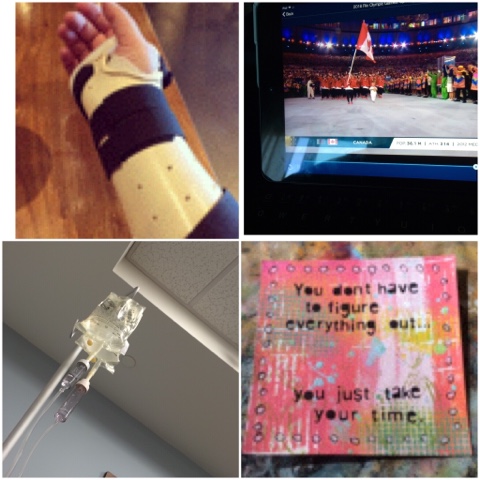 -After suffering with brutal tendinitis in my right arm for 8 months (at this point) the brilliant arm surgeon decided I just needed a custom moulded brace. *sigh* Here it is now the last days of December and I am still in pain. *SO* not helpful.

-Spending 14 weeks in bed over the late spring and entire summer had one bright spot-the Olympics & Paralympics were on. It cheered me greatly to watch our women's footie & rugby 7's win bronze medals and to watch WC Rugby.

-At the tail end of August, I started on Rituxan infusion to treat both my RA and NMO. Making the shift in treatment was weird.

-I actually managed to eek out a wee bit of art during this time, inspired by Mandy Stewart. 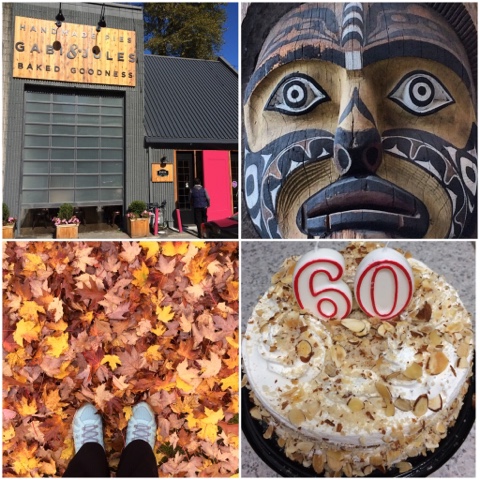 -Husband and I went on a date to a new local bakery, Gabi & Jules who do amazing pies. They sell at our local Farmer's Market and just opened their brick and mortar store. It's great to have such a nice place to have tea and pie when the mood strikes.

-I had the opportunity to visit the Museum of Anthropology at UBC for free and to take a tour that talked about activism and art through the Creative Mornings Vancouver Field Trip program. I have had a visit to MOA on my life list forever and this seemed like the perfect time to do it. I left feeling super inspired by everything I saw. It's the kind of place you can return to again and again and see something new or see something in a different light each and every time.

-Autumn weather finally arrived and with it, cooler temps, which I was grateful for.

-We celebrated my husband's 60th birthday, which given the last few years of very serious health issues, is a milestone that at times I didn't think we'd see. A week later, we celebrated our 26th anniversary. 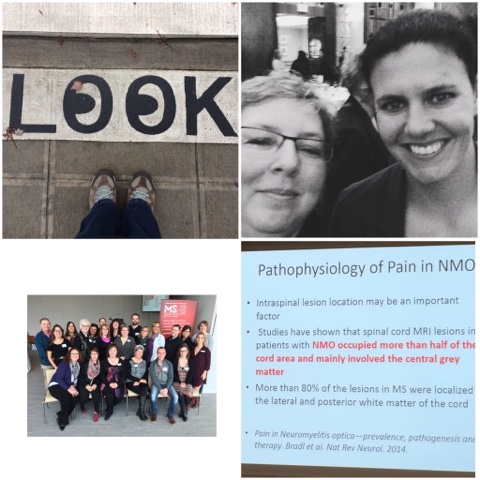 -I started off the month with a few days in Seattle with my best friend, who was having cornea transplant surgery. It was interesting to see how the US health care system works. One tiny bottle of eye drops cost over $200 down there. It would have been $35 at home. *boggles*

-I volunteered at the Women Against MS (WAMS) annual luncheon and got to meet Canadian soccer two time Olympic bronze medallist, Christine Sinclair. I am a huge fan of women's footie! Loved crossing that off my life list!

-The MS Ambassadors had their annual forum at UBC. It was a great day connecting with fellow ambassadors, learning about the changes being made to how the MS Society operates and to hear about some current research being done. 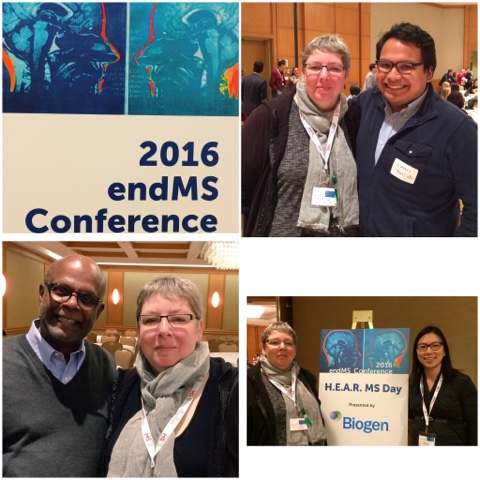 -The first week of December I flew back to Toronto because I was invited to attend both HEARMS Day and the ENDMS conference. It was an incredible opportunity to connect and learn with researchers from across Canada and from around the world. It goes down as one of the best experiences of my life. I will be writing more about it in the new year.

-I finally got a chance to meet my fellow SomeoneLikeMe.ca blogger, Juan Garrido. We've been writing for the blog for together for over 4 years, so it was really wonderful to finally spend some time with him.

-I also reconnected with Dr. Sam Davis, who is a professor of neurology and neurosurgery, as well as a researcher at McGill University. Sam was the Chair of the first grants review committee I served on (Personnel) and is such a kind and lovely man. We caught up over breakfast.

-I also got to catch up with the fabulous Dr. Karen Lee, Vice President of Research for the MS Society of Canada. She's expecting her first baby in the spring and I'm so excited for her!! 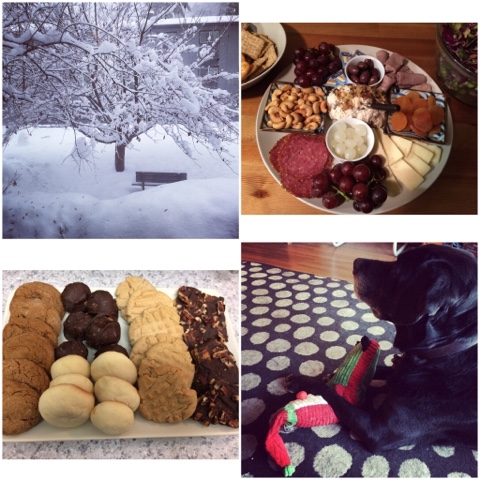 The rest of my December was snow, (which is unusual for Vancouver and the surrounds. It started the day I left for Toronto and pretty much has continued ever since. We are more than ready for it to be gone.) baking & celebrating.

New Year's Eve will mark 27 years since our first date. (A hockey game-what else? We are after all, Canadian.) It seems crazy to think it's been that many years.

All in all, it's been a challenging and very full year. 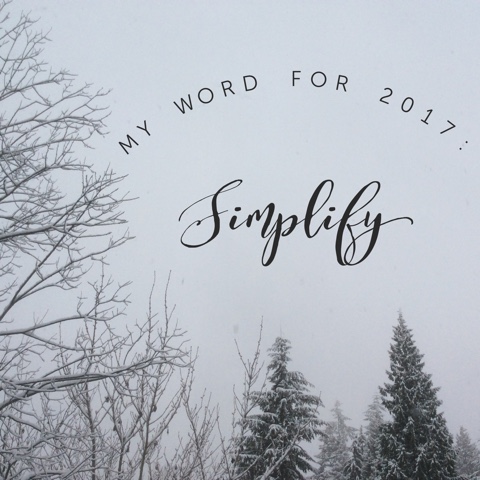