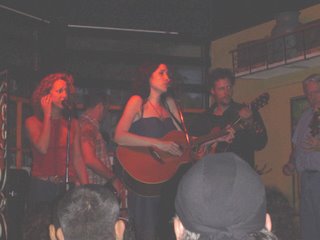 Last night was the debut of Farrell's album "A Town Called Hell". She and her band, the Widowmakers played at Cafe Montmartre, down on Main Street in Vancouver. The place was jam packed by the time they went on.

She was brilliant and I just adored the guy on the fiddle, Ewan Clark-I want him to come hang out in my livingroom and play for me! The only downside to the venue was the lighting which made for crappy pictures, as you can see. It would have been nice to get some good shots. There was also there was a crowd at the back of the place who were talking so loud they almost drown her out at one point when she was singing a softer song. I couldn't believe how rude they were being!! But three cheers for the sound guy who turned her up to drown them out!

Anyway, it was really exciting to hear Farrell perform live. Her CD is due out next month-can't wait!!
at 7:49 am