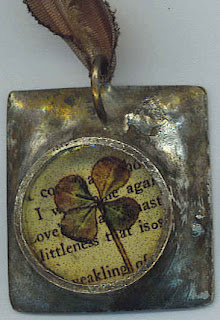 There are a couple things I wanted to share with you this morning. First of all, the talented Stephanie Lee has just joined the blogging world. Her new blog is called Semiprecious Salvage. Stephanie made the pendant shown above. It was the piece I bought at this year's Artfest. I just love it! Go check her out! 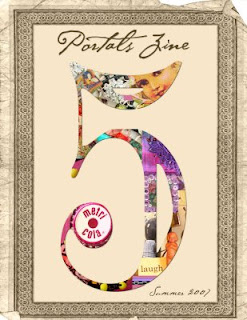 The other things was that I just received my copy of Portals Zine, issue #5. It's jam packed full of great articles and wonderful art. Heather has also added some tutorials for making mixed media charms for those of us who can't get enough of those little handmade trinkets. If you haven't checked this publication out yet, you have no idea what you're missing out on!

On a completely random note, on the recommendation of my best friend, I rented a series on DVD called "The Lost Room" and started watching it last night. Here's the synopsis from the official website:

"In the 1960s, there still were hundreds of motels with thousands of rooms along Route 66 as it twisted its way from Chicago to L.A. and back. None of them stood out from the rest until one day when some unknown event at the Sunshine Motel transformed ordinary things into items of wonder.

Room 10 of the Sunshine Motel and many of its mundane contents — a pair of scissors, a comb and so on — gained unique and inexplicable properties on that day, transforming them from ordinary objects into indestructible Objects.

The Scissors can turn and rotate any item in three dimensions. The Comb stops time for 10 seconds when you run it through your hair. The Eyeglasses inhibit all combustion in a 20-foot radius. The Room itself is an unchanging haven and a portal to any destination. But it can also take that which you value more than your own life.

To possess an Object is to possess its power.Using each Object exacts a physical, emotional or psychological cost from the owner. Just holding one makes you a target for murder. For decades, maybe since the first moment that the Motel Room was ripped from this reality, cabals have formed to collect all the Objects.

As always, some just want unlimited power, and they believe getting all of the Objects will give them that. Others want to prevent anyone from ever again using the Objects.And though their motives vary, the cabals' tactics are similar. It's said that while you have one of the Objects, you have no friends, only people waiting for an opening."

Police Det. Joe Miller was introduced to the Motel Room when a fatally shot young man gave him one of the most powerful and coveted Objects of them all: the Key to the Motel Room. His life is immediately turned upside down when his young daughter becomes lost in the room. In his relentless quest to rescue his little girl, Joe becomes the target of shadowy figures who will stop at nothing to take from him his only hope of saving her — the Key.

You can learn a bit more about it here. I was hooked about 20 minutes in and now I can't wait to watch the rest of the episodes. If you're looking for something to amuse you during the TV wasteland that is the summer, rent it! It reminds me a bit of "Heros", which I love. It's fantastic!