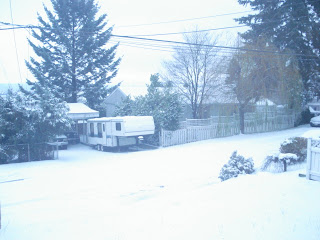 This is my view this morning. We had quite the sneaux (I'm not allowed to say the "s" word in this house) storm to kick off December. Despite living in "the frozen north", this kind of weather is not common here. Mostly we get through our winters in a polar fleece jackets except for the occasional cold snap. The white stuff never lasts long here and they say that tomorrow we will have rain and it will all be gone. Most folks don't even bother to shovel, opting instead to wait it out and let it melt or be washed away by the rain.

Last night our street got pretty busy all of the sudden and we couldn't figure out why. Turns out the big hill we are just off of was closed down and folks had to bail. Our street has a slight incline and we had front row seat to watch folks getting stuck and skidding sideways. Several people narrowly missed clipping parked cars. I saw one guy get out and push the car he was riding in. It started to drift sideways towards a parked car and to my amazement, he jumped between the two cars to push them apart! Guess he wasn't thinking about the fact that he was deliberately putting himself in the path of an out of control 2000 lb. mass of metal that had the potential to crush his legs! People are nuts!

At one point in the afternoon, we had a knock at the door. I looked out my studio window to see who it was and saw a young man in a tie. I thought he was from some church, trolling for converts, but it turned out he was from our local cable company, trying to convince people to switch their phone service. (Trolling for converts of a different kind.) I could not believe the cable company would send a young kid like this out in a snowstorm for something so stupid! I felt bad for the poor kid just trying to make a living. That's just mean!

My husband went bright and early down to the local tire store to get two new winter tires put on my car so we were all set. Of course we're not going out unless we have to. I am perfectly fine with driving in sneaux-I grew up in the home of winter on the prairies so I know sneaux. It's just everybody else I worry about. That said, today is a perfect day for me to organize all the bits in my new studio so I can get on with making art. I am also going to do a bit of purging of excess art supplies. I have a box labelled "Art Asylum" that I am tossing things into to take to Artfest 2008. I love that we can donate stuff and people can help themselves. I usually come home with some cool things to play with, gleaned from the art asylum. Like they say "One man's trash is another man's treasure!"

Oh and one more thing-the person I was looking for in my last post read my blog yesterday and responded within the hour so it's all good! I am so glad to have tracked her down.

Have a good Sunday everyone!

yes my husband tried to catch the car as it slid down our driveway in the snow...men...I missed your charm class but look forward to your class at the library...good luck on your purge bettyann waller coquitlam