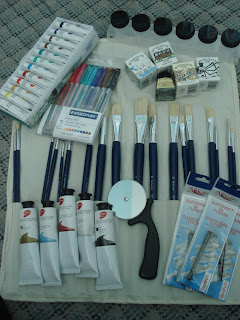 Since we "sprung forward" last night, the day started off earlier than usual. The guys and I decided to head to Vancouver for part of the day. We stopped in at Loomis (Well it used to be Loomis, but it's been bought out by a Quebec company so now it's De Serres. It's always going to be Loomis to me.) so I could purchase a bunch of stuff I needed for my classes at Artfest.

My friend Penn gave me a coupon which came in handy, seeing as I spent about $50. Look at the goodies! Everything except the pens, the box of small acryllics and the pizza cutter came from Loomis. (Anahata says we need a cheap pizza cutter and that we'll "wreck it good". I can't wait to find out how we do that!)

We needed roller ball pens and I found the Staedtler version so I had to have them Staedtler makes the BEST pens on the planet-they colours are pretty and they last forever!

I also have the world's saddest paintbrushes so when I saw this roll with a great variety included for $9.99 on sale, I had to have them. I am usually very good about taking care of my stuff but for some reason, I am not so careful with paintbrushes. Granted, once they are ruined, I don't throw them out, but recycle them into assemblages so they get a second life. I will try and be more careful about washing up this set. (Try being the operative word here.)

The inks were so adorable I couldn't resist buying them. My friend Diane and I are pooling our supplies and she bought a ton of inks for the class but the labels and boxes on these are just so endearing I splurged. They come from England. I bought the bottle tray in case I need to pour inks into anything to save or mix. The lids screw on tight so I won't have to worry about spillage. I will have to remember to pack my art apron though-it's going to be messy creative fun-I can tell!

I can't think of anything more happy-making than brand new art supplies. I am eager to open them up and play! 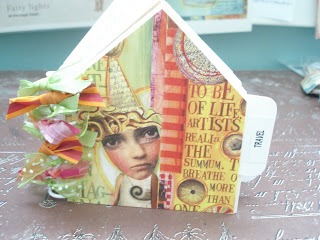 While I was waiting for it to be late enough in the morning that the stores would be open, I made this small journal for Artfest. The cover is made from postcards Teesha put out in the Art Asylum last year. I took some, not knowing that I would use them for and finally decided to cut myself a house shaped journal. The cover isn't quite finished-I want to add to it and alter it some, but you get the gist. I made some sectional tabs as well because I like stuff to stick out of my journal. I love when they get to the point they are what I call "chunky monkey"-stuff poking out all over and stuff with info and journaling and such.

After we went to Loomis, we drove part way around my beloved Stanley Park and then over the Lion's Gate Bridge into North Vancouver to Lonsdale Quay. We did some shopping and had lunch. Then we hit some dollar stores and I found the mother lode of double sided tape sources. It's one of the brands I have bought before and paid $6 a roll. I got them for $1 a roll! I bought 5 rolls in two different widths so I am set at least for the next few months. Next time I am in the neighbourhood, I will pick up some more-can't beat that price! If they can sell it for that cheap it makes me wonder just what the store paid for them in the first place!

So, I am wending my way to being organized and prepared for my trip. It's hard to believe it takes sometimes a month to get everything pulled together, but it does. Tomorrow I am heading back into Vancouver to buy some serious tools for another class. (I love tools!)

I am taking two classes for fun and one class to learn how to be more painterly in my work. That the goal I have for myself for the next little while. I love paint-it's relaxing to work with, but I am not a painter. I don't really want to learn how to paint, as how to use paint. I want to use it to enhance my work. Hopefully this class will help me do that! I saw the results from last year's class and it inspired me to give it a go. The best part is that in that class, I get to hang out with my friend Diane who makes me laugh.