Pedal to the Metal! 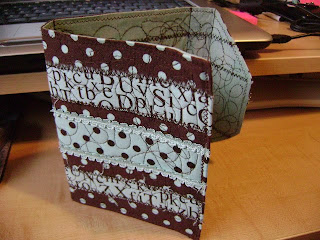 I spent the entire day yesterday in my studio! Yes I did! I woke up at 8 a.m., made blueberry pancakes and bacon for brekki, then grabbed my cup of tea and disappeared. *laughs*

I managed to get two book covers completed. I might have made one more, but it took me some time to decide which fabrics I wanted to work with. It's been some time since I've looked at my stash and everything looked good to me!

So the photo above is the front of the smaller cover I made. These fabrics are left over from a messenger bag I made for Kristen Steiner for an exchange I hosted two summers ago. ( I ended up writing an article about the exchange and it was published in Haute Handbags, in April 2007.) 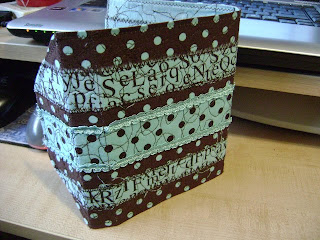 This is the back of the cover. I love this vintage aqua letter fabric. I am really pleased with how it's come out so far, though I've gone through a ton of thread. I think I need to whip down to Fabricana and get some monster spools and a few more bobbins. (How I hate winding bobbins-I need a bobbin faerie!) 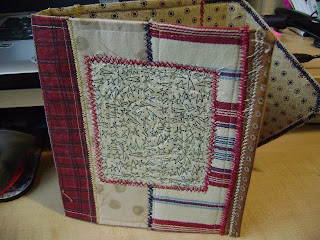 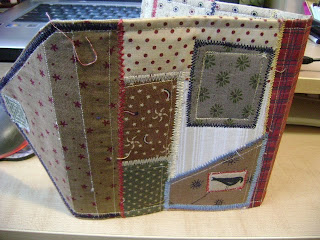 Here's the back of the cover. I will probably be adding a few more things to this one-I just found a few more scraps from my folk art fabric collection that would work nicely.

I still haven't added closure ties to the covers. I haven't decided what I want to use, so while I am digging through my ephemera piles for the next step, I'm thinking about it. 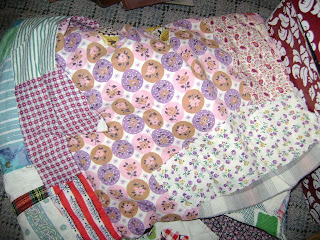 Speaking of digging through, when I went through the fabric trunk, I found this coverlet in the bottom. 10 or more years ago, I bought a quilt at a garage sale. It was zipped inside this fabric envelope (which I suppose was a sort of duvet) made from what I think is vintage pillow case fabrics and such. 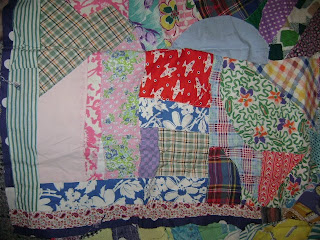 It's pretty hodge podge and loud, but if you look at it with an artist's eye, I am sure you can see the same potential I see for making some wonderful book covers! 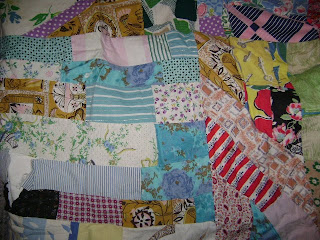 I especially like this section of aquas and that hideous mustard gold (which is a magic colour!) and I think there's enough in that section to get TWO covers cut. I just need some muslin to stabilize it...or I have some old flannel sheets in the hall closet that my mother in law gave us for Indy. Waste not, want not! I could just as easily use a strip of that as my base!

Yesterday I was having such a good time sewing that I actually forgot to eat till dinner time. Since it was a holiday, we just had finger foods, which was easy. Clearly though, I did not feed the art-making machine enough though-I was munching on apples and BBQ chips at midnight!

I think the most enjoyable part of this class so far is that there's no wrong way to do it. You just throw things together et voila! I also get to sew with the pedal to the metal, something that in quilting circles got me "the look" every time I did it. (My machine is quite loud when it's running full out.) I just have a super cheapo $100 bare basics Singer, that I abuse the heck out of. It's a workhorse. I've had it for 18 years and I think other than picking the lint out of the bobbin case every now and again, I've had it professionally serviced once. In this studio, you toughen up or die! *laughs*

Okay, it's time for me to make that thread run to Fabricana and then it's back to sewing like a maniac. I am having a blast! What better way to ring in the new year?!?
at 12:04 pm

I love the covers! The aqua blue fabric with lettering is very cool. I love your color combos and selections. I am all for petal to the metal sewing! xoxoxoxo

Nice covers! Mine were made of canvas and then I gessoed and painted with acrylics. I am going to sew something to some of the pages so I'm putting off the binding. HNY! Catherine

Really nice covers. Like the ribbons and the fabrics on the second one are beautiful. Can't wait to see some of the pages. taylor

your covers are great, and I also love your vintage quilt duvet envelope-thing! I think i need to go to more garage sales...