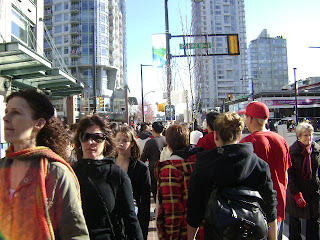 I thought I would give you a glimpse of the crowds in the downtown core these days. The weekend was insane with the hockey starting. This was taken in Yaletown yesterday, as I made my way from the train station, to the Stadium. 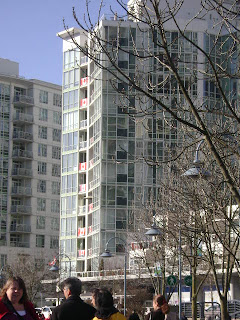 Everywhere you look, you see our flag. It's literally a sea of red and white, no matter where you go. One house in our neighbourhood has taken their Xmas lights and spelled out "Vancouver 2010" with them on the side of their house and then there's a huge flag hanging in their living room window. Everyone is wearing their heart on their sleeve... 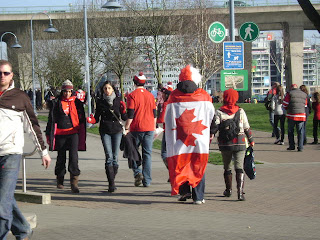 ...Or their flag on their back. Some, like this guy have just strung their flag around their neck, but last night, when I was working the security check point, I noticed that someone is now making Canadian flag ponchos. It's the flag material, but just shaped into a poncho, for easier wearing. It sure doesn't take long for people to figure out a way to make a buck! 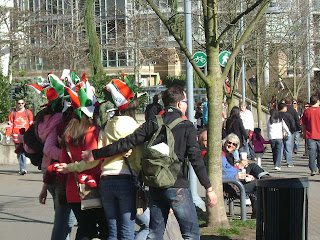 I took these photos on the seawall around False Creek where I was sitting with a friend and follow volunteer, enjoying my lunch in the beautiful sunshine and people watching. I think it was about 15C here yesterday. Gorgeous!

I forgot to mention that on Friday, I randomly won a pair of tickets to the Swiss vs. Norway hockey game on Saturday. Of course I was working so my guys got to enjoy those tickets. They were seated in a suite and had the time of their lives! (Good to know my hard work is paying off.) I told them they owe me a very nice dinner out. I think they said something about the Keg! YAY!

Last night's feature Province was Nunavut and the concert was put on by Loverboy & Trooper. I saw Trooper last summer at the World Police & Fire Games and they were great. As I mentioned, I was outside working at the security checkpoint, so I don't have any pics of the festivities for you. Today, day 11, I am off, so you'll have to check back for a report on day 12! In the meantime... 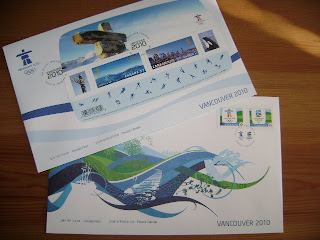 ...I promised a giveaway and here is the first one: I have two first day covers of Olympic themed postage. I saw these in our post office and thought they were really cool, so I bought myself some and picked up some extras to share with a lucky reader! 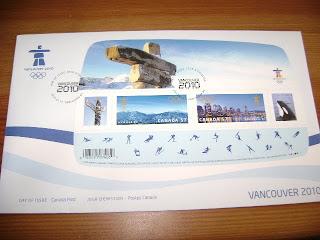 The first one features Whistler/Vancouver. The entire oval shape is the stamp pane and it has the 2010 cancellations on them. On the back side of the envelope is an explanation of the stamps. 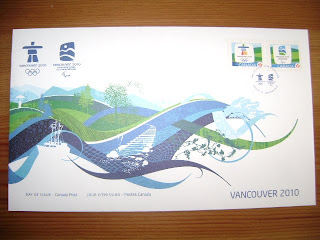 The second one features the Olympic and Paralympic emblems and the blue and green artwork and colours of the 2010 Games. Again, the back of the envelope explains the stamps.

Both first day covers will go to ONE lucky winner.

So here's the scoop:

ONE entry per person.
To enter the draw, leave me a comment telling me where you are from and what your favourite 2010 Olympic moment has been so far.

I will be drawing a name and announcing the winner on Friday, Feb. 26th. Please be sure that I have some way of emailing you if you win so I can get your snail mail addy and send them off to you!

Hi! I am loving your updates! Makes me feel closer to the action. I am from Raleigh NC and so far my favorite Olympic moment was when the men's Curling team(USA) FINALLY won a game!! I was so excited for them! I have to admit that curling is my favorite event to watch. :) And of course I like all the behind the scenes stories about the athletes.
Eva H
http://moonchildsrants.blogspot.com/

It sounds like you are having the time of your life. I eagerly await more updates and Olympic art!! Hugs

I've been fortunate to visit Vancouver a number of times, so my favorite scene of the broadcast is always when they show the landscape, places I've been, the sun gleaming off the buildings, etc. However my favorite "moment" other than the entire opening ceremony of course, came last night, when Virtue and Moir won the GOLD in ice dancing. They were beautiful, and the emotion of the crowd was so touching. It was just feel good all round. Yay! I would love to win the draw for the awesome envelopes, such lovely artwork. Your updates make watching the Olympics even more special. I'm in Austin, TX.
xoxo

Wow -- what a cool thing to share! I would love to add them to my "special stamps."

I live in Ann Arbor, Michigan, and as much as I have enjoyed the aerials, and the ice dancing, and how glad I am for Canada to have a nice fat handful of gold (so far!), I think my favorite Olympic moment was the whales swimming under the floor during opening ceremonies.

OH...this would be perfect in my 2010 remains of the day journal. I Love watching the olympics...so hard to choose just one, but I did love when Lindsey Vahn won the gold and found her husband and cried and kissed him and he said...stop crying and go get your photos. So sweet.

I thought of you when Canada lost to the US in hockey...you are the only Canadian I know and even though I was glad the US won...I felt a little sad for Canada. I always feel sad for the non winning team cause I am a softie like that.

It is hard for me to pick just one highlight because these olympics are special for me on both sides because I am from the US and my sweetheart is a Canadian citizen who is a legal resident of the States. I loved it when the Canadian dance skaters won last night and I loved it when the US won the hockey game. I am for everyone, just not the US teams.

Hi Lelania! Thanks for all of the great behind the scenes info - it is fun to live vicariously! My favorite moment - besides swelling with pride at our magical opening ceremonies or watching the ice dance gold medal win (tears!) was watching a Vancouverite try desperately to help/guide/advise anyone in line for the Canadian North Pavillion, persisting after running into one fellow west coaster after another. It made me so proud of our city and how everyone is so excited and invested in making the games a success! We may be a big city but we have small town hospitality these days. Enjoy the rest of the games - go Canada go!

Well, you know I'm from Seattle. My favorite Olympic moment is the Native dancing at the opening ceremonies. I've never witnessed Native dancing in such a prominent forum before. I've grown up seeing Native dancers at many local and family events. There is a power and pride in seeing my people to be honored in such a way. I'll remember it always.

Hey girl, I have so enjoyed reading about your adventures in Olympic Land. Go Canada! My favorite parts so far? All of the skiing and HOCKEY! Woo Hoo! Wow, you are going to have the best ROD journal EVER!

i've been following your posts and loving your inside scoop!! so excited for you and this cool adventure of yours.

highlight... probably that men's jump and cross country combined. oh, so many cool moments to choose from!