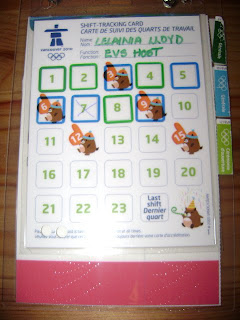 I keep forgetting to tell you about one of the perks of being an Olympic Volunteer. We have this card on the back of our accreditation (ID) that tracks our shifts. Every time we check in for a shift that has Mukmuk (one of the Olympic mascots) marking the square, we get a gift.

You will also notice that I have one square where there's an "X" through the box. That was the day I won the free tickets to the Swiss vs. Norway Men's hockey game that I mentioned the other day. Yes, sometimes we also win random prizes! 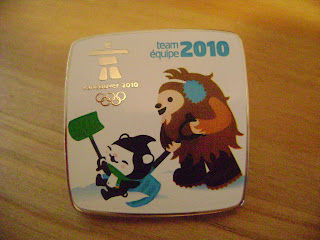 The first gift was this pin with Miga and Quatchi. 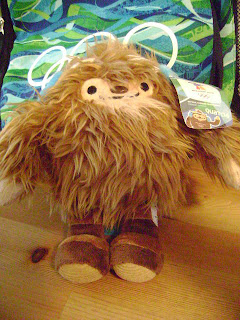 Gift #2 was a stuffed Quatchi. (Or you could get a Miga, but I thought Quatchi was cuter.) Indy decided he liked this one and tried to claim it for his own, but I knew he'd just rip it to shreds, so I didn't let him have it. I suppose it will take up residence in the studio. 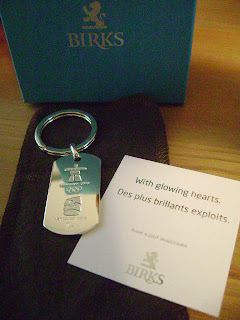 Gift #3 was a silver plated key chain from Birks. The front has both the Olympic and Paralympic emblems on it. 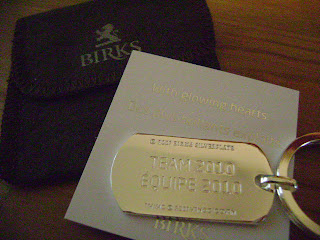 On the back it says "Team 2010" in both English and French. I am going to take it off the ring and put it on a chain and wear it as a pendant. I think using it as a key chain will wreck it and I'd get more use out of it if I wore it instead. It looks like a dog tag. 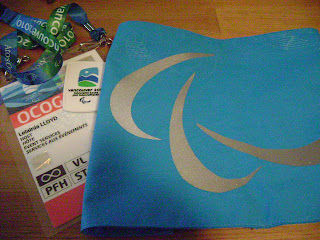 Yesterday I also went and picked up my Paralympic uniform conversion kit. The blue panel snaps onto the back of my jacket, covering the Olympic rings with the Paralympic agitos. The patch goes on the front after I take the Olympic logo off. (It's attached by velcro.) I also got my new accreditation. (Identification.) I'm all set!

The Paralympic Opening Ceremony takes place on March 12th. It takes 2 weeks to change over all the logos from the Olympics to the Paralympic logos. It's an entirely separate entity, so anything that has the Olympic rings on it is replaced with the agitos. It's a big job changing out all the signage. 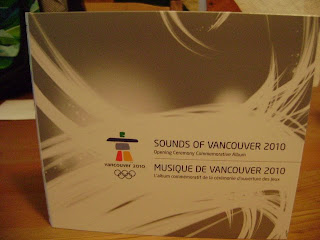 While I was at the accreditation center, I discovered that they've produced a CD with all the music from the opening ceremonies. While "We Are More" is on there, the only songs not included are k.d. lang's Halleluia, which she released independently (I already got it through iTunes, though.) and "Un Peu Plus Haut" by Garou. The CD was $20 CDN and I *think* you can purchase it locally at any official merchandising stand and perhaps at the Bay as well. Online, those of you in the US can find it here.


It's amazing to think that there are only 6 days left and then the Games will be over! The time has flown by so quickly. It was really nice to have the day off yesterday so I could see Canada win GOLD in Ice Dance! That's been a long time coming and such a huge accomplishment.

Don't forget to leave a comment on my giveaway post. There's still time, as I won't be drawing it till Friday.
at 10:03 am

so much fun! we have been enjoying watching it each day...so glad you are having such a good time!!!!

I was going to say exactly what Liz said -- So much fun to get to see behind the scenes through your eyes (and lens).

THANK YOU for sharing all of this with us!

I love the blues and greens chosen as the Olympic colors.