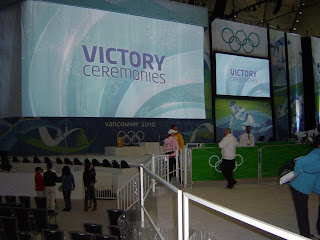 Last night found me working on the floor level of the stadium. I was just outside what I refer to as "the mosh pit". It's not a true "mosh pit"-there's no "moshing" allowed, but it's an area that spectators who are awarded special tickets, either by winning them up at Whistler as part of a sponsor promotion or being given them, at random because of their costumes and lively spirit once they arrive at the stadium. It allows them into the floor area directly in front of the stage for the concert and the chance to be seen on TV, during crowd shots. It's really popular-everyone wants to see the show from that vantage point! 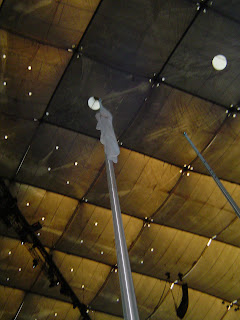 I got to stand directly under the Olympic flag and just for my own amusement, I made sure I touched the pole. It's not like I'll have that chance twice in a lifetime! 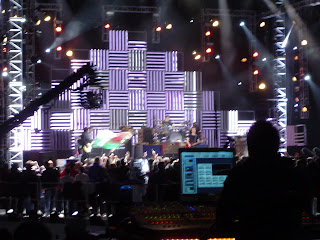 While I was waiting for the festivities to start, this young couple came up to ask me a question and we got talking. The young woman works for VANOC and she asked me about my volunteer experience, so I was telling them about being given the honour of helping to queue up the athletes for the Opening Ceremonies and then seating and sitting with them and all the famous people I'd had the chance to see (and in some cases talk to!) in person.


I went on to explain that I'd had to work very had to be healthy enough to be able to participate in the Olympics, having gone through chemo all of spring and summer last year and then a steroid infusion two weeks before my volunteering began. The young woman started to cry and her boyfriend explained that she had just been through chemo too. (She had cancer, I have MS.) She's far younger than I am (20 something) and my heart went out to her. I know how difficult it is to go through chemo-it's hellish. In a few minutes though, I had her laughing again and found out they were huge Stereophonics fans. (That's the band that played last night.)


I asked them where they were sitting and it turned out there were just above the area I was working. When my supervisor came around, I asked him for a pair of those special "mosh pit" tickets to give them. He was so great and said he'd man my post while I went up and gave them the tickets and the good news. They were thrilled!


After the concert was over, they found me again to thank me for getting them the tickets. They had a wonderful time. That made me really happy and I gave them my blog addy, so they may even be reading this today! *Waves to new friends*


Another nice thing that happened yesterday after the concert was that a spectator came right up to me and said "After this is over and you've rested up, would you please go online and register to volunteer for the 2012 London Olympics? I've been watching you and you are doing a fabulous job. We need you!" How nice was that?!? They aren't kidding when they say the whole world is watching. I've always been of the school that anything you do for anyone makes a difference. It really is true! As much as I would love that, I don't think London 2014 is in my future-my pockets aren't that deep. 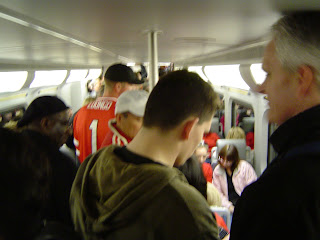 Commuting in and out of the city yesterday was a bit of a nightmare. (I am classically understating it, as always.) Going in, I got to Waterfront station only to find that in order to connect to the Canada Line to get to my security check point, I had to line up OUTSIDE the building. That's never happened before. I knew if I did that, I would be late, so I hopped back on the Expo line and backtracked to Stadium. From there I somehow missed the East checkpoint (The crowds were huge and I guess I got swept right past where I should have turned) and ended up hiking all the way to the West one. *sigh*

The photo above was from my commute home. It doesn't even do justice to the sardine-like conditions of the West Coast Express. My claustrophobia was starting to kick in while we waited for the train to leave the station so I just started cracking jokes and making everyone laugh so we would all make it home in good spirits. Let me just say that it's not fun to be on your feet for 10 hours straight and then have to ride standing up in a hot, packed train for 1/2 hour. I think the transit system has reached it's critical mass. I am kind of dreading today's commute. I've never seen it as bad as it was yesterday and today there are THREE hockey games next door to my venue, the biggest of which is the Canada vs. USA game. It's going to be nuts down there today!

I think Volunteering is becoming the newest Olympic event and it's a marathon, not a sprint! Seriously, I've dropped about 6 lbs. since I started, between the stairs and the food. It's an adventure, to be sure!

This post made me cry. Cry for how generous you are and also for how you were recognized for what a great job you are doing. I am so proud of you!!! xoxo

Just finsihed reading all your posts so far, this was so beautiful about the young couple. Just goes to show what you find out just by being friendly and talkative. Meet the most wonderful human beings that way. I am worn out from just WATCHING the events, and every night I think about how tired you must be, being there, but what an experience of a lifetime. I'm so proud of you too, and for you. xoxo