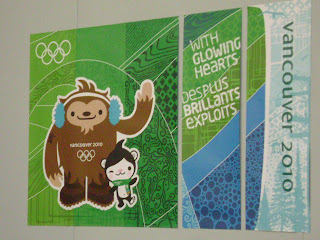 Ah, so Day 8! So I have a bit of everything today. 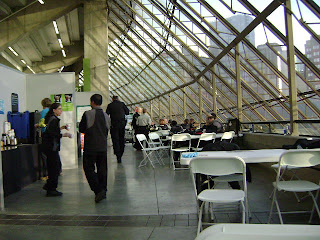 This is the food services area in the Stadium, where we eat. The other food service area is across the street, as there are so many volunteers at this venue (1300+) so they split it between the two locations so we all fit. Sadly though, the food is nothing to write home about. Not a green vegetable in sight. I'm subsisting on dinner rolls and bananas. (And no, I am not kidding!) 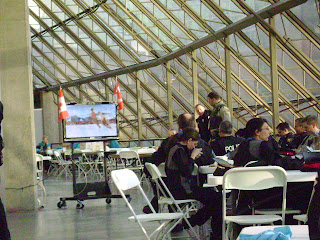 I found it amusing that someone hung Canadian flags off the tv for good luck! These are some of our Police forces from all over Canada, taking a break. They've worked very long days. 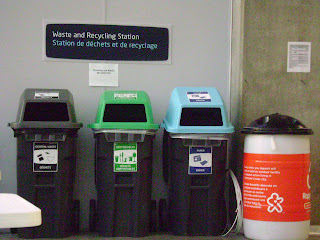 VANOC made a commitment to make our games the greenest one yet, so throwing out garbage has become it's own Olympic event. It's like an IQ test to see if you can correctly dispose of your garbage. For example, the utensils (knives, forks, spoons) are actually compostable! Usually they are simply recyclable, being melted down to make something else, but in this case, they've used a material that breaks down and can go back into the earth! I've been there for 9 shifts now and I still have to concentrate when I do it. *laughs* 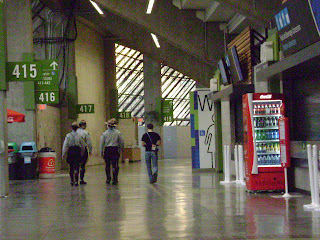 When you're walking the private areas of the concourse, you see sights like this. (RCMP officers in the dress uniforms. The ones in Red Serge had gone by just minutes before.) 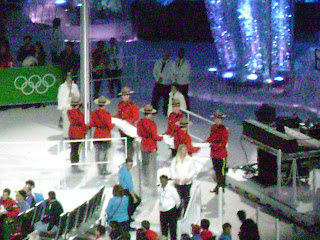 Every night as the Victory Ceremonies start, the RCMP walks in with the Olympic flag and it's raised as the Olympic anthem is played. 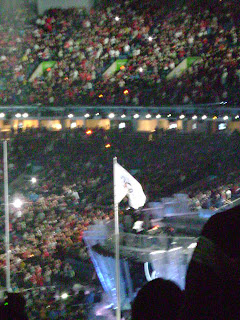 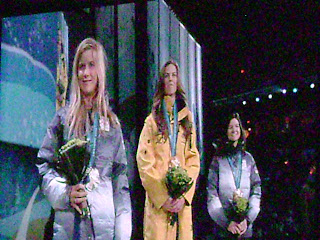 One of the medals ceremonies. I believe that's Lindsey Vonn on the right. (Yes?) 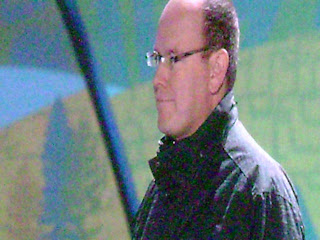 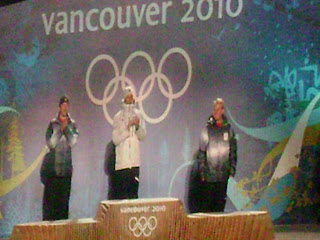 Winners of the Men's Super G.
Friday night was North West Territories night and the concert was Theory of a Deadman. While I saw the medals and the NWT presentation, I didn't see the concert. I was busy up on the concourse, answering questions and directing spectators.
Next up, Day #9!
at 8:17 am

I just want to let you know that I have been following your blog everyday and love reading about the olympics. I know you are missing your ROD journals but what an opportunity you are having now......once in a lifetime thing. Nancy Lynn