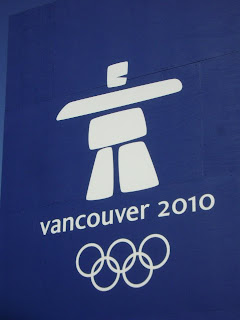 Hello, hello! As you all can imagine, I've been crazy busy and just found a small pocket of time to post again and catch up.

I had Saturday off, as it was conversion day, meaning the staging for the Victory Ceremonies was being set up. Sunday was the first Victory Ceremony, for Canada's first silver medal, thanks to Jennifer Heil and it was BC night, so Nelly Furtado was giving the concert afterwards.

I was stationed outside with a bullhorn directing spectators to the appropriate gates and then later helping to direct them to the skytrain footpaths. While I was talking on the bullhorn, this lady came up to ask about gate access and it was Nancy Greene! It was lovely to see her. (She was one of the Olympic flag bearers in the Opening Ceremonies.)


Yesterday, Alexandre Bilodeau was honoured at our second Victory Ceremony, having won Canada's first GOLD medal! The crowd was very excited and the noise was incredible inside the stadium when his medal was presented. When they played our National Anthem, you could hear the voices raised above the music. What a great moment that was! The concert featured talent from Quebec and while I can't tell you who it was (I never did find out) he did covers of several bands.

This evening, Mike Roberson will receive a silver medal at our third ceremony and tonight is the province of Nova Scotia's night so that means THE BARENAKID LADIES will be performing!! I know that's going to be a great concert! 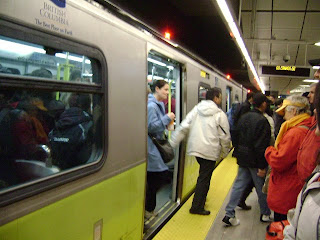 Despite the predicted wait times, prior to the Games starting, our transit system is doing a fabulous job at moving the crowds in a timely matter. I have not had to wait beyond 10 minutes anywhere and the skytrains are not packed like I feared they would be. Of course tonight the hockey begins and my venue is right next door to Canada Hockey Place, so we'll see...it's going to get alot busier with two venues egressing at the same time! 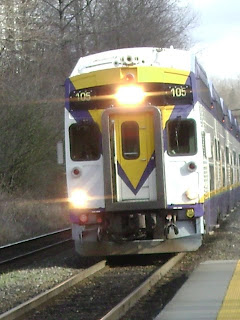 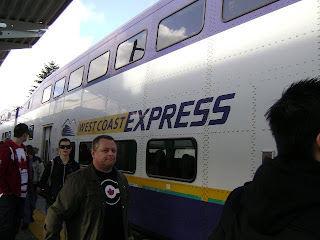 On Sunday, I took the West Coast Express train into the city, just because I could. I've never ridden it and from the station I boarded at, to downtown took a mere 26 minutes. Since it was Sunday, it was quite crowded on the train, but by sheer luck, I ran into my husband's cousins, so it was a nice trip in, chatting with them and sharing my adventures. 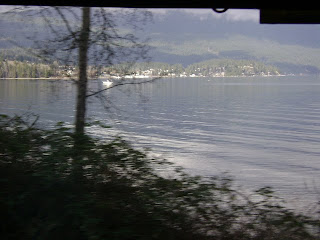 The view from the train were pretty. I just wish it had been less crowded, so I could have found a seat and taken better photos. Perhaps another time.

Downtown there are tons of Olympic Sponsor companies handing out free stuff. Sometimes it's flags or pin and yesterday in Yaletown, it was toques! If you're looking for good times, head downtown-there's tons to see and do!

Okay, I have to run, but again, thanks to everyone for your comments and emails. It's nice to know you're enjoying my reports. I feel like I'm Mike from Canmore or something! *grins*

what memories you are making...to part of what most of us can only watch on TV is amazing!!!

Hi Sweet Girl,
I had goose bumps when the crowd sang O Canada last night. Awesome! And of course I was thinking of you. So happy that things are fun and exciting for you. Got my package today. Have just peeked inside as I can't get Helen away from it...she must smell Indie!
Will write more later,
Your new US friend Tracy

Love your on-the-scene reporting! and photos!

Lucky you, getting to meet Nancy Green. I've been a fan since when back in the days when she did Mars bars commercials (and of course, all that great skiing!) Great photos, love hearing about your Olympic experiences!!!